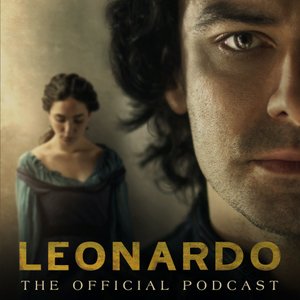 Welcome to the world of Leonardo Da Vinci. In this, the official podcast to accompany the murder-mystery period drama starring Aidan Turner, we’ll do a deep dive behind the scenes with the cast and crew, as well as discovering more about Da Vinci’s art and life from the curators and historians who know him best.We follow the dramatic revelations of the series episode-by-episode, bringing you exclusive and revealing interviews with Aidan Turner, Matilda De Angelis and Freddie Highmore, as well as series co-creators and writers Frank Spotnitz &amp; Steve Thompson, and director Dan Percival. Hosted by television presenter and Leonardo enthusiast Angellica Bell, join us as we examine what it is about Da Vinci that makes him and his art so precious 500 years on from his death. 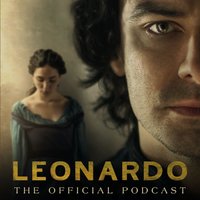 Learn more about the life and art of Leonardo Da Vinci and follow along episode-by-episode with the upcoming drama series Leonardo, starring Aidan Turner. Subscribe now to Leonardo: The Official Podcast for exclusive behind-the-scenes interviews with the cast and creators, historians and curators of Da Vinci’s priceless paintings. Episodes twice weekly from 16 April.

Welcome to a Renaissance world filled with murder, intrigue and a woman erased from history as we begin our episode-by-episode follow along with Leonardo, the drama starring Aidan Turner. We look at what is based in fact, such as Da Vinci’s sexuality, and where dramatic license was used, including why the drama developed Caterina’s character, the mysterious woman from Cremona.. Guests include Aidan Turner (Leonardo), Matilda De Angelis (Caterina), Frank Spotnitz (Co-Creator/Writer), Steve Thompson (Co-Creator/Writer), Dan Percival (Director) and Martin Clayton (Head of Prints and Drawings at the Royal Collection Trust). Hosted by Angellica Bell. Produced by Sony Pictures TV and Sony Music’s 4th Floor Creative, in association with Lux Vide. To find out more about that royal collection of Leonardo’s artwork, visit Leonardo da Vinci: A Life in Drawing: (rct.uk)

Masculinity is the theme for Episode 2, as we explore what it was like if you were a gay man living in 15th century Italy and portrayals of male characters on screen today. As well as following along with Episode 2 of Leonardo the drama which sees Da Vinci arrested for sodomy, we get the facts behind that episode’s featured artwork, Da Vinci’s Ginevra De’Benci. Guests include Freddie Highmore (Executive Producer / actor who plays Stefano Giraldi), Catherine Fletcher (Renaissance historian and author) and Eve Straussman-Pflanzer (Curator of the Ginevra De’Benci painting, National Gallery Washington DC). Hosted by Angellica Bell. Produced by Sony Pictures TV and Sony Music’s 4th Floor Creative, in association with Lux Vide. To find out more about the Ginevra De’Benci artwork, visit https://www.nga.gov/collection/highlights/da-vinci-ginevra-de-benci.html

The Art of the Polymath

The relationship between art and the audience plays out as we hear the challenges of recreating Da Vinci’s masterpieces for the screen, from director Dan Percival and Leonardo himself, Aidan Turner, who also happens to be a keen painter. We’ll discover the complexities involved in casting and draw back the curtain on Da Vinci’s theatrical spectacular that plays out in Episode 3 of the drama. Plus, exactly what does it mean to be a polymath? Guests include Aidan Turner, Matilda De Angelis, Victor Jenkins (casting director), Dan Percival (director of Leonardo) and Waqas Ahmed (Polymath / Founder of the Da Vinci Network).

We take a close, and at times uncomfortable, look at what life was like for women in the 15th/16th century as we follow along with Episode 4 of the drama Leonardo. We explore the societal pressures on motherhood and the associated health risks, as well as the limited career choices for women. Plus, filming in the time of Covid and how safety measures implemented for Leonardo on set in Italy became an industry blueprint. Guests include Matilda De Angelis (Caterina), Catherine Fletcher (Renaissance historian and author), Corrado Trionfera (co-executive producer Lux Vide), and Dan Percival (director).

Money, Music and The Last Supper

We investigate the relationship between Leonardo Da Vinci and his patrons who paid for him to work, even though he'd often tend to get distracted by the details rather than finish a commission. The Last Supper was completed but started to crumble quickly due to Da Vinci’s experimental art techniques, yet it remains an emotional piece for many to witness. And so we’ll delve deep into how those feelings are heightened on screen thanks to the music that plays out alongside the drama. Guests include John Paesano (Composer), Freddie Highmore (Executive Producer / actor Stefano Giraldi), Catherine Fletcher (Renaissance historian and author), Frank Spotnitz (co-creator/writer) and Steve Thompson (co-creator/writer).

The Devil is in the Detail

At the dawn of the 16th century, Leonardo Da Vinci found himself tied by patronage to Cesare Borgia. It’s a tumultuous time as Leonardo turns his attention to weaponry, and he changes the future of map drawing with his birds-eye-view detail for The Map of Imola. Plus, he begins work on the Mona Lisa, so we look at the real life of the woman who is front and centre in that infamous painting and talk to the actress tasked with bringing her to life on screen. Guests include Aidan Turner (Leonardo), Matilda De Angelis (Caterina), Max Bennett (Cesare Borgia), Maria Vera Ratti (Lisa del Giocondo / The Mona Lisa), Martin Clayton (Head of Prints and Drawings at Royal Collection Trust), Frank Spotnitz (co-creator/writer) and Steve Thompson (co-creator/writer).

Leonardo Da Vinci wasn’t the only eventual old master in town (Florence) in the early 16th century as young Michelangelo enters the picture. Their rivalry, or respect, comes under the spotlight as they are both commissioned to paint frescos on opposing walls in the Palazzo Vecchio. We’ll learn more about what’s survived of Leonardo’s Battle of Anghiari and how the relationships with his parents and friends affected and complicated his life. Plus, as the drama on screen intensifies, an insight into popular curses and superstitions of the time. Guests include Caroline Campbell (Director of Collections and Research, National Gallery, London), Martin Clayton (Head of Prints and Drawings at Royal Collection Trust), Catherine Fletcher (Renaissance historian and author), Dan Percival (director of Leonardo), Steve Thompson (Leonardo co-creator/writer) and Alessandro Arcangeli (University of Verona). Hosted by Angellica Bell.

Spoilers ahead as Aidan Turner, Matilda De Angelis and Freddie Highmore return as the truth behind Leonardo’s murder-mystery is revealed. We’ll also delve into the mystery of another of Da Vinci’s lost greats, Leda and the Swan, a painting that’s been called ‘soft porn for the renaissance’. Leonardo’s legacy is discussed as we bid series one farewell, and hear what didn’t make the cut for the finale of the drama. Guests include Aidan Turner (Leonardo), Matilda De Angelis (Caterina), Freddie Highmore (Executive Producer / actor Stefano Giraldi), Frank Spotnitz (co-creator/writer), Dan Percival (Director), Caroline Campbell (Director of Collections and Research, National Gallery, London), Catherine Fletcher (Renaissance historian and author) and Martin Clayton (Head of Prints and Drawings at Royal Collection Trust). Hosted by Angellica Bell.