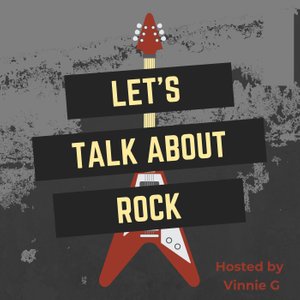 This is an informative rock and roll music podcast talking about an integral part of rock history as well as rock appreciation..

For episode 5, we talk about the best rock music from older and newer bands from the 2010's and proves why rock music is still alive and well. We also take a look at rock music's future going forward.

In the first episode of 2020, Vinnie talks about some of the week's rock news and discusses the rise and fall of influential 1950's disc jockey, Alan Freed.

In this episode, Vinnie talks about the Rock &amp; Roll Hall of Fame's class of 2020, and analyzing why each inductee is getting in, and also talks about some of the Hall's controversies going into the bureaucracy and the politics surrounding who gets inducted or nominated and who doesn't.

Let's Talk About the 27 Club

Episode 4 discusses the rock news of the week, and delves into the history of the infamous 27 club.

In our inaugural episode we talk about Motley Crue's reunion and talk about the greatest thanksgiving staples of rock radio, Alice's Restaurant Massacree by Arlo Guthrie.

In part 2 of the story of Elvis, Vinnie talks about Elvis' time in the Army, his relationships, most notably to Priscilla, his time in Hollywood, his famous comeback to his eventual death in 1977 as well as discussing the legacy and influence in music and American culture.

In Part 1 of this 2 part story, Vinnie talks about Elvis Presley, one of the most iconic figures in rock and roll music talking about his life growing up, his rise to fame at the regional level with Sun Records, and his rise to national stardom with RCA, all the way up to his draft into the U.S. Army. To Be Continued...

Let's Talk About the PMRC

In Episode 23, Vinnie summarizes heavy metal's first major battle against the establishment starting with the founding of the Parents Music Resource Center, and the creation of a list called the "Filthy Fifteen", leading to the famous testimonies by Frank Zappa, John Denver, and Dee Snider who became the voices of musical freedom of speech. This would all eventually lead to the creation of the iconic black and white Parental Advisory label.

In this second piece on FM Rock Radio, Vinnie talks about why long running rock radio stations nationwide have thrived despite the odds and gives his opinion on the current state of radio. While discussing, he goes into the histories of a handful of legendary stations to get an understanding on why many legendary rock stations nationwide survive.

On Episode 21, Vinnie talks about the history of one of the most iconic hard rock bands in the last 35 years, Guns N' Roses and its tumultuous history.

In the final installment of the Beatles saga, Vinnie discusses the making of Abbey Road, the finishing of Let it Be, the "Paul is Dead" conspiracy theory as well as the events of the Beatles breakup and the legacy of the Beatles in the 50 years since the most popular band in the world split up.

Let's Talk About the Beatles: Get Back

In Part 6 of the story about The Beatles, Vinnie talks about the first half of 1969 in the Beatles canon starting with the infamous Get Back sessions, working on songs that would eventually become part of the Let it Be album as well as talking about the famous Beatles rooftop concert. Also discussed in this episode among other things, the beginning of work on tracks that would eventually become part of Abbey Road, the appointment of Allen Klein as the Beatles manager leading to more divisions within the Beatles camp.

In this third Beatles-centric episode, Vinnie goes into detail on the making of one of the greatest rock albums of all time, discussing the story behind every track of the Sgt. Pepper's Lonely Hearts Club Band album and how each song was made.

In the second episode about the Fab Four, Vinnie talks in great length about the Beatles during the height of Beatlemania with relentless touring, and focuses on the growing evolution of their music that is present in albums like Rubber Soul and Revolver, as well as some of the behind the scenes fun facts of the filming of their classic films, "A Hard Day's Night" and "Help", and talks about some of their controversies such as the "more popular than Jesus" scandal.

Let's Talk About the Country Blues

In the second episode about the early days of the blues, Vinnie talks about the blues music styles of the 1930's with famous musicians of the Piedmont Blues like Blind Blake and Blind Willie McTell, and the legends in the Mississippi Delta, the heart of the blues, like Charley Patton, Son House, Lead Belly, and Robert Johnson who were not well known in their time, but left behind a legacy that opened the door for Chicago blues artists like Muddy Waters to help pave the way for what would become rock and roll music.

In this episode, Vinnie summarizes the early days of the blues long before Muddy Waters, long before Robert Johnson, and long before Lead Belly. He touches on some of the roots that would turn into the blues, talks about popular blues songwriters like W.C. Handy and discusses the African American female blues singers (Ma Rainey, Bessie Smith) that kickstarted blues' popularity in the 1920's, and touches on some of the earliest African American blues men of the age, long before Robert Johnson stood at the Crossroads.

In this first Beatles-centric episode, Vinnie talks about the early days of the Beatles, from the days of the Quarrymen, the Hamburg residencies, meeting manager Brian Epstein, their failed Decca audition, their eventual signing to EMI, Pete Best being replaced with RIngo Starr on drums, the making of their first 2 albums, and first singles, and the rise of the Fab Four with Beatlemania from the UK culminating in their eventual rise in the U.S. igniting the British Invasion with their iconic performance on the Ed Sullivan show.

In Episode 3 we discuss some of the rock news of the week and we talk about the history of FM rock radio.

We talk about the rock news of the week, and focus on the long history of Pink Floyd from their psychedelic underground roots to progressive rock giants.

© 2020 OwlTail All rights reserved. OwlTail only owns the podcast episode rankings. Copyright of underlying podcast content is owned by the publisher, not OwlTail. Audio is streamed directly from Vinnie G servers. Downloads goes directly to publisher.