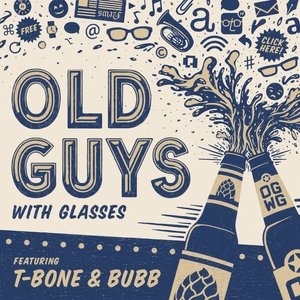 Two guys try to understand technology to avoid getting old.

Episode 74 - The Big Show (with special guests Pants and Beanpole)

T-Bone and Bubb (and Cho) along with special guests Pants and Beanpole, talk about Gene Wilder, buying stuff online, the perils of eBay, the color ways of various models of Jordans (what?), and trying to find true love by swiping right.

Episode 84 - Coming Through a Tin Pipe Into a Gas Range

Its the War on Christmas! T-Bone, Bubb and Cho talk about what music gets them in the Christmas spirit. App of the week starts at the top of the show as the guys talk about Mario Run. Next, the gents talk about what new hardware is worth dropping big bucks on and Cho ends up describing the iPad Pro as "Fantastic!". They move into to talk about the release of the new Star Wars movie and the impact of new technology on old media. Finally, they finish the show with a discussion about Santa Claus and how to use Siri with home kit.

Episode 80 - Is There Another Cho Out There?

Pokey and Lupine return from their completed hike up the Appalachian Trail to tell the guys all about it.

The guys start off the show with a recap our podcast history and their pending Square Space renewal.   They then tumble into discussion about using Apple Pay/NFC instead of the chip on new credit/debit cards; then fumble through how to use SIRI to send money.  Next, T-Bone states he has finally figured out what Twitter is for which leads to talk about how social media has been tainted by the contentious political season.T-Bone explains the drum core world in light of new documentary produced by Dwayne “the Rock” Johnson and talk of the new HBO show Westworld flows into riff on artificial intelligence, where we are at with computing and where we're going, and how those pesky ethernet cables fit in. Tip of the week: Cho invents the “Unsubscribe” button. https://www.squarespace.comhttp://www.fuse.tv/shows/clash-of-the-corps#homehttp://www.hbo.com/westworldhttps://en.wikipedia.org/wiki/Predictions_made_by_Ray_Kurzweil

T-Bone, Bubb and Cho discuss September's iPhone 7 Launch and try to decide which model to get.

Episode 76 - I Wanna Hang Out With You Guys!

T-Bone, Bubb and Cho start the show off with a discussion about the fall and the trials of being a stay at home dad. They then discuss their experiences with the new iPhone 7 and dig deep into the new camera features. After a short recap of apps inside of Messages, the guys discuss using the watch to unlock the Mac and what computer Bubb should get next, which leads into a riff on the end of using physical media. They round out the show with talk about Apple releasing an Echo competitor, other potential new hardware on the horizon and after app of the week, Bubb begs the guys to stay after the show  Apps of the week-NFL-Jib Jab-AG Drive

Episode 79 - Always Feels Just a Little Slimy to Me

We welcome special guest the Spaz, dive into a beer discussion and revisit an episode from last year at Saucony Creek. Next, the guys discuss Elon Musk's pronunciation that we are living in an simulation which leads to another conversation about the show WestWorld and where we are in robot evolution.  We then attempt a SIRI vs google now comparison, wind down with a recap of the Samsung exploding phone debacle then finish with app of the week.

Our good friend Sheen visits the studio to be our third mic. Topics include revisiting Mari's Run and the upcoming Nintendo Game system; A long chat about current and past Star Wars movies, including rating best to worst from all three of the gents; And Bubb reviews his Casper mattress. We finish with some our favorite apps.

The guys say goodbye to Cho and recap the Christmas season. They talk about the 10 year iPhone anniversary. T-Bone finally falls in love with Alexa which leads into talk of favorite technology of 2016. Bubb speaks about his new Casper mattress and then there's some chat about new tv shows. The guys finish up with hopes for the new year and T-Bone finally figures out what twitter is for!

T-Bone and Bubb talk about racial profiling, fear, freedom and riding the bus. They also talk about Twitter and the delivery of news, Cho explains his new TV and it's "Smart" features, and they discuss the sale of Yahoo to Verizon. Finally, the guys discuss Pokeman because it's required by the podcast gods.

Episode 67 - Crank the AC and Close the Deal

T-Bone and Bubb figure out the circumference of a softball and talk about Siri, Airport routers, bluetooth speakers, home security devices, Amazon Echo and the possibility of any new hardware being announced at WWDC. They also ponder the inextricable relationship between science fiction and technological advancement. Finally they close out their topics with the new Captain America and X-Men movies. App of the week rounds out the show.

Episode 64 - Always Someone With a Bigger Snake

T-Bone and Bubb revisit the topic of Bubb's old three speed bike, talk about the impending legalization of marijuana, and discuss the planned exploration of Alpha Centauri. T-Bone calls Tim Cook one of the great inventors as they talk about Elon Musk again, this time focusing more on Space X and less on Tesla Motors. They visit T-Bone's Corner as T-Bone brings home some new kit, and Bubb choses Nokia Snake as his app of the week.

© 2020 OwlTail All rights reserved. OwlTail only owns the podcast episode rankings. Copyright of underlying podcast content is owned by the publisher, not OwlTail. Audio is streamed directly from Old Guys with Glasses servers. Downloads goes directly to publisher.