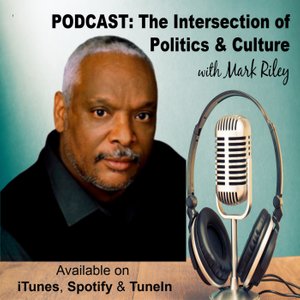 Mark Riley: The Intersection of Politics and Culture

Veteran broadcaster Mark Riley's podcast digs deeper into your daily news, politics and culture. With 40 years on NY Radio airwaves and global TV outlets, he has interviewed just about everyone... from heads of state to musicians and entertainers. Drawing from this vast knowledge base, Mark Riley adds his unique ability for storytelling and political analysis. Add critical thinking, and Mark Riley transforms complex issues into thought-provoking, easy-to-digest edu-tainment. The Intersection of Politics and Culture with Mark Riley is a stimulating podcast that will change forever the way you look at your world of fast-paced news feeds, tweets and soundbites.

Climate Change and the Green New Deal. We say we love our children, but do we love them enough to change how we live? Right now, the answer is 'no,' and our kids know it! Millennials and Wanderlust – how leisure travel can teach us to better understand the diverse world we live in. R.Kelly...even if we consider the minimum of criminal sex allegations against him, why are people still buying his music?

Mark Riley: The Intersection of Politics and Culture

Dig deeper into the news and find your truth on issues that matter to you with veteran broadcaster, Mark Riley. Break apart the fake news and question the truth behind this week's trending topics. This episode looks at America's obsession with the private lives of billionaires; the true meaning and fears of Socialism; and end of life issues with B.Smith.

A Tale of Three Candidates: Are Harris, Booker and Buttigeig reaching too high? Taboos behind Interracial marriage, bachelorhood or same-sex unions still exist; could the 2020 bring change? We also take a look at the history of Blackface in the US...

Mark Riley The Intersection of Politics and Culture Episode 7

Critical analysis of The National Emergency by Donald Trump; Have Trump and McConnell cheapened the presidency of the United States? And why is Immigration such a hot topic with the likes of Stephen Miller seeking to curb even legal immigration. My question is to the stream of Democrats running for the 2020 election: it's not enough to just criticize; what is your immigration strategy?

Democrats, don't get too comfortable! The shutdown may be over but the President hates bad publicity -- especially when it reaches his base -- and Trump and McConnell are not honest negotiators. Could Republicans run someone up against Trump for 2020?

Things are getting deep with the shutdown, the Trump-Russia investigation, and The Wall. Americans are encouraged to believe only the media that reinforces their view of the world. It’s not new, but it ought to change. Modern [reality format] media is about attracting attention. There are good journalists around, but the important question for media is exactly how much should this president and his incessant tweets, be covered? In this episode we'll take a look at who is running for the Democratic Party nomination for president in 2020? Depends on who you ask. Elizabeth Warren and Kirsten Gillibrand have already announced. So have a host of others most Americans have never heard of. Off to the side are a number of prominent Dems who have yet to formally announce, from Corey Booker to Kamala Harris to Mike Bloomberg to Joe Biden to Bernie Sanders. Who will prevail? Unlike four years ago, there’s no anointed candidate, so presumably the field is wide open. As a small 'd' democrat, I always believe the more the merrier. In 2016, there were 16 GOP candidates, and look what they [we] wound up with. The Democratic Party can and must do better, no matter who decides to run. I would urge people not to pay too much attention to the horse race aspect of media coverage. There will be polls, and more polls. Take most of them with a grain of salt as well. Ask yourself, what are my interests, my issues, my concerns? Make your choice on who to support based not on hype, but on your assessment of who best speaks to you.

Legal lynching of jogging while Black in Brunswick, Georgia. Rest in Power  Mr. Ahmaud Arbery.  The definition of presidential madness and the loss of our arts and culture post COVID-19.

Why are thousands of Americans risking their lives and the lives of others to protest lockdown? Dr.Phil. Dr. Oz. our clinical leaders? Today's youth and racism on TikTok.

Mark Riley The Intersection of Politics and Culture S2 Ep 6

A good leader leads by example; why should you wear mask if your leader refuses to wear one? Would FDR, Churchill or Mandela have stood for less than acceptable production of tests or ventilators? How is the social media rumor mill affecting our well being? Once again, fed by the leader who once said the virus was a plot hatched by the Democratic Party.

It's down to Bernie or Biden, but which one will reach the required number of Delegates and who will they choose for running mate? It's not just the presidency that's at stake, there's the Supreme Court, Congress and the passing of all kinds of laws. Trump is lurking in the background, guns fully loaded.

Bernie Sanders is building momentum among the Democratic candidates, but will Bloomberg topple his lead? Trump defies every possible code of morality yet finds only unconditional love from the '63m' base. Can he really walk on water to take four more years?

Dysfunctional Democrats and Trump is the big winner of the Iowa Caucus; KPI dehumanization; Black media dissed on the Red Carpet; and Kobe Bryant's legacy in context.

Impeachment or a second term for Trump? Democratic debate candidates dropping out and what about young voters? Who will they choose?

Impeachment...Why bother if its outcome is prearranged?Whatever comes out of this presidential impeachment, it will not move the needle on Trump's supporting base. But is the size of his base fabricated?

Why, why, why does Trump dominate the news? This week spans Iran and our dependency on oil; Fossil Fuels; double standards of Immigration; and the alleged rape of a newspaper columnist. Despite calling the Media traitors, seems they're the ones to profit from the constant news cycles churned by the 45th POTUS.

When will the American love affair with firearms finally be challenged? Maybe not in my lifetime. Where's the diversity in the Democratic Party frontrunners? Is it Right to Life or Hypocrisy?

Mark Riley: The Intersection of Politics of Culture Ep 14

Barbaric restrictions and an overturn of Roe V. Wade proposed in severals states. Over which rights of a man's body do women have a say? Trump's Immigration plan would have denied entry to his own family and that of Pence, Kushner, Miller and the Knavs; and how far is to far in the Jeremy Kyle-style talk shows?

Ep 13 Intersection of Politics and Culture

Impeach Trump? Would it be a pointless exercise with unintended consequences? Free public college tuition from presidential candidate Elizabeth Warren; and is 90-Day Fiancé, a slight on real immigrants battling the hostile system.

Is Julian Assange a crusading journalist or a traitor and is he unstoppable? More than 300 jurisdictions across the U.S. are considered immigration sanctuaries - but where will undocumented immigrants go once Trump releases them there? Measles - will this airborne disease epidemic affect your life?

Budget proposals cut food stamps, conservation and public housing repairs - is that who America is? Trumps strategy is insanity masquerading as foreign policy, and the upcoming election focus for The Democratic Party seems to be in all the wrong places.

© 2020 OwlTail All rights reserved. OwlTail only owns the podcast episode rankings. Copyright of underlying podcast content is owned by the publisher, not OwlTail. Audio is streamed directly from Mark Riley servers. Downloads goes directly to publisher.