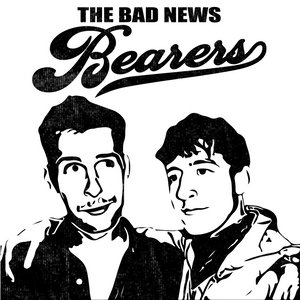 Longtime friends Dave Del Greco and Travis Rae air their grievances, from little gripes to the depths of despair, in this (comedy, they hope) complaining podcast. They tackle everything from daily minutia to movies &amp; TV; if it bothers them, it's not off limits. At the end of the day, they're just two dudes who feel that if you can't express your distastes, then you'll never know what it is you actually like! (and they despise the expression "at the end of the day")

We're coming in hot with eggplant-- the emoji, the food, and the dong-- as well as a sordid saga Dave would soon like to forget. Travis reads the riot act to windshield wipers for their streakiness before Dave forces him to determine which unsetting exotic international cuisines he would or would not try. Balut, anyone?

In this episode, the boys kneel at the altar of Zankou Chicken, delve into the depths of the despair that is traffic in Los Angeles, while Travis expresses sincere skepticism about whether Lady Gaga’s vocal style will play on the big screen.  After explaining why crying over spilt milk is completely justified outrage, Dave rails on the children's animated film THE BOSS BABY, which, by fault of fatherhood, he has been subjected to far too often.

Lots of automotive gripes to be had in this bad boy, from car chases to an ill-conceived vanity plate. The Irish and Scottish peoples are unabashedly conflated, while Dave goes down a rabbit hole about an old roommate he and Travis once had. The filmography of director Paul Thomas Anderson is thoroughly unpacked and ranked. Oh, and pedophilia gets a wink too.

Sink pissing, thin ass napkins, overloaded sandwiches, self-important parents, and dickheaded air travelers-- it's all here! Plus the guys take aim at Sofia Coppola's 2010 circle jerk Somewhere, which, if you haven't seen it, you shouldn't.

Statue people, keeping your real estate dealings to yourself, and whether or not technology is ruining baseball (and by extension, our lives) round out the topics of the day. Dave reveals his unpopular feelings about surrealist filmmaker David Lynch, Travis rails on Jay Leno's Fallon hackery, and the guys revisit INDIANA JONES AND THE KINGDOM OF THE CRYSTAL SKULL one decade later to see how time has treated it.

We're coming in hot with a Bloody Mary in the cupholder, but with some special ice cubes that will either cool you down or haunt your dreams. After a grimy tale from the laundromat, gym gripes abound! Travis has finally seen A STAR IS BORN '18 and boy, does he have thoughts, while Dave discusses the Mel Gibson, Vince Vaughn-starrer DRAGGED ACROSS CONCRETE. Bow to a couple o' Lion Kings, ya baboons!

We got your shower products, we got your nasal manscaping, we got your golf! Dave shamefully cops to watching LOQUEESHA and Travis does a deep dive into the Instagram inspirational quote racket, after which the new comedy WINE COUNTRY, now streaming on Netflix, is sommelier'd.

Trav &amp; Dave kick things off with a spirited condemnation of the many LA residents who've yet to crack the proper etiquette in navigating parking lot pay stations, then stumble deep into a rabbit hole drawing distinctions between genres of gum. After Dave vigorously defends his unpopular opinion that Ridley Scott is perhaps slightly overrated, the guys thoroughly dissect the many WTF leaps permeating the recent Oscars darling, Three Billboards.

There are more complaints to be had, as Travis illustrates the all-encompassing meh-ness that is the second installment of the Guardians franchise to Dave, who's only seen the first one. Then they veer off into discussing Justice League, and Dave stumps about why it was epically disappointing for anyone who grew up reading Superman comics.

Ariana Grande, Arrowhead Water's Instagram following, and becoming ill just in time for the weekend are amongst the topics of the day. For the main segment, Jonah Hill's directorial debut MID90s is broken down. It's a warm day (in Fahrenheit) for some bad news!

Episode 12: THE THEORY OF EVERYTHING

Travis &amp; Dave both confess something they've never told anyone before, while firing across the bow at specialized diets and those who fail to grasp group text etiquette. After Dave touches upon how even one of the better aspects of Hollywood's creative vetting system is broken, the guys take aim the overrated 2014 Stephen Hawking biopic The Theory of Everything. 100% not smeh, guaranteed!

Episode 18: Critical thinking: not for everyone.

Shots are fired at the Grammys, BBQ elitism, airport workers' priorities, and pseudoscience dabblers everywhere. BOHEMIAN RHAPSODY is dissected at length, and while it's not a bad movie, the guys make a strong case why you shouldn't aggressively seek it out.

The Super Bowl is lamented, those who enjoy dive bar billiards are shat upon, and an unofficial theme song is bestowed upon Netflix's BIRD BOX, after which the guys kick the universally-panned movie GOTTI while it's down.

Travis bids an unfond farewell to THE BIG BANG THEORY, Dave spoils AVENGERS: ENDGAME and a trip to the Trailer Park is taken for a special installment that's racially-cringeworthy. Come for that nonsense, stay for Dave's first ever tweet! In the main segment, the 2018 comedy TAG is dissected, and everything wrong with it is brought to light.

Punctuated by spider webs, conservatives with stupid names, and a disagreement over Sebastian Maniscalco, on today's episode the guys discuss Netflix's MURDER MYSTERY starring Adam Sandler and Jennifer Aniston. That, and we are no longer accepting text messages from car salesmen.

Episode 24: The Shallows of Despair

Travis kicks things off with an Ace Ventura throwback ditty, and Dave dives into the old photo archive. Milano cookies, The Matrix on the john, and Lena Dunham's existence are among the episode's discussed/lamented topics. The new Motley Crue biopic THE DIRT, now streaming on Netflix, is put through the ringer. Stroke it, ya blimps!

The guys hit the ground running with Dave recounting a moment of self-consciousness in the gym... with an unexpected twist. After dragging Brian Setzer's rockabilly band "The Stray Cats" and fuming over the weight distribution in silverware, the guys go to town on the so-called classic The Big Chill, and by extension, the entire Baby Boomer generation. No punches are pulled, so hold on tight!

Popular breakfast items get the FMK treatment, Beyonce is called out for her antics, and time keeps on slipping into the future, but no one here is named Steve Miller. The most recent effort of filmmaking maestros Joel &amp; Ethan Coen, Netflix's THE BALLAD OF BUSTER SCRUGGS, is reviewed, after which the Brothers' entire impressive filmography is ranked.

Unnecessary beeping fans, kidney donation hypotheticals, toy packaging, and questionable name choices round out the topics of discussion. After explaining why most of this fall's "Must See" Movies are anything but, Travis discusses IDEAL HOME, starring Steve Coogan and Paul Rudd.

Travis takes the art of ventriloquism to task, Dave confesses something truly horrific, then the boys get the meat hooks out for the hipster-sheik indie darling VOX LUX. Lots of complaints to go around, but Portman gets the brunt of it.