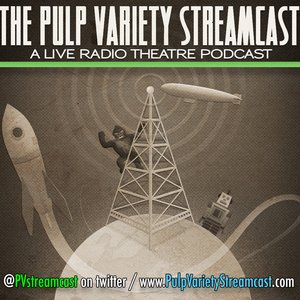 The Pulp Variety Streamcast is an original Radio Theatre showcase, recorded live in front of a studio audience then released as an Audio Podcast. Old Time Radio, New Original Shows! Come experience some wild cross genre comedy sitcoms they way you never have before!Featuring:DB Cooper in the 38th and 1/3rd Century (by David Guzman) In 1971, D.B. Cooper hijacked a Boeing 727 and jumped out with $200,000 into the night over Washington state. He was never heard from again. What no one knew was that Cooper passed though a wormhole sending him bouncing through time, landing in the 38th and 1/3rd century!Castle Monsterstein (By David Haan) If you like ghost tours and family dysfunction, then come take a guided audio excursion to Castle Monsterstein, an open to the public Museum of the Family Monsterstein, restored to showcase and educate on the family’s rich history of Monster Creation and Odd Ball Scientific Experimentations. But make sure not to disturb Lumidia Monsterstein, heir to the Monsterstein estate, as she toils in her family laboratory trying to escape the shadow of her family legacy. Also there’s a gift shop.The New Olympians (By Gregory Gallagher and Peter Zimmermann) Sam and Mary, recently engaged danger chroniclers chronicle their dangerous globetrotting exploits in this nostalgic adventure series where they encounter thrilling mysteries with the help of their snooty assistant, Charles. Join us as they Encounter Sentient Reptiliods, Psychic Yetis and other never before seen wonders and... well dangers.Downgrade Alley (By Jaime Morris) It was the year 2450 and the entire galaxy wavered on the brink of war. That’s right. The Entire Effing GALAXY! But on a little planet called Earth, in a town called South Rom- a fine little hamlet just south of North Rom – The Robot Family of 10001101 and their fateful human servants lived in peace, just as they had for hundreds of years, sheltered from the rest of the harsh galaxy. A story of Lovers torn by flesh and Metal, divided but not just their class, but also their make and Model. Welcome to Downgrade Alley. 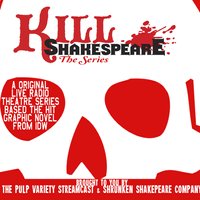 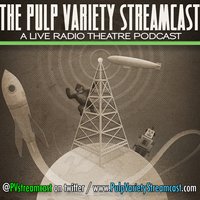 @pvstreamcast Presents: Castle Monsterstein Ep 3 "Double, Double Monsters &amp; Trouble" Written by David Haan In this episode, Ludmilla and Krakenhaus must face the worst monster to ever terrorize the halls of Castle Monsterstein, Ludmilla's sister. Make sure to follow The Pulp Variety Streamcast @PVStreamcast on twitter and visit our website www.PulpVarietyStreamcast.com 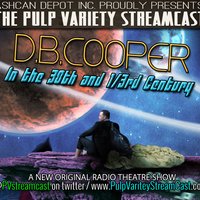 @pvstreamcast Presents: Castle Monsterstein Ep 2 "The Rites of Spring Cleaning" Written by David Haan In this episode, Ludmilla and Krakenhaus take on the almost impossible act of cleaning the castle, with the help of a foreign moving company and an unpacked ghost. Make sure to follow The Pulp Variety Streamcast @PVStreamcast on twitter and visit our website www.PulpVarietyStreamcast.com 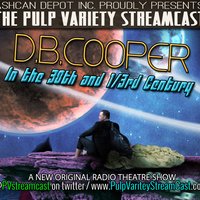 @pvstreamcast Presents: DB Cooper in the 38th and 1/3rd Century Ep 4 "I Me Mind" Written by David Guzman In this episode, DB and Demoulin recover from surgery as Agent Simms tracks them down the Avalan Desert Hospital, could this be the end of DB and Demoulin find out in this thrilling episode "I Me Mind" Make sure to follow The Pulp Variety Streamcast @PVStreamcast on twitter and visit our website www.PulpVarietyStreamcast.com