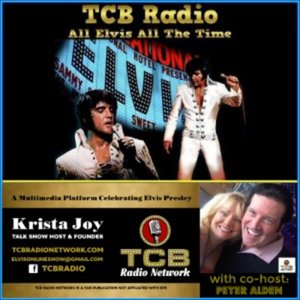 Hello all you Elvis fans! Welcome to the TCB Radio Network podcast celebrating the life and memory of Elvis Presley with a mission to share his legacy with the world. Here you will find interviews with authors, Elvis Fan Club presidents, artists, musicians, and OF COURSE close personal FRIENDS of Elvis Presley who knew the man himself! Get ready for some Elvis content and news you can use! We are an unofficial fan podcast, not associated with Elvis Presley Enterprises

Show # 40: Interview with Ray Walker of the Jordanaires

Show # 40: Interview with Ray Walker of the Jordanaires

As we begin Season 2 of TCB Radio Network we have brought back audience favorite, Elvis's former girlfriend,  Mindi Miller!  Mindi is an accomplished actress, model, and stuntwoman, having appeared on Television shows such as Knight Rider, Quark,  Scarecrow &amp; Mrs. King and V.  She has also appeared in numerous films, including Sacred Ground, Body Double, Amazons, and Caged Fury.  She was also an important part of Elvis Presley's life, as she dated him for a while in the 1970's!  In the first part of our interview Mindi goes more in depth into how she met Elvis, and the important roles they played in each others lives.

As we continue our interview with former Elvis girlfriend, Mindi Miller, she takes us into his spiritual side.  Elvis was an incredibly spiritual man, as most people know.  His generosity, and love of Gospel music was well known, however, only a few special people were privileged to study with him, and learn some of his deepest feelings about God, family, thoughts on the universe and so much more.  Mindi was one of those special people in his life, and in this part of our interview she opens the door into what it was like to spend time with the 'real' Elvis Presley,  It's a fascinating discussion, and Mindi was so fortunate to be included in this, most spiritual part of his life!

Part 1 of our fantastic interview with multi-talented Country music star/Singing voice of Elvis, a gifted painter, Ronnie McDowell. A wonderfully funny and open gentleman. We know you'll love this one!!Following the death of Elvis Presley in 1977, Ronnie McDowell came out of nowhere to dazzle the world with his heartfelt and self-penned tribute song “The King Is Gone” on the independent Scorpion label. The record took off immediately, gaining airplay on country and pop stations across the country and around the world. To date, “The King Is Gone” has sold more than 5 Million copies.Ronnie McDowell has an amazing string of hit songs that he has amassed over the years, but it is his riveting stage presence and genuine warmth that fills the seats again and again. Like all great entertainers, Ronnie McDowell has a personality that remains luminous long after the lights go dim. These qualities have inspired a nationwide network of fan-clubs with thousands of members, each one a devoted promoter of everything McDowell does.While Elvis Presley has played a big part in Ronnie McDowell’s musical career over the years, Ronnie continues to entertain audiences with his own blend of romantic intimacy and country excitement! He looks great, he sounds great, and judging from the longtime adoration of his fans, he seems to grow better with each passing year!

Larry Geller has been the stylist for many celebrities over the years including Roy Orbison and Peter Sellers, and of course spent many years working with Elvis Presley.  In this episode we speak with Larry and his wife Shira about their new hair care line called Wisdome Organics!From his website www.wisdomeorganics.comWisdome Organics is committed to crafting formulations of exceptional quality, the most advanced of any natural or organic professional line. Utilizing the synergy of certified organic extracts, botanicals and beneficial color-safe ingredients, our haircare line offers phenomenal results you can see and feel. Our products not only offer exceptional performance for your hair, but they are kind to the environment, with recyclable bottles and tubes.  Most are vegan, and absolutely no animal testing ever. Our products are sulfate free and paraben free, as well as free from glutens, harmful chemicals and environmental pollutants. Everyone’s hair has the potential to become healthier, fuller, and more lush. Working with nature and science, as well as spirit, we make this change possible, offering you health, confidence, and… amazing hair!

In this episode with speak with author and columnist, Richard Zoglin about his new book "Elvis In Vegas", which explores the history of Elvis Presley's time in Las Vegas!  How he ultimately changed the direction Vegas was going, and how Vegas helped him rejuvenate his career

Elvis Aaron Presley was born in Tupelo, Mississippi, on January 8, 1935, to Vernon and Gladys Presley. Born in a two-room house built by his father, grandfather and uncle, Elvis was one of twin brothers born to the Presleys. His brother, Jessie Garon, was stillborn. The city of Tupelo bought the home and surrounding property in 1957. The property stands in its original location and has been restored to its original condition, decorated with period furniture, and is open to the public for tour. We are honored today to have a special guest on the line for you to help us learn all about it .. he is the the executive director of the Elvis Presley Memorial Foundation! Dick GuytonAlso, we present a special short presentation for Wisdome Organics with Larry and Shira Geller!

In this episode we talk with Mike Miller, co-author of the book "The Elvis Experience". This book contains the memories and stories of Dave Hebler, Elvis's former bodyguard and karate instructor.

In the second half of our interview with Bill Morris, we delve deeper into his relationship with Elvis Presley, and his thoughts about life and politics.

In this episode we have the opportunity to talk with former Sheriff, and Mayor of Memphis, Mr. Bill Morris.  As Sheriff he was instrumental in the capture of James Earle Ray, the man who shot Dr. Martin Luther King.  He was also a great friend of Elvis Presley.  In the first part of our interview he talks about his history, and how he met Elvis.

In this episode (part 1 of 2) we speak with Kim Davis, widow of Richard Davis, about her husband who worked for Elvis in various capacities, including bodyguard and sometime movie stand-in.

In this episode we have the opportunity to speak with Johnathan Len, an entertainer who not only performs a song with a powerful and expressive vocal but captures a crowd through audience participation.  His new single "You Will Never Leave My Mind" (written by Ronnie McDowell) is now available to purchase through online outlets. Ronnie McDowell wrote this song as  a special tribute to his dear friend - who was also very close to Elvis - Mr. George Klein. You’ll hear on this interview how the Elvis community is really embracing Johnathan - and we think you will too!  Find out more about this special song and Johnathan’s love of Elvis!  Listen all the way through to hear the song itself!**TCB Radio Network does not own the song "You Will Never Leave My Mind" nor is any ownership implied!

Part two of the interview with Victoria Paige Meyerlink who co-starred with Elvis Presley in Speedway.

In this episode we speak with Kim Davis, widow of Richard Davis, about her husband who worked for Elvis in various capacities, including bodyguard and sometime movie stand-in. Part Two

© 2020 OwlTail All rights reserved. OwlTail only owns the podcast episode rankings. Copyright of underlying podcast content is owned by the publisher, not OwlTail. Audio is streamed directly from kristajoy servers. Downloads goes directly to publisher.