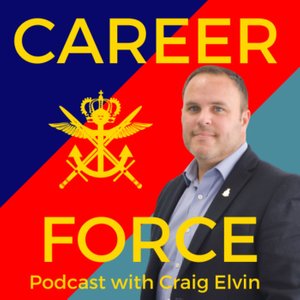 Are you serving or ex-military? Are you looking for a job right now? Are you in a hiring process or considering a career change? If so, then get downloading. I’m Craig Elvin, I’m an ex-soldier and currently the director of an Executive Search business. I want to share with you the insights, advice and skills that I’ve learnt over the last 15 years. Career Force is for serving or ex-military personnel and offers up to date, relevant career coaching to help you secure the career you deserve. Each week I’ll bring you a mixture of veterans that have trodden the path you are on, who will share their insights and tips for a successful career transition as well as asking industry leaders and service providers to share their insights. 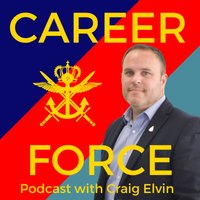 Exiting with class with Roderic Yapp

This week I interviewed Roderic Yapp. An ex-Royal Marines Officer who now runs his own business Leadership Forces who gave some valuable insights for service leavers. We talked about ensuring that you exit the military with class, what it is that civilian employers will see in you as someone from a military background and, I think, most importantly about self-analysis and how it can lead to a rewarding and fulfilling career. He referenced some fantastic and very useful content that is listed below. Roderic Yapp LinkedIn Profile Leadership Forces websiteJunior Officers Resettlement Guide The Officers Association What Colour is your Parachute by Richard Bolles

This week I interviewed Andy Johnson –  An ex-Soldier, Musician, and Army Ladies Rugby coach that pursued his interests and went into mortgage broking as a career. After 18 months, frustrated by civilian leadership, he set up his own successful brokerage that employees several ex-military personnel. As well as giving a warts and all view of his career transition and details about how to move into the mortgage broking industry Andy provided some fantastic insights about the “Help to buy” scheme, how and where to buy a property, and other finance orientated advice that may well help you in your career transition. Andy's LInkedIn Profile Yes Mortgage Services

This week I interviewed Billy White. Billy finished his career after 23 ½ years and emigrated to the middle east with his family. A decision he made with four years left in green kit. He spoke about how he balanced his job in the Army with gearing up for his transition, being proactive, visiting industry and something that is fast becoming a common theme on the podcast, networking. Billy's LinkedIn profile.

Two Craigs for the price of one.

This week I spoke to Craig Melvin, Regional Recruitment Partner for Travis Perkins and their lead for the work they do surrounding the forces covenant. As someone who has transitioned and is now in a recruiting role, he had some excellent insights and advice for service leavers centred around learning how to sell your experience to employers and the importance of networking and gaining experience. He also talked about the mentoring and coaching he does with Recruit for Spouses and Project Recce. Links from the show. Craig's LinkedIn Profile Travis Perkins plc | CareersRecruit for Spouses. Project RecceForces Families Jobs

The right mindset with Mark Budd

In this weeks episode, I interviewed Marc Budd. An ex Cavalry Warrant officer that has moved into an exciting career in management consultancy. I’ve known Mark since we served together and what has always struck me about Marks career transition is his dogged determination, his tenacity to carve the career he wanted not what he was told he should do and the mindset he took into it. Two years down the line I think he’ started to really find his feet and flourish in his civilian career and he’s used the military to help him do that in an unexpected way. You can connect with Mark on LinkedIn Here

In this weeks episode I spoke with Andy Brown, he signed up for a short term, three-year commission in the Royal Artillery and before he knew it had served for twenty-three years and reached the rank of Lt Colonel.  Andy spoke candidly about his journey of discovery after leaving the Army and how those who are still serving can and should start to gather evidence about their experience and capabilities that will help them secure a job outside of the military.If anyone would like to reach out to Andy you can connect with him on his LinkedIn Profile

With Tony Life. From Bootneck to Businessman

This week I interviewed Tony Life An Ex-Royal Marine who has successfully transitioned into a commercial position where he works with overseas businesses wanting to set up in the UK and Europe as well as small start-up businesses looking to grow. We discussed the qualities and values that ex-military people can bring to civilian firms and about broadening your horizons so that you can fully understand the world of work and make an informed decision about your next career move.

In this episode, I‘m joined by Johanna Hooper. Since leaving the Navy in 2014 Johanna has worked for PA Consulting and Korn Kerry and Last year she set up her own business, Limitless Peak performance.  She now coach’s industry leaders and their businesses in various areas in including performance improvement, mental wellbeing, and resilience.During this episode, we talked about the importance of meeting the challenge of transitioning to a civilian career head-on, giving yourself plenty of time and planning for the worst. Johanna’s LinkedIn Profilehttp://www.limitlesspeakperformance.co.uk

© 2020 OwlTail All rights reserved. OwlTail only owns the podcast episode rankings. Copyright of underlying podcast content is owned by the publisher, not OwlTail. Audio is streamed directly from Craig Elvin servers. Downloads goes directly to publisher.