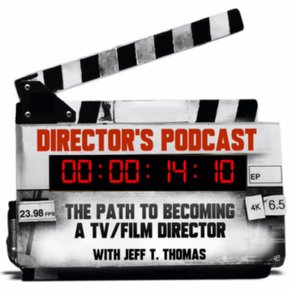 Created by director Jeff T. Thomas, the Director's Podcast is a weekly 13-episode limited series, featuring some of the most talented TV and film directors in the industry. Part 1 features the story of how each director broke into the business and part 2 is a director to director discussion about their process as well as highlighting some of the more defining moments their career. 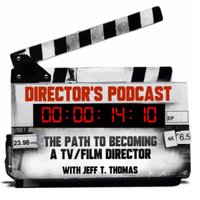 Episode 13. The Takeaway - Final Episode with Jeff T. Thomas. Thomas talks about what he’s learnt from this season after delving into the stories and the work process of his guests.  He breaks down some of the most poignant moments and observations, as well as sharing his own techniques for taking a project from script to screen.

Episode 12. Scott Mann Part 2.  Mann discusses the ins and outs of making independent action movies and how being efficient when filming certain scenes can help other unrelated scenes. Why his dreams no longer include making big studio movies like “Star Wars” and how he convinced Robert De Niro to do his movie after De Niro told him that the role wasn’t something that he was interested in. Recorded mid 2020.

Episode 11. Scott Mann Part 1. From making short films at age ten with his brothers as a form of entertainment in northern England to hugging Robert De Niro in New York City. Mann discusses how he overcame an inordinate amount of obstacles while making his first independent movie. He shares his thoughts on the sacrifices he’s made while making movies, how visiting the Cannes film festival changed his pursuit of the type of movie he wanted to make and how to pick yourself up again after being let down by so many promises and lies.

Episode 10. Solvan ‘Slick’ Naim Part 2. Naim discusses how flexing his visual storytelling muscles in music videos helped him create an almost dialogue free episode of his hit Emmy-nominated TV show ‘It’s Bruno’. He shares his thoughts on how storyboarding big action sequences can save time while filming and what he wishes he did differently on his first movie ‘Full Circle’.

Episode 9. Solvan “Slick” Naim Part 1.  From stepping onto his first film set as a 19-year-old rapper to being nominated for an Emmy for his Netflix show ‘It’s Bruno’, Naim discusses how he wrote, produced, directed, acted in, edited and even location managed his first movie which he made for $20,000 and ended up selling and being awarded a $1 million advertising budget. He discusses the difficulties of getting a Hollywood agent and how he went from working on the lowest budget shoot in NYC to the highest in just over a year.

Episode 8. Roger Donaldson. Part 2.  Donaldson discusses working with Tom Cruise and the ‘gunslinger’ technique that Donaldson discovered when he came on board to direct the the movie Cocktail. He shares his thoughts on his approach to directing actors such Anthony Hopkins, Sissy Spacek and Daniel Day-Lewis as well as sharing some of the more defining moments in his career.

Episode 7. From discovering a love of film through photography while living in Australia and New Zealand to directing two number one US box office hits. Donaldson got a big break with legendary producer Dino De Laurentiis, taking over the directing duties on the classic movie The Bounty. He then went on to become an A-List director, making movies such as Cocktail with Tom Cruise, The Recruit with Al Pacino and Colin Farrell, Thirteen Days and No Way Out with Kevin Costner.

Episode 6.  Kassell discusses her approach to filmmaking. She shares her thoughts on her experiences on Westworld and the challenge of recreating the 1921 Tulsa race massacre for HBO’s Watchmen.

Episode 5. From discovering filmmaking during her first year at college to winning numerous prestigious awards for her first movie The Woodsman, Kassell has continued to direct movies whilst also dominating the TV industry directing shows such as The Leftovers, Westworld and the pilot for Watchmen. We hear of some of the difficulties along her journey and how she overcame them.

Episode 4.  Barclay discusses his approach to filmmaking and the importance of shot-listing every scene. He shares his thoughts on how you need to be a different director for every actor, the difference between Steven Spielberg and David Fincher’s styles and the importance of knowing what you don’t know and how to ask for help when it is needed. Barclay gives many more insights from his nearly 200 episodes of television including his work as the President of the Directors Guild of America.