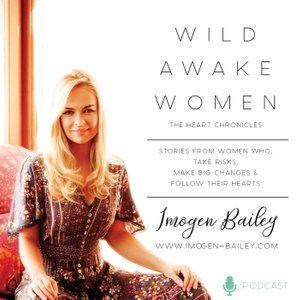 Wild Awake Women ‘The Heart Chronicles of Wild Awake Women’, host Imogen Bailey explores the journeys of women who have taken risks, made changes and are following their hearts. You will find insightful tips and wise woman life hacks. You will enjoy animated life stories and find out just how the women Imogen interviews decided on and fiercely followed their heart paths. You will be elevated, inspired and held in a sisterly embrace. Dedicated to the passing down of women’s stories, just as women have done since the dawn of time, we sit in circle and we listen to the voices of our sisters. Deep down we are all wild awake women. Host Imogen Bailey is a women’s circle educator, a birth and end of life doula, an actor and television personality. Imogen has a deep passion for the stories of women and their growth. Join her for a fortnightly story sharing session. 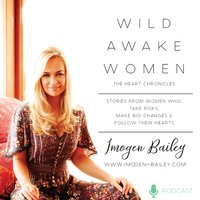 WAW 4: How to overcome adversity, joyfully

In this episode Imogen speaks with Amy Molloy who is a journalist, the editor of  The Collective Hub and Hay House author who produces uplifting content for the biggest names in global publishing. Her first Hay House book, The World is a Nice Place: How to Overcome Adversity Joyfully was the product of ten years’ worth of research, interviewing ‘empowered survivors’ about their coping mechanisms for overcoming the worst experiences of your life whilst still hoping for the best. It sold-out on Booktopia—Australia’s largest book retailer—within six weeks of its publication date. As a ghost-writer, Amy has authored eight additional books, three of which topped the Amazon charts, and specialises in ‘storytelling for healing’. Currently the editor of Collective Hub, a video of her ‘joyful birth’ went viral with 80,000 hits in 48 hours. Amy is inspiring, grounded and deeply soulful, her story and the stories she writes will move you and you may just be inspired to pick up your pen and tell your story. Amy also teaches writing workshops for more information on Amy, her book and her classes: Find Amy: www.amymolloy.com Instagram: @amy_molloy Find Imogen: www.imogen-bailey.com Facebook group: WildAwakeWomen The post WAW 4: How to overcome adversity, joyfully appeared first on The Wellness Couch.

WAW 3: A woman’s mission for freedom

In this episode Imogen speaks with the magnificent Sally Irwin who is the founder of The Freedom Hub. The Freedom Hub is rebuilding the lives of people who have experienced human trafficking and slavery within Australian borders. Sisters you will be inspired by Sally! Moving to Germany in 2008 when her husband took up a Diplomatic post in Berlin, Sally Irwin was confronted with the issue of human trafficking Eastern Europe, and established a charity in Berlin to fund organisations that supported the victims. She became very active in a centre supporting women trafficked into prostitution, and was personally involved in helping a number of these women return to their country and begin a new life. After four years working on the ground, face to face with trauma victims of modern slavery Sally returned to Sydney mid 2012, keen to apply her experience here in Australia. To learn more about the issue in Australia she spent 18months as a volunteer in the Salvation Army’s Trafficking and Slavery Safe House. During this time, she found the gap in Australia’s response to trafficking of persons, resulting in the creation of the Freedom Hub. In March 2014 Sally founded The Freedom Hub Survivor School, that rebuild the lives of victims, provides long term support and a peer support program. Their trauma informed classes train, equip and provides work experience to survivors of modern slavery in Australia. How to get in touch and help: Website: www.thefreedomhub.org Donations: www.thefreedomhub.org/donate Enquiries: info@thefreedomhub.org Events@thefreedomhub.org Volunteer@thefreedomhub.org Social media: @freedomhuborg To get involved and receive a planning or media kit for Fivers for Survivors Day (Oct 12th) contact: fivers4survivors@thefreedomhub.org Find Imogen at : www. imogen-bailey.com  The post WAW 3: A woman’s mission for freedom appeared first on The Wellness Couch.

WAW 2: Sex education and self – esteem in teens

In this episode we chat with Jayde Robinson-Clancy Founder of the Blossom Guide which is a young women’s empowerment program delivered through a series of 5 workshops for women aged 13-24. TBG aims to develop confidence and awareness in young women when making choices around their sexuality by addressing the ‘hyper sexualisation’ of society and the impact this is having on young women’s self-esteem and self-worth. TBG content focuses on ‘Social Sexuality’, which means the external social factors that affect young women’s behaviours and attitudes towards their identity and sexuality, and covers a variety of topics relevant to young women’s daily lives. Jayde Robinson-Clancy has a background working in youth mentoring, youth development, family and domestic violence, mental health and wellbeing. Jayde has worked with various women’s committees including The United Nations Association of Western Australia’s Women’s Committee (UNAAWA), and tirelessly contributes to women’s rights and wellbeing causes. Jayde has a Bachelor of Social Science and has completed postgraduate studies in Community Development. Jayde is passionate about helping young women discover what factors may be impacting them and how they can make positive changes through their own agency and empowerment. Find The Blossom Guide at www.theblossomguide.com  Find Imogen at https://imogen-bailey.com The post WAW 2: Sex education and self – esteem in teens appeared first on The Wellness Couch.

Wild Awake Women Episode 1 ~ Raise Your Vibration Alex Tripod joins Imogen for the first episode of Wild Awake Women. International Speaker &amp; #1 Best Selling Author, Alex Tripod has been obsessed with manifesting, law of attraction and vibration her entire life. Alex is a big believer that when you finally allow yourself to immerse yourself in the very thing you’ve been secretly obsessed with your whole life, and thenlife explodes. And her obsession is to raise the vibration of humanity, free people of the programming society has lead us to believe in, and give people the tools they need in order to become conscious creators of their reality and harness the invisible forces at play! Alex cuts through the ‘fluff’ and gets REAL as she gives practical tools on manifestation in a very matter of fact and scientific level. Running the infamous 21 Day Manifesting Accelerated Challenge and running her workshop ‘Raise Your Vibration’ around the globe, Alex has one mission. And that is to raise the vibration of humanity on a global scale all whilst giving people powerful tools to quantum leap into a reality they desire. Hear her story, get some incredible manifesting tips and have your vibration raised. www.imogen-bailey.com www.alextripod.com The post WAW 1: Raise your Vibration appeared first on The Wellness Couch.

© 2020 OwlTail All rights reserved. OwlTail only owns the podcast episode rankings. Copyright of underlying podcast content is owned by the publisher, not OwlTail. Audio is streamed directly from The Wellness Couch servers. Downloads goes directly to publisher.