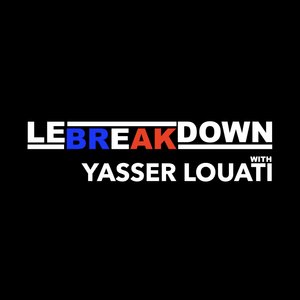 Deciphering the most contested topics of our times straight from the South Side Banlieue of Paris. Join French human rights advocate Yasser Louati for his uncompromising takedowns of the headlines, what's behind them and who's on the other side. 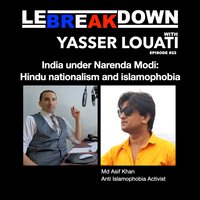 Shedding light on how nazi ideology has inspired the BJP in power and how the collapse of Indian democracy did not happen overnight. Md Asif Khan , an Anti Islamophobia Activist came on the show to describe the ongoing persecution of religious minorities in India especially Muslims, their lynchings, the violence of "mob cows", the poisonous conspiracy theories like "Muslim coronajihad" and the responsibility of Indian media.  This podcast is brought to you by CJL, a human rights and civil liberties organization. We are independant and receive no state subsidies to remain so. If you feel this podcast deserves your support, please make a donation from 1€ without commitment. --- Send in a voice message: https://anchor.fm/lebreakdown/message 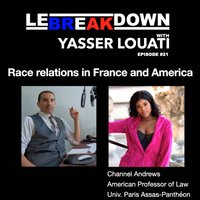 RACE RELATIONS IN FRANCE AND AMERICA

“This anti separatism bill reminds me of the Muslim ban under Trump” Channel Andrews, Professor of Law at the University of Pariss Assas Channel Andrews is an American attorney based in Paris, France, where she teaches law at Université Panthéon-Assas (Paris II). Prior to moving to France, she served as Assistant Counsel in the Governor’s Office of General Counsel in Pennsylvania. Her legal expertise includes Administrative Law, Comparative International Law, and Constitutional Law. In this conversation, Channel Andrews compared ongoing mobilisations in both France and the US against shrinking space and how governments, especially in France seem unable to hear demands for equality and justice. This prodcast is a product of the Committee for Justice &amp; Liberties, we are and remain totally independent thanks to our donors. How about being one of them from 1€ without commitment! www.cjl.ong/en/donation --- Send in a voice message: https://anchor.fm/lebreakdown/message 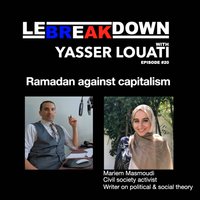 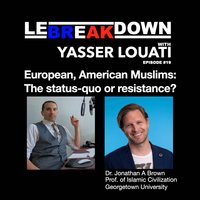 From 9/11 to the Paris Attacks in 2015, from the Patriot Act to the  state of emergency in France and in light Macron's racist policies, a  transatlantic look at Muslims in the West. This podcast is independent thanks to our donors, please be one of them and help us sustain this project, from 1€ without commitment: www.cjl.ong/en/donation Jonathan Brown is the Alwaleed bin Talal Chair of Islamic Civilization  in the School of Foreign Service at Georgetown University. He received  his BA in History from Georgetown University in 2000 and his doctorate  in Near Eastern Languages and Civilizations from the University of  Chicago in 2006. Dr. Brown has studied and conducted research in  countries such as Egypt, Syria, Turkey, Morocco, Saudi Arabia, Yemen,  South Africa, India, Indonesia and Iran. His book publications include The Canonization of al-Bukhari and Muslim: The Formation and Function of the Sunni Hadith Canon (Brill, 2007); Hadith: Muhammad’s Legacy in the Medieval and Modern World (Oneworld, 2009; expanded edition 2017); Muhammad: A Very Short Introduction (Oxford  University Press, 2011), which was selected for the National Endowment  for the Humanities' Bridging Cultures Muslim Journeys Bookshelf; Misquoting Muhammad: The Challenges and Choices of Interpreting the Prophet’s Legacy (Oneworld, 2014), which was named one of the top books on religion in 2014 by the Independent; and Slavery and Islam (Oneworld,  2019). He has published articles in the fields of Hadith, Islamic law,  Salafism, Sufism, Arabic lexical theory and Pre-Islamic poetry and is  the editor in chief of the Oxford Encyclopedia of Islam and Law. Dr.  Brown’s current research interests include Islamic legal reform and a  translation of Sahih al-Bukhari. He is also the Director of Research at  the Yaqeen Institute. Sources quoted: ESTABLISHING OFFICIAL ISLAM? THE LAW AND STRATEGY OF COUNTER- RADICALIZATION by Samuel J. Rascoff http://www.stanfordlawreview.org/wp-content/uploads/sites/3/2012/02/Rascoff-64-Stan-L-Rev-125-1.pdf Banning of the hijab: understanding france's ongoing war: https://anchor.fm/lebreakdown/episodes/Banning-of-the-hijab-understanding-frances-ongoing-war-eu6suq --- Send in a voice message: https://anchor.fm/lebreakdown/message 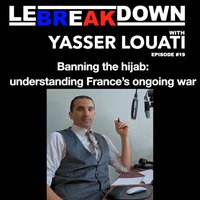 As the French Senate has passed a series of amendments against the Muslim headscarf, foreign flags in weddings and even threats againts organizations on political grounds, where is this legislative brutality coming from and where is France going? This podcast is independent thanks to our donors, please be one of them and help us sustain this project, from 1€ without commitment: www.cjl.ong/en/donation --- Send in a voice message: https://anchor.fm/lebreakdown/message 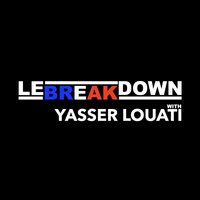 “Civil disobedience: if not now then when?” Malia Bouattia on Le Breakdown

Malia Bouattia is the former head of the National Union of Students (NUS) in the UK. She was the first female Black British and Muslim leader of the historic student union in a landmark election that took place in 2016. She brought forward the issue or race, class and gender and was a leading voice for better access to education especially for minorities. Malia Bouattia also stood against the PREVENT provision that criinalised Muslim communities in the UK in the name of fighting terrorism. Malia Bouattia is aso Editor at Redpepper Magazine and is herself a contributor to several news outlets, including The Guardian, Middle East Eye, The New Arab and the HuffPost. She is currently a host on the British Muslim TV panel show Women Like Us. In this conversation, Malia gave her analysis of shrinking spaces in the West as several prominent academics are being silenced by the government as is the case for David Miller, if not outright brutalised at gunpoint like Dr Farid Hafez from the University of Salzburg. The conversation further expanded to highlight the ongoing bullying of civil society by the Macron government, the calls to censor criticism of israel by zionist organisations in the West acting on behalf of local israeli embassies, student organizing, the role of Muslims in fighting human rights violations and finally, why time is for “civil disobedience”. --- Send in a voice message: https://anchor.fm/lebreakdown/message

From Left to Right: the islamophobia consensus in France

What does it say about a country when the current Minister of Interior Gerald Darmanin singles out the far right leader Marine Le Pen for being "too soft on Islam and in need of vitamines"? When the far left leader Jean Luc Mélenchon has a forty year track record of supporting anti-Muslim controversies to the point of supporting Marine Le Pen when she refuses to cover her head in a Mosque in Beirut for: "No one tells French people what to wear"? From the rush to Africa to the birth of the fifth Republic in 1958 following a pro Charles de Gaulle coup d'État, from the French Revolution in 1789 to the fall of the Vichy Regime in 1945, has France really distance herself from white supremacy?--- Send in a voice message: https://anchor.fm/lebreakdown/message

Let’s stop pretending the attempted coup is “unamerican” or a shocking surprise. Guest: Tory Russell, Movement For Blak Lives Organizer After Trump supporters stormed Capitol Hill to contest Joe Biden’s election and left 5 people dead and an outraged political and media elites, questions remain on what this event reveals and what the aftermath would look like for America. ***IF YOU BELIEVE THIS PODCAST DESERVES YOUR SUPPORT, PLEASE MAKE A DONATION ON CJL.ONG/EN/DONATION*****THANK YOU!**** As it turned out the rioters were far from being unprepared, information suggest that there has been support at the highest of the state to allow the assault to take place. why didn’t the DC Police better prepare for it? How come the governor of Maryland Larry Hogan offered to send the National Guard but could not get the green light to do so? Why was the Secretary of Defense out of reach as people were trying to call him? What does this event mean for the american grassroots struggling against white supremacy and a hostile Democratic Party. To answer these questions, Ferguson Organizer and Mouvement For Black Lives Co-founder Tory Russell joined the show to give his insight and analysis and to offer leads on what can be accomplished in the aftermath of the attempted coup. SUBSCRIBE AND LISTEN TO LE BREAKDOWN on: iTunes, Spotify, Deezer, Google podcast, Stitcher, Radio Public, Breaker, Overcast, Pocket Casts, Podbean and all major podcasting platforms. Send in a voice message: https://anchor.fm/lebreakdown/message

French Colonial Islam: The Case of the Grand Mosque of Paris

How the historic institution is a symptom of the ills of French society and the French government’s relation with Muslims. Of all the media, it is to Charlie Hebdo that the rector of the Grand Mosque (of Algiers) of Paris Chems Eddine Hafiz went to call out and blame his friends from the French Council of the Muslim Faith for the failure of his "charter of values" to be signed by French imams. Following his speech on "islamist separatism", Macron demanded that "Muslim leaders" come up with a charter to make sure imams abide by French values. The proposed charter of Imams &amp; National Council of Imams has been a clear assault on: #Laïcité for the government wants to meddle in Muslims' religious and clerical affairs. Freedom of conscience: what kind of Islam they can practice Freedom of expression: what they can talk about. Nevertheless, CFCM member federations agreed to draft one...but the Rector of the Grand Mosque of Paris  went behind their back and offered to the Minister of Interior (the same guy who linked halal food with terrorism) a draft that goes above and beyond. The draft proposed by the Rector of the Grand Mosque of Paris would prohibit Imams from speaking of "state racism", "state islamophobia", foreign conflicts (i.e Palestine), even to get involved in community organizing. The Min. of Interior was DELIGHTED by this abdication. But after the Ambassador of Algeria declared: "the Grand Mosque of Paris belongs to Algeria" https://algerie360.com/20201220-la-grande-mosquee-de-paris-est-dabord-algerienne-selon-lambassadeur-dalgerie-en-france/, he had to backtrack. Of course, when he went to whine at Charlie Hebdo he blamed "antisemitic islamists" but not the Algerian chain around his neck. What is quite shocking is the silence of both Emmanuel Macron and his Minister of Interior Gerald Darmanin. That a foreign ambassador makes such declaration should have sparked a diplomatic row. Yet nothig happened. Why such embarassing silence? SUBSCRIBE AND LISTEN TO LE BREAKDOWN on:iTunes, Spotify, Deezer, Google podcast, Stitcher, Radio Public, Breaker, Overcast, Pocket Casts, Podbean and all major podcasting platforms.--- Send in a voice message: https://anchor.fm/lebreakdown/message

Colonial continuum in Morocco: Palestine, the Western Sahara and Zionism

Guest: Dr Hatem Bazian, Hatem Bazian is a co-founder and Professor of Islamic  Law and Theology at Zaytuna College, the 1st Accredited Muslim Liberal  Arts College in the United States. In addition, Prof. Bazian is a  lecturer in the Departments of Near Eastern and Asian American and Asian  Diaspora Studies at the University of California, Berkeley. Dr. Bazian  between 2002-2007, also served as an adjunct professor of law at Boalt  Hall School of Law at the University of California, Berkeley. He teaches  courses on Islamic Law and Society, Islam in America: Communities and  Institutions, De-Constructing Islamophobia and Othering of Islam,  Religious Studies, and Middle Eastern Studies. In addition to Berkeley,  Prof. Bazian served as a visiting Professor in Religious Studies at  Saint Mary’s College of California 2001-2007 and adviser to the  Religion, Politics and Globalization Center at UC Berkeley. --- Send in a voice message: https://anchor.fm/lebreakdown/message

© 2020 OwlTail All rights reserved. OwlTail only owns the podcast episode rankings. Copyright of underlying podcast content is owned by the publisher, not OwlTail. Audio is streamed directly from Yasser Louati servers. Downloads goes directly to publisher.