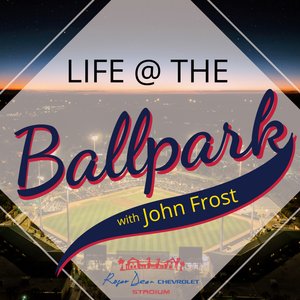 For those who love baseball, Life At The Ballpark gives you an inside peek into the game with entertaining stories from those who play it, scout it, and broadcast it every single day.Life At The Ballpark is hosted by John Frost, a veteran broadcaster and has spent over 20 years as the public address announcer for the St. Louis Cardinals and Miami Marlins and their minor league clubs in Jupiter, Florida.

Mike Claiborne: How To Have Fun Covering the Cardinals

Pat Williams, Senior Vice President and founder of the Orlando Magic, a recipient of a Lifetime Achievement Award from the Basketball Hall of Fame, and named one of the 50 most influential people in NBA history.   Pat’s love for baseball dates back to growing up with Ruly Carpenter, the son of the owner of the Philadelphia Phillies.  Pat played baseball at Wake Forest and two years in the minor leagues in the Phillies organization.   He moved to the front office and was named executive of the year several years. Pat shares about the phone call that changed his life, his relationship with legendary owner Bill Veeck, and about the 100+ books he’s written including the latest “Character Carved in Stone”, highlighting the leadership secrets of the United States Military Academy at West Point.

Mid-America Emmy award-winning Dan McLaughlin shares stories from his more than two decades of calling Cardinals’ baseball, his first when he was only 23.  Dan shares about his most embarrassing moments (involving A.J. Burnett’s nipple rings), his friendship with Tim McCarver, advice given him by the legendary Jack Buck, and his love of the game and the team he grew up rooting for (Ozzie Smith was his favorite player).

Ricks shares his observations about how spring training has changed over the 42 years he’s covered the St. Louis Cardinals.  He shares stories about Cardinal greats Red Schoendienst, Lou Brock, Albert Pujols, and gives insights to how roster decisions are made during spring training. Rick also shares stories from his Hall of Fame induction in Cooperstown, New York in 2007, along with Tony Gwynn and Cal Ripken.

On this episode, you’ll hear the story of a man whose knowledge of his team’s history and his view of every game from right next to the dugout give him a unique perspective to the sights and the sounds of the ballpark.   In the second part of our conversation Astros’ team historian, Mike Acosta shares the importance of his favorite player Nolan Ryan returning to the team, the story behind retrieving artifacts for their hall of fame, and conversations he had with former presidents sitting next to the dugout.

In part two of this interview with Curt Nelson, he will share the insightful stories recorded within the Negro League Hall of Fame.  Discover how this talent-rich league of African-Americans helped shape even more than just baseball history, it shaped American history.

Ken Carson: From Hockey Trainer to President of a Baseball League

Ken shares stories spanning his career as an athletic trainer for Pittsburgh Penguins hockey, then for the expansion Toronto Blue Jays in 1977, then director of spring training for the Blue Jays in Dunedin, and ultimately to the president of the Florida State League.  Ken reveals that he is also to the answer to a question in Trivial Pursuit Canadian edition.

On this episode you’ll hear Tom Grieve share about his life at the ballpark, from being a #1 draft choice, to player for one franchise in two different cities, to GM, to longtime broadcaster for the Texas Rangers.   A member of the Texas Rangers' Hall of Fame Tom has been a witness to every major event in Rangers' history.

Bill Brown of the Houston Astros

On this episode, you’ll hear the story of Bill Brown whose 30-year broadcast career with the Houston Astros gave him a unique peek into baseball history, including their 3 consecutive one hundred loss seasons followed by 3 one hundred win seasons, and the entire career of two Hall of Famers, Craig Biggio and Jeff Bagwell.   “Brownie” shares how his time in the military set the stage for his broadcasting career, about his major league debut which was remarkably a Cincinnati Reds’ division-clinching game, and about his worst day in the broadcast booth when Astros manager Larry Dierker’s had a seizure in the dugout.

Dann Bilardello: Stories from the kid who took over for Johnny Bench

Dann shares what it was like to have to step into the shoes of future Hall of Famer Johnny Bench in his rookie year with the Cincinnati Reds. You'll also hear about the respect and friendship he developed with another Hall of Famer, Tony Gwynn with the San Diego Padres.  Dann is currently the Manager of the Palm Beach Cardinals in the Florida State League at Roger Dean Chevrolet in Jupiter, FL.

The 14-year major league veteran shares what it was like to hit a walk-off home run in extra innings against Arizona in the 1999 NLDS playoffs.  Todd was also on the bases for one of the rarest plays in baseball history—now referred to as Robin Ventura’s walk-off “Grand Slam Single” in the ’99 NLCS.

Curt Nelson has been with the Kansas City Royals since 1999. Curt isn't just the Director of the Royals Hall of Fame, he helped spearhead its development in 2009.  Curt shares stories from their two World Series Championships as well as their four AL pennants.

Ricky Horton pitched for the St. Louis Cardinals, Los Angelos Dodgers, and Chicago White Sox before moving to the press box as a play-by-play announcer for Fox Sports Midwest.  During his time on the field, Ricky Horton experienced some of the most dramatic moments in baseball history, including one of the worst blown calls when Don Denkinger called the Royal's Orta safe at First Base.  Ricky also shares what it was like to be on the field when Kirk Gibson, with two injured legs, hit a two-run walk-off home run against Dennis Eckersley to win Game One of the 1988 World Series 5-4. Plus you'll hear about all of the emotions and memories when he was first called up to the majors.

The veteran reporter shares stories from his 17 years covering the Marlins, from their World Series championship in 2003 to the sale to Derek Jeter’s ownership group and the rebuilding process. Joe offers insight into the convergence of tradition newspaper sports reporting to the digital age of MLB.com and social media.

Mike’s love for baseball was fueled by his childhood fascination with the 8th Wonder of the World; the Astrodome, an architectural innovation that forever changed the design of sports stadiums.    Mike shares about his documenting of the historic moments in Astros’ history, including this season’s creation of the Astros’ Hall of Fame.

© 2020 OwlTail All rights reserved. OwlTail only owns the podcast episode rankings. Copyright of underlying podcast content is owned by the publisher, not OwlTail. Audio is streamed directly from John Frost servers. Downloads goes directly to publisher.