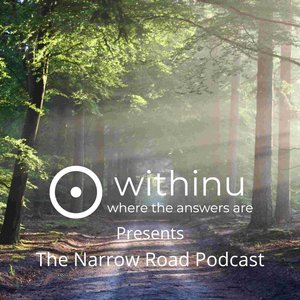 withinu founder, Danny Matharu speaks with Business Owners/Entrepreneurs and Sports People to delve into what has made them and continues to make them the individual they are.Candid conversations about their lives and careers to reveal the person behind the success.Why 'The Narrow Road'?Anyone who has become successful is all too aware that at times, the road to success is often a lonely, narrow one that few walk down. This brings the realisation that the biggest battles mostly come from within.Most people desire an easy and broad road in their journey of life. Who would want to walk the narrow road, and why.....? This Narrow Road is littered with mistakes, failures and the constant temptation to turn around and join the broad road like the rest.Continuing on this Narrow Road however, bestows these individuals with more than they could have ever imagined.“Narrow is the gate and difficult is the way which leads to life, and there are few who find it.” – Matthew 7:13-14www.withinu.net 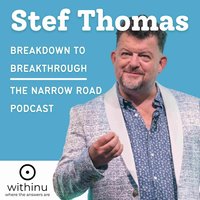 Stef Thomas is widely regarded as the UK's foremost voice on Business Networking. His achievements in the business world would usually mean that he would appear on The Narrow Road, talking about his entrepreneurial journey, discussing how he has got to where he is now. Where he is now in the business world includes being the author of three best-selling books on business networking, international keynote speaker, the founder of The Networking Retreat, business consultant, ex-Network Director of 4Networking and genuinely, all-round bloody good guy! What actually brings Stef to The Narrow Road is a blunt, honest discussion about his mental health and the events that led to his 'breakdown' where he was detained under the Mental Health act and in his own words 'spent a week in a mental hospital'. Upon being discharged, Stef was informed he would have to wait 14 months for an assessment. This is an amazing episode where Stef shares what happened and how he manages his mental health by rebuilding his life in a way that suits him. Click here for Stef's BooksClick here for the Networking Retreat 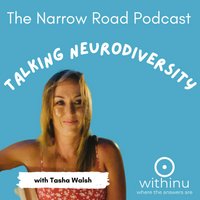 In the first episode of Season 2 of The Narrow Road, Danny welcomes Tasha Walsh, of Seen and Heard Therapy. Season 2 of The Narrow Road focuses on the many aspects of Mental Health. This episode is released in time with Neurodiversity Celebration Week (March 15-21, 2021) and Tasha talks about neurodiversity and how neurodiverse people are 'superheroes' and often responsible for some of the world's greatest achievements. She speaks about how we need to understand better the strengths and needs of neurodiverse people and not to judge too quickly if we see someone who may seem to be acting away from the 'norm'. It's a powerful, eye-opening episode with loads of learning points. Tasha Walsh - Qualified. Experienced. Compassionate.Tasha offers a range of therapies for adults, children and young people. She has a passion for working with neurodiversity &amp; with LAAC and their families. Tasha uses a range of methods depending on the individual needs and she operates a confidential service. She has experience of working with adults and working with children in a school setting.She has a special interest in working with Neurodiverse people and has trained in a specialist play therapy called Autoplay Therapy devised specifically for Autism and other neurodivergent people. https://seenandheardtherapy.co.uk/ https://embracingcomplexity.org.uk/ 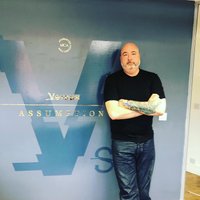 Julian Kynaston is quite simply a Business Icon. No introduction is needed for this guy. The episode begins with Julian speaking about his days in the world of football hooliganism which translated into his understanding of the power of branding and led to him printing bootleg branded t-shirts to supplement his need for expensive, non-bootleg branded clothing. The hooligan element of Julian's life got out of hand which led to him getting death threats down the phone as well as thirty plus rival hooligans waiting for him outside his grandparents' house - all at the age of 17......... At age 19 he realised it was time to get out so he told his hooligan 'family' he was quitting to set up in business. The rest (as the cliché goes) is history........."It is a mindset. When people think they're at the final door, there are 50 doors. When you're at the very end and you've run out of ideas, ring me. I'll come up with six more, don't worry." 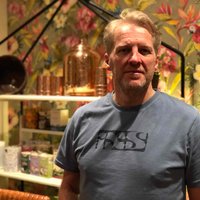 Part 4 concludes this fantastic episode with David explaining how he has learned to trust as well as discussing his coaching role and how he gets the best from his clients - going from being 'ferocious' with them in the past to now adopting a more 'gentler' model. David's closing words...."I'm very, very present. That's how I feel and that's how I am." 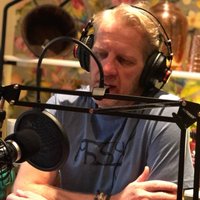 Part 3 continues with David explaining the 4 hours of unimaginable pain, due to the decision he made in Part 2 to save his father's life."I'm just dying.... I'm confused, but I'm definitely dying..... I felt I had taken my last breath."After the event, the other people in David's group explained to him that they did actually think he was dying and how they were screaming at the Shaymen to intervene and help him as they were that concerned.It came out that David had experienced an actual 'spiritual death'.We then move onto Day 2, where Mother Ayahuasca shows him his life from his wife Jacqui's perspective.She reveals the sacrifices Jacqui had to make to ensure David had the support from her to make the business the success it came to be.What comes after this though is mind-blowing, leaving both David and Danny in tears........ 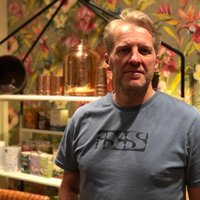 We continue as David discusses his take on being sick and crying and then move onto his first night at Rythmia (https://www.rythmia.com/) as the Ayahuasca kicks in.....Mother Ayahuasca takes him back to his childhood home where she shows David his 7 year old self watching his dad crawling around the living room floor, suffering intense pain. She then reveals the reason why he is in agony which leads David to make an unbelievable decision on the spot..... 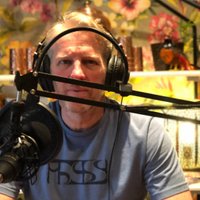 In this Podcast we welcome back Huddersfield based Entrepreneur David Cooper. David was the inaugural guest on The Narrow Road. We discussed his entrepreneurial journey but ended up hearing about some serious revelations when he took a trip to Costa Rica to undertake an Ayahuasca Ceremony. Ayahuasca — also known as the tea, the vine, and la purga — is a brew made from the leaves of the Psychotria viridis shrub along with the stalks of the Banisteriopsis caapi vine. When combined, these two plants form a powerful psychedelic brew that affects the central nervous system, leading to an altered state of consciousness that can include hallucinations, out-of-body experiences, and euphoria.Not content with having done it once, David recently took another trip to Costa Rica to put himself through it again. Such has been the feedback and listener numbers from the first Podcast, we had to get David back to hear about what Mother Ayahuasca delivered this second time around. Like the first Podcast, this is truly revelatory and just gets better as the story goes on further down the Podcast. 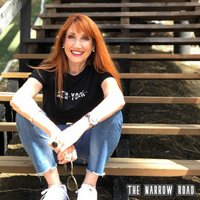 In Part 2 we pick up where Jackson showed Nicky all was well on his 21st by leading her to a meeting with a celebrity in the Beverly Hills Hotel in L.A.We cover what led to the breakdown of her marriage which left Nicky £250,000 in debt, resulting in her losing her home, her business and most of her inheritance."I was depressed, without any question. And in absolute terror....." Nicky's story is one that I still struggle to comprehend how so many bad things can happen to one person at all, let alone in such a short period of time.Nothing stays broken forever and Nicky explains how 'The Fixer' found her, transforming her life....From here, we discuss her first speaking gig with the IoD, which opened the door to the stellar career she has now........"When you're in a bad place, the best thing you can do is go out there and frickin' Be Someone."Nicky Online: www.nickypattinson.comTwitter: @hiyaitsnickyInstagram: @hiyaitsnicky 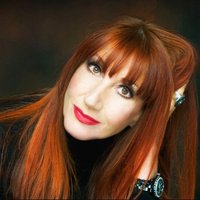 Nicky Pattinson: "Be Someone" - Part 1

Nicky Pattison hails from Holmfirth in Yorkshire (you'll hear the accent), England.She's a powerhouse of a woman who has experienced devastating loss and turned it into amazing success.No words I write on here can express what has happened to her. As well as being an internationally renowned business speaker, Nicky works with massive retail brands like Tesco, Halfords and Illamasqua as well as law firms, media companies and branding agencies to transform their internal sales cultures.In Part One of of a Three Part 'Be Someone' we discuss Nicky's upbringing on a farm and how as a 5 year old, she knew even then what she was born to do.A tumultuous relationship with her parents lead to a tumultuous marriage and Nicky never feeling she was good enough for anything or anyone.Nicky found her place at a Biscuit Stall, within Huddersfield Market that she and her husband ran, taking it from a turnover of £1,000 per week to nearly £2 million a year within two years.Things looked rosey from the outside, but devastation was in the post.......It's a story of utter, utter desolation. I was in tears listening to what Nicky has overcome. This is a raw, unbelievably honest and open conversation."I used to put my hands over the gas ring and burn my hands because it wasn't as painful as the bloody pain in my heart...."Nicky Online: www.nickypattinson.comTwitter: @hiyaitsnickyInstagram: @hiyaitsnicky 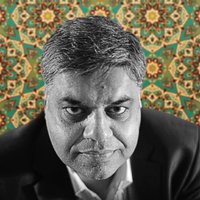 Ajaz Ahmed BEM - Founder of Freeserve Pt 3: Cashing in on Success, Apple Product Launches and the Future of the Internet.

Part three talks about the dotcom bust and how although this affected the share price of Freeserve, it didn't affect the success of the product as more and more people were wanting to get on the internet.This led to Dixons wanting to cash in on Freeserve, selling the product for £1.5bn after it only being in existence for three years......After the sale of Freeserve Ajaz left the company and sold his shares, which allowed him to live debt-free, pay off his mortgage and live a life of freedom.Ajaz went from Retail Manager to freedom in five years.....This led to Ajaz being invited to many of Apple's iconic product launches, including the actual original iPhone.We move onto what Ajaz is doing now, what he has learned and where he believes the internet is heading in the future, including how AI will affect our lives. "We are only limited by our imagination."

© 2020 OwlTail All rights reserved. OwlTail only owns the podcast episode rankings. Copyright of underlying podcast content is owned by the publisher, not OwlTail. Audio is streamed directly from Danny Matharu servers. Downloads goes directly to publisher.