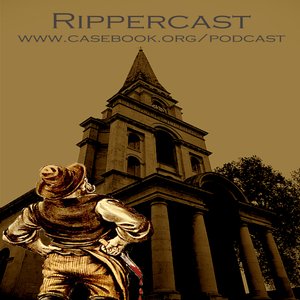 Rippercast- Your Podcast on the Jack the Ripper murders

Listen in as Jonathan Menges, joined by a roundtable of co-hosts and special guests discuss topics related to the Whitechapel Murders, Jack the Ripper, Victorian British history, and whatever else suits their fancy. This free and loose discussion is sure to interest everyone involved in the 120 year long hunt for 'Jack the Ripper'

Rippercast welcomes researcher Robert Anderson to further discuss the Long Island Serial Killer case, this time bringing to our listeners new information that is contained in as-yet unreleased Suffolk County Medical Examiner's report on the death of Shannan Gilbert. As an added bonus following the main one-on-one interview we include another conversation Mr. Anderson was able to have with Forensic Crime Scene expert Dr. Charles Tumosa.

The Life and Death of Mary Jane Kelly: Part 1

This episode of Rippercast commemorates the 120th anniversary of the death of Mary Jane Kelly. Part one of a two part podcast. Listen in as Paul Begg, Chris Scott, Robert McLaughlin, Gareth Williams and Ben Holme join Jonathan Menges in a discussion of this most famous, and most elusive, of 'Jack the Ripper's' victims. Topics include researching Mary Jane Kelly in the census records in both England and Wales, and scrutinizing the biography of Mary Kelly as it was told by Joseph Barnett and others.

Kosminski Was The Suspect

This episode is a discussion of contemporary police suspect 'Kosminski;. Listen in as special guest researcher and author Rob House joins the podcast for a detailed look into the Polish Jew's candidacy for the title of Jack the Ripper and the events of Aaron Kosminski's life. Also featuring Paul Begg, Chris Scott, Robert McLaughlin, Ally Ryder and Jonathan Menges

Jack the Ripper Suspects: A Conversation with Paul Williams

Rippercast is pleased to welcome to the show Paul Williams, the author of the book 'Jack the Ripper Suspects: The Definitive Guide and Encyclopedia'. Joining us for this round table discussion is also authors Paul Begg and Neil R.A. Bell.

Oh, Dear Boss: The Ripper Had All The Luck

This episode of 'Oh, Dear Boss' is a wide-ranging conversation that includes topics such as the Double Event, Goulston Street Graffito, the Seaside Home identification, Robert Anderson, Henry Smith, and the pluses and minuses in the suspect candidacy of Charles Le Grand. With Tom Wescott, John Malcolm, Robert McLaughlin, Jon Rees, Ally Ryder and Jonathan Menges

An Incident at Oak Beach: Ripperologists look at LISK

This episode of Rippercast surveys the history of the Whitechapel Murders in documentaries. Listen in as Jonathan Menges and Mike Covell, joined by special guest, author Philip Hutchinson, discuss Jack the Ripper documentaries on video, DVD and television from 1959 to the present day.

Tumblety: The Hidden Truth interviews author Michael Hawley and researcher Brian Young about the contents of over 600 pages of Saint Louis County legal documents that have been recently discovered which for the first time describes Tumblety traveling with a collection of surgical knives as well as containing further evidence of Francis Tumblety's hatred of women, particularly prostitutes. Plus, the startling sworn depositions from these early 20th century documents that reveal Tumblety was born with a sexual development disorder that classified him as a hermaphrodite.

Another Fiendish Crime: The Murder of Annie Chapman

Episode #41 covers the life and death of Annie Chapman, who is considered the second canonical victim of 'Jack the Ripper'. Listen in as the panelists discuss the discrepancies between the witness testimonies and the attending doctor's estimated time of death, and also hear their opinions on the medical knowledge of the murderer, and how long it would have taken him to commit this crime. We also contrast the Chapman murder with others in this series, as well as discuss the effect this murder had on Chapman's family, both immediately after the murder and through subsequent generations. With Chris Scott, John Bennett, Gareth Williams, Ben Holme and Ally Ryder.

Rippercast is pleased to bring to you the February 2017 guest speaker from the meeting of the Whitechapel Society 1888. Mick Priestley is the author of the newly released book 'One Autumn in Whitechapel' and his talk is entitled 'Jack the Ripper: A Modern Day Investigation'.The slides that accompanied Mick's talk can be downloaded here.M. P. Priestley's book is available to purchase at www.ripperworld.netwww.whitechapelsociety.com

This episode is a conversation featuring authors Martin Fido and Paul Begg. Author and researcher Chris Scott sits in as well as Prof. Lavaughn Towell. The discussion centers on Fido, Begg and Skinner's work on the updated book 'Jack the Ripper A-Z', and some challenges faced by authors and researchers when working on the Whitechapel murders. Ally Ryder, Robert McLaughlin, Mike Covell and Jonathan Menges co-host.

We are pleased to bring to you the April 2019 speaker at the Whitechapel Society 1888. Jo Vigor-Mungovin is one of the world's leading experts on the life and times of Joseph Merrick, the Elephant Man.She is the author of the excellent book 'Joseph: The Life, Times and Places of the Elephant Man' which can be purchased by visiting Mango Books. www.mangobooks.co.uk Also available on Amazon.For more information about the Whitechapel Society please visit www.whitechapelsociety.com

Re-Investigating The Ripper: A Conversation with Trevor Marriott

Rippercast welcomes to the podcast Trevor Marriott, author of the books Jack the Ripper- The 21st Century Investigation and The Evil Within- The World's Worst Serial Kilers. Listen in as we discuss with Mr. Marriott the possibility that the Ripper was a merchant seaman, and he provides details about his suspect for the Whitechapel Murders, Carl Feigenbaum. We also discuss with Trevor some of the more controversial aspects of his theories that claim to correct misconceptions that have surround the case.

Episode 63 welcomes Friends of Joseph Carey Merrick Chairperson and founder Jeanette Sitton to the show, along with historical researchers Philip Hutchinson and Neil Bell, to discuss the life and times of an individual that was perhaps the most famous resident of the East End of London during the time frame of the Whitechapel Murders: Joseph Merrick, the Elephant Man.Jeanette Sitton is also the co-author with Mae Stroshane of the essential Merrick biography 'Measured By The Soul'.Philip Hutchinson is the playwright and co-star of the Lucky Dog Theatre Production's play 'Mr. Merrick, The Elephant Man'.Neil R. A. Bell is the author of 'Capturing Jack the Ripper: In the Boots of a Bobby in Victorian London' as well as being responsible, along with Adam Wood, for the reissue of 'Howard Vincent's Police Code 1889'.This interview was conducted by Jonathan Menges.

We are pleased to be able to bring to you the guest speaker for the February meeting of the Whitechapel Society 1888-Chris Jones with 'Bruce &amp; Florence: Busting the Conspiracy', in which Chris gives us his take of the Bruce Robinson book 'They All Love Jack' and takes questions from the audience. Chris Jones is the author of the Maybrick A-Z and manages the website jamesmaybrick.org.www.whitechapelsociety.com

On this 'Oh, Dear Boss' mini-podcast, listen in as Iain Wilson, Trevor Bond and Jon Rees join host Jonathan Menges in a discussion of the Kray's movie 'Legend'; upcoming book releases, Jon Rees' play 'The Murders and Mystery of Jack the Ripper' and the 'Jack the Ripper' addition to the video game 'Assassin's Creed: Syndicate'.

Rippercast is pleased to bring to you author John Malcolm's talk from the 18882016 gathering at the White Hart Pub in the East End of London, 5 &amp; 6 November, 2016. His presentation is entitled 'Sir Robert's Revelation: A Definitely Ascertained Fact or Another Dead End?' Mr. Malcolm examines the history of Sir Robert Anderson's numerous comments that the identity of Jack the Ripper was known, that he was a Polish Jew, and caged in an asylum. The Whitechapel Murders of 1888: A Subjective Look into the Mystery and Manipulation of a Victorian Tragedy can be read in it's entirety hereA PDF version of the slideshow can be downloaded here.Episode artwork by Andrew Firth

Ripper Confidential: One on one with Tom Wescott- Part 1

Rippercast is pleased to welcome back author Tom Wescott to discuss his new book 'Ripper Confidential: New Research on the Whitechapel Murders'. In this episode we discuss the murder of Mary Ann Nichols on the 31st of August, 1888. Part one of a two part interview.

Episode 67 of Rippercast welcomes Dr. Mark Curbishley taking part in a discussion of the possibility that the murderer of any one of the "Canonical" five victims may have had some type of surgical skill or training. In the later part of the show we address the worthiness of, and moral and ethical issues surrounding the human organ experiments conducted by author Trevor Marriott while researching his 2008 book 'The Evil Within'.With Jon Lee Rees, Jonathan Menges, Iain Wilson, Gareth Williams, Ally Ryder and Mark Ripper.Hosted by Trevor Bond.

© 2020 OwlTail All rights reserved. OwlTail only owns the podcast episode rankings. Copyright of underlying podcast content is owned by the publisher, not OwlTail. Audio is streamed directly from Rippercast- Jack the Ripper servers. Downloads goes directly to publisher.