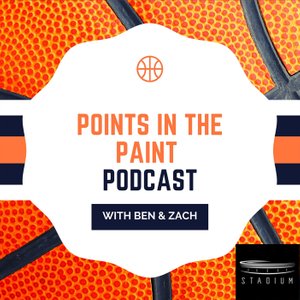 Points in the Paint Podcast

Ben and Zach review the week that was in the NBA, including looking at key fantasy matchups, diving into what's hot in NBA Twitter, and much more. 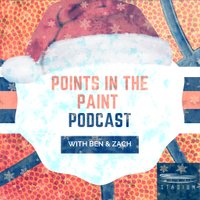 NBA Christmas talk, Ben Simmons is a bigger Rajon Rondo, and we believe in the Miami Heat

Merry Christmas and Happy Hannukah! In our holiday-themed episode, we talk about which teams are on the nice and naughty list (1:31), our Hannukah teams that have done better than expected (14:53) and what gifts NBA fans want for their teams (19:20). We also look at the increased long three-pointers (22:21). And our look at NBA Twitter includes Christmas jerseys and picking on Ben Simmons (34:06).

Teams and players we're worried about, should the tanking begin?, and Scottie Pippen says he can get 40 in today's NBA

2nd Half Predictions, The Greatness of the Bucks and LeBron, and Jayson Tatum Surging

For this week's episode, we make our second half (last third?) predictions (1:34), debate who can take their team further, Jimmy Butler or Joel Embiid (9:39), and dissect what makes the Bucks so great this season (15:55). We also talk about LeBron for our Stat of the Week (20:34). We also talk about Jayson Tatum's amazing 2020 thus far (28:25). For NBA Twitter, we look at Dwyane Wade's jersey retirement and the Kings sending everyone Valentine's Day cards (33:09).

Knicks are a rudderless ship, LeBron doesn't have shoes, and good teams with no superstars

The first head coach firing of the season in the NBA comes thanks to the New York Knicks, we talk about that (1:44) and debate which formula is better for winning: a superstar with role players or many smaller stars (6:53). We also compare NBA rookies to The Expendables and Suicide Squad (14:18). Is it an overreaction to say the Lakers can go 73-9? (19:27). And we look at the week in NBA Twitter, which included James Harden yelling at a fan, and LeBron James traveling and not wearing shoes on the court (23:28).

Jimmy Butler is fighting people again, we talk about it (1:45) and look at the league's most overpaid players at this point in the season (7:02). We also go over the new week's All-Star ballot returns (16:17). Are the Utah Jazz contenders now? We discuss (26:05). NBA Twitter talk includes Russ's return to OKC and Kevin Durant getting in a fight with Kendrick Perkins (31:39).

The full all-star teams are here so we dissect them and the new all-star game rules (2:03), and we look at some teams that are buying and selling at the upcoming trade deadline (13:41). We also discuss Dame Lillard's recent hot streak (21:12) and Billy Donavan's Coach of the Year chances (26:36). For NBA Twitter talk, we look at Steph's top 5 NBA players and Aaron Gordon in the dunk contest (29:27). 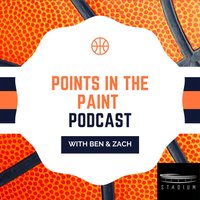 The Smallball Rockets, the flailing Jazz, and Giannis vs. Harden

We look at the Celtics vs. Rockets matchup and how that will impact the rest of the season (1:30), the Jazz have struggled since the All-Star break and we look at what could fix them (6:35), and what the playoff picture looks like as we approach the final month of the regular season (11:01). We ask what teams not currently in the playoffs could make a run to get in (20:20). We also dissect the Giannis and Harden beef in our NBA Twitter segment (30:38).

It was a successful All-Star Weekend in Chicago! We recap everything from the celebrity game (2:41), the game itself (5:23), and the three-point and dunk contest (13:30). We also look at an amazing stat about Kawhi Leonard (25:34) and report on what went on on NBA Twitter during All-Star Weekend (31:52).

The Thunder streaking, Brandon Ingram's legend is growing, and the death of the baseline two-pointer

This week we talk about how big Shai Gilgeous-Alexander has been for the Thunder (1:57), the Rockets' struggles (5:27), and a new WNBA deal (11:05). We also look at Brandon Ingram's recent dominance (14:28) and where the Memphis Grizzlies and Ja Morant stand (18:59). Finally, our NBA Twitter check includes Bulls' potential future moves and the change in NBA shot selection (22:25).

Best Point Guards from the 2000s, MJ the GOAT, and Michael Rizzo the Guest

This week, we talk everything going on to get the NBA regular season back (1:42), including the opening of facilities (11:22). We also reveal who our favorite point guards of the 2000s are (21:22), and we re-hash the MJ GOAT argument. We also talk about NBA Twitter, including The Last Dance (35:16), and talk with Stadium's Michael Rizzo about his thoughts on the Last Dance and who he has as his favorite PG of the 2000s (51:10).

The Start of Next Season Pushed Back, Chris Paul to the Knicks, and the G League Rising

Still no NBA, STILL no problem. We take a look at Adam Silver saying they may push back the start of next season until December (5:20), the NBA opening up practice facilities and what it means (8:32), and Chris Paul possibly being traded to the New York Knicks (18:52). We also scan NBA Twitter and talk about Isaiah Thomas multiples getting mad, LeBron training, and more talk about the end of college basketball as we know it (kind of) (26:10).

The Bulls Have a New Executive VP of Basketball Ops, Trouble in Atlanta, and NBA Players Playing 2K and HORSE

In our quarantine episode, we talk all about the Bulls' new hire of Arturas Karnisovas to their Executive VP of Basketball Operations position, what it means for their head coach and their future (0:42). We also talk about the potential of an NBA Rooney Rule (24:22). We look at the NBA players now playing 2K from home (36:42), and some trouble possibly brewing between Atlanta Hawks head coach Lloyd Pierce and star Trae Young (42:26). We finally take a look at NBA Twitter, which includes LaMelo Ball buying his Australian basketball team and NBA and WNBA players competing in a televised H-O-R-S-E contest (46:40).

We're social distancing but can still podcast, so we talk about the NBA's moves in the past two weeks (2:00), Adam Silver's leadership through a global pandemic (9:34), and what we want to see happen in the coming months with the NBA (12:04). We also debate which NBA players are good at playing NBA 2k (17:15). Stat of the Week is looking at all the NBA teams and players donating money to arena workers (23:11), and NBA Twitter consists of players posting videos of themselves quarantined, and The Big3 league making plans for some basketball in mid-April (28:07).

The Nets head coach Kenny Atkinson gets canned before the end of the regular season, so we discuss what it means, his future, and the Nets' future (2:45), and some non-playoff teams who have the brightest futures (24:37). We also looked at the Bucks vs. Lakers game (38:00) and Aaron Baynes having a career night (45:05).

© 2020 OwlTail All rights reserved. OwlTail only owns the podcast episode rankings. Copyright of underlying podcast content is owned by the publisher, not OwlTail. Audio is streamed directly from Stadium servers. Downloads goes directly to publisher.