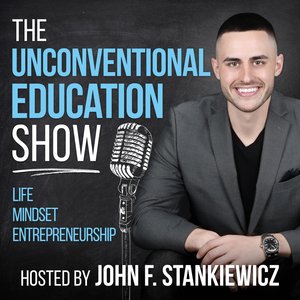 Serial Entrepreneur and Author of Beyond the Classroom John Stankiewicz brings to you the show that discusses everything mindset, entrepreneurship, and life experiences. John and his guests are committed to helping you elevate your game across the board while providing you with a healthy dose of entertainment along the way.www.johnstankiewicz.comIG: @johnstankiewicz

Serial Entrepreneur and Author of Beyond the Classroom John Stankiewicz brings to you the show that discusses everything mindset, entrepreneurship, and life experiences. John and his guests are committed to helping you elevate your game across the board while providing you with a healthy dose of entertainment along the way.www.johnstankiewicz.comIG: @johnstankiewicz

END_OF_DOCUMENT_TOKEN_TO_BE_REPLACED

The rawest episode that I have recorded to date.

Go to https://es101.thinkific.com/courses/entrepreneurial-secrets-101 for your free gift ($500 Value)

Join me for the FINALE of Season One to see why I decided to end this season & what is to come next!

One of my favorite things to do is show love to my friends who are taking an unconventional route, and my dude Maximilian Eanniello is doing just that with his revolutionary back yard boardgame Money Hole.

What's even cooler is seeing a good friend go from an idea that was first shared with me at our dining hall in college, to a rough plywood prototype, to enduring a multitude of trials and tribulations, to over 6 figures in sales through FB Advertising alone.

In this episode, Max and I met up for an in-person recording and he shared the entire journey of taking Money Hole from what people referred to as a "ridiculous idea", to something that is on the brink of bringing him financial freedom for the rest of his life.

To grab your Money Hole board, head to www.moneyhole.com or follow them on IG @money_hole

94: Should You Be Trading Crypto/Stocks/Forex???

With some of the craziest markets we have ever experienced, should you be trading cryptos, stocks, or forex?? In this episode, I tell you my thoughts and experiences from trading.

This week, I was joined by the world's most recognizable professional free runner & stuntman Jesse La Flair!

His international fans also follow his work as stuntman and character actor in commercials, T.V., and the biggest Hollywood hit films like X-Men Apocalypse as Nightcrawler (Stunt double), his guest star role in Hawaii Five-0, and appearances in TMNT, Divergent, 300 Rise of an Empire, as well as the lead Motion Capture artist for some of the biggest selling video games on the market like Uncharted 4 which he worked on for over 2 years.

He has also continued to raise his public stature by destroying the Los Angeles American Ninja Warrior qualifier courses with the fastest times 2 years in a row. Let's just say - this dude is a BADASS!!!

Check out this week's episode to hear Jesse & I's conversation about how he got into free running, his experience as a stuntman, how he blew up on social media, and so much more!

To connect with Jesse, follow him on IG @jesselaflair

92: Everything You Don't Know About Money

Ahhhh...nothing like a talk about money to start off your Monday right! In this episode, I went into money's purpose, its functions, what makes good vs bad money, and the history of money.

This topic is something few people actually understand, and I felt as though it was my responsibility to shed some light on it for you all! My goal with this episode is to shift your perspective and help you think a little deeper about that green paper that runs the world!

After dealing with a lot of people who quite frankly I don't want to bring on the show, I have decided that I am not going to force bringing a guest on every Thursday anymore! Instead, I will bring to you only the best of the best when it comes to guests!

For this episode, I shared a few crucial tips to building a brand with a culture people will ride or die for. Additionally, I shared a key clarity hack as it comes to who you are selling your business/product/service to. Tune in to this week's episode to find out what it is!

This week's title says it all - I just turned on the mic & went in! I talked about a few things that will hit home with a lot of you guys - excited to hear your feedback!

This week, I had an awesome conversation with Actress & Author of Silver Linings Jessica Impiazzi. On this show, I love having real & raw conversations with my guests, and Jess put it all out there on the table.

She and I discussed everything from her book Silver Linings, the writing process, her experience as an actress, our takes on the school system, mindset, trauma, and so much more. If you are looking for a great conversation packed with helpful tips to help you level up your life, you will 100% want to give this episode a listen!

To connect with Jess, follow her on IG @jess_impiazzi

To grab a copy of her book Silver Linings, head over to Amazon

88: Why People Won't Do Business With You

Launch Your Top-Rated Podcast in 30 Days or Less Course

This week, my business partner Ruben Alvarez & I got together to give you guys the lowdown on our joint venture Brand Masters!

We went deep into a discussion about branding, marketing, social media, and explained the mission Brand Masters is on.

To plug into our Brand Masters community, join our free FB group here!

To enroll in our Launch Your Top-Rated Podcast in 30 Days or Less Course, click HERE

You guys are in for an absolute treat this week!

For the first time, we recorded our episode with multiple guests & we could not have picked a better power couple to do it with: Dan Caldwell & Ildiko Ferenczi

You may know Dan Caldwell best for Co-Founding the TapouT clothing company which he sold in 2010 for $250 million dollars. He has appeared in a variety of TV shows, movies, and is an investor in a wide array of businesses.

His wife Ildiko is an entrepreneur, actress, model, and social media queen. She has an extremely impressive resume including film scenes with Matthew McConaughey, appearances in Maxim, FHM, Vanquish, Playboy, and has absolutely dominated in the social media realm where she exploded in popularity on the live broadcasting app Periscope.

Together, this couple hosts the Pretty and Punk Podcast where they help entrepreneurs raising kids or thinking about having kids flourish.

In addition, Dan & Ildiko cofounded @billionairecollectibles, where they curate autographed historical documents, from the worlds most coveted leaders and entrepreneurs, to create investments that inspire.

Check out this week's episode to hear the incredible conversation I had with this powerhouse entrepreneurial couple!

$1.9 Trillion Dollars fresh off the money printer. Where did this money come from? What does it mean for our country? What should you do with the $1,400 Joey B is wiring to your account? Check out this week's episode for the answers.

For FREE TIPS on how to build more credibility, authority, and income with your online personal brand, join our BRAND MASTERS FB GROUP

Marcus Chan spent 14 years in Corporate B2B sales where he worked for two Fortune 500 organizations, was promoted 10 times in 10 years, won countless awards, and was ranked in the top percentile of salespeople every single year.

After 14 years, he decided to take everything he mastered to the realm of entrepreneurship. Now, Marcus is the founder of Venli Consulting Group where he helps B2B sales professionals sell more and sell better without needing years of experience through his coaching and training programs. In addition, he is an executive member on the Forbes Business Council and has also been featured in Forbes, Yahoo Finance, Marketwatch, NBC, and many more for his top-level results.

In our episode, we had an excellent conversation regarding everything it takes to flourish in B2B sales. If you are a B2B sales rep or are considering getting into the field, this episode is a must-listen.

To connect with Marcus, follow him on IG @therealmarcuschan.

82: A Crash Course in Customer Service

This week, I had a not-so-great customer service experience. So bad, in fact, that I realized a lot of people don't understand the importance of this crucial skill in their business. In this episode, I give you a customer experience crash course so that you leave your customers feeling valued, respected, and raving about your business to their friends and family.

Jeff Lopes is a proud father of two, a husband, and an entrepreneur for the past 24 years.

Jeff has founded numerous companies from inception to 7 & 8 figure Corporations. Included in these is TrueBlue Homes, a portfolio of vacation rental properties across the Northern parts of Ontario, Canada and Kimurawear a boxing / martial arts equipment brand that was founded in early 2006 out of his own basement.

Jeff is currently a host of a top-rated entrepreneurial podcast Jeff Knows Inc. Over the past three years he has coached countless entrepreneurs in balancing the obstacles of fatherhood and entrepreneurship, and achieving higher levels of success in both areas. As Fitness Leadership College Graduate and certified NLP Master & Life Coach.

As a Best Selling Author, Jeff has taken all his experiences to create Mans Purpose a brotherhood for Entrepreneur-Dads. This membership-based platform was designed to lead men on creating a higher purpose within themselves physically, mentally, and spiritually. This will lead to greater levels of success within their business creating financial freedom, and giving these men an opportunity to become more present and active as fathers and partners.

In our episode, we talked about what it takes to build a million-dollar brand, Clubhouse, where social media is headed, and much more!

To connect with Jeff, follow him on IG @jefflopes

After a crazy month in Colombia, I recap the insane 24 hours of trying to get back to the states. Then, I talked about an obstacle that I have been facing for a couple of weeks now & how I am overcoming it. I get very vulnerable in this episode because I know the obstacle is something that everyone deals with and MUST learn to overcome. Hit the play button for the lesson that you NEED to hear.

79: The Most Dangerous Place to Live

Do you know where the most dangerous place to live is? The place that breeds contentment & the place that kills every single dream known to man? Listen to this weeks episode to find out where it is & how to avoid it by any means necessary!

This week's episode title speaks for itself. Short, sweet, to the point, however, this is a principle you must live by if you wish to be successful. Enjoy the show!!!