In the ongoing war between good and evil, Russell and Jelly just want to figure out which side they’re on. As they journey on their quest for clarity, they tear apart one topic at a time, leaving no doubt… or survivors. 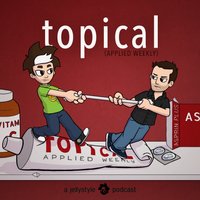 How often do you consider how your life will be in the future? If the book of your life ended now, how would the epilogue read? Russell and Jelly discuss the concept of looking forward and planning for the unseen future, whether it’s scary or hopeful, and what they think the future might be like for them.

Nothing lasts forever; eventually the heat death of the universe will claim us all. Russell and Jelly consider the ending of things from their lives—school, jobs, relationships, TV shows and podcasts—and how these experiences have affected them and shaped who they are.

78: Being Indie vs. Working for the Man

If you work for a big company, chances are, you’ve considered “going indie” at some point. The opposite is also true, as many indies pack up their things and join big companies in search of something different. Jelly and Russell consider the career moves they’ve made, and why they’d “sell out” if it ever came to that.

If you’re hungry, or tired, chances are you’re not going to be able to reach your fullest potential. Russell and Jelly take a look at the concept of basic needs, how they affect us, and whether some of these needs can be offset with something like a “universal basic income”.

Fitness trackers, from the Fitbit to the Apple Watch, are everywhere, and theoretically helping people improve their fitness, but are they all that they’re cracked up to be? To find out, Russell and Jelly look at how they exercise (or… don’t) and how fitness trackers have motivated them, both in the early days and after some time.

From Bitcoin to Dogecoin, the internet is filled to the brim with digital currency, and both Russell and Jelly have toyed with the idea of making it rich. But with support still lagging, and a significant amount of bad press surrounding the idea, has digital currency had it’s day?

First impressions count. The judgements we make about people or things when we first encounter them can sometimes stay with us for a long time, and colour our perceptions. Russell and Jelly take a hard look at their first impressions of each other, how they watch movies and TV shows, and why first impressions can often be completely and utterly wrong.

With Apple’s hardware in a state of stagnation, more and more people are revisiting the idea of the Hackintosh—custom-built PCs running OS X—which boast superior performance, but require additional maintenance and care. Russell’s a little scared that he’s missing out on the fun, so he and Jelly discuss what building one entails, whether it’s really worth it, and whether Apple cares about this resurgence.

Russell and Jelly discuss the social phenomenon that is Pokémon Go, an augmented reality game that has players everywhere going out into the world, collecting digital creatures and meeting real-life people. You’d be forgiven for thinking that this isn’t really that big a deal, but with so many stories of the community coming together, is there more to this game than just catching ‘em all?

There’s a plethora of management tools and methods dedicated to getting things done, and so Russell and Jelly throw it all out the window to talk about how they approach the things they need to remember to do, appointments the have coming up, and bills they need to pay.

© 2020 OwlTail All rights reserved. OwlTail only owns the podcast episode rankings. Copyright of underlying podcast content is owned by the publisher, not OwlTail. Audio is streamed directly from Daniel “Jelly” Farrelly and Russell Ivanovic servers. Downloads goes directly to publisher.