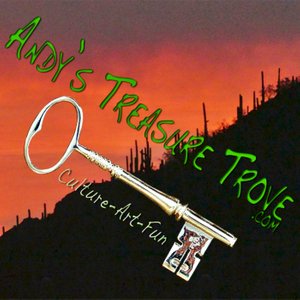 Welcome to the Andy’s Treasure Trove podcast, where your host Andy Moore interviews fascinating people and takes you along on audio adventures exploring Culture, Art, and Fun in San Francisco and beyond. PLEASE SUBSCRIBE to this podcast (it’s free) so that each episode will be automatically delivered to you. Thanks, and happy listening! 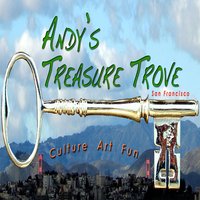 7 – Gary Weimberg Talks About His Filmmaking Life, His Encounters with the Rich and Famous, and His Wise Dog

Episode #7 focuses on Gary Weimberg, the documentary filmmaker who, along with his partner Catherine Ryan, has created many insightful films and television programs, the newest of which is the documentary Soldiers of Conscience, about soldiers grappling with the moral issues of war. Soldiers of Conscience airs on PBS on Oct. 16. But first Gary talks about his encounters with major movie stars, directors and others who have mentored him along his filmmaking path. See photos of Gary and Andy below, under the keywords for this episode.Keywords and links for this episode: Gary Weimberg, Luna Productions, BART (Bay Area Regional Transit), Burt Lancaster, Lawrence Olivier, Francis Ford Coppola, Steven Spielberg, American Zoetrope, “Apocalypse Now,” “One From the Heart,” Anne Goursaud, Akira Kurosawa, Jenny Weyman-Cockell, Malcolm Forbes, hot air balloon, Great Sphinx of Giza, Catherine Ryan, “Maria’s Story,” Julie Christie, “The Double Life of Ernesto Gomez Gomez,” “Soldiers of Conscience,”

Prepared in Santa Cruz, California while Andy is on a “working vacation” there, Episode #3 starts with a visit to the opening night party of the San Francisco International LGBT Film Festival and an amusing encounter with filmmaker Harjant Gill, then to the Roxie Theater and a chat with Barbara Hammer at the premier of her new film “A Horse Is Not A Metaphor” about her recovery from cancer and how guided imagery of horses helped her recover. Next, we’ll talk to Stephen Kent Jusick about the plight of short experimental films, go on a Karaoke adventure with Jack, Valerie and Frank, and close with some ‘deep thoughts’ about responsibility. This episode is 22 minutes long. Please view the photos and video below, under the keywords for this episode. Enjoy! Keywords for this episode: Santa Cruz, California, San Francisco International LGBT Film Festival, Frameline32, Harjant Gill, Washington, DC, “Lot’s Wife,” Barbara Hammer, “A Horse Is Not A Metaphor,” wrinkles, alluvial fans, “Mommie Dearest,” Faye Dunaway, ovarian cancer, guided imagery, horse, Georgia O’Keefe, Stephen Kent Jusick, MIX: The New York Lesbian and Gay Experimental Film/Video Festival, Rotterdam Film Festival, Michael Snow, Michael Wallin, Karaoke, responsibility, Apple. 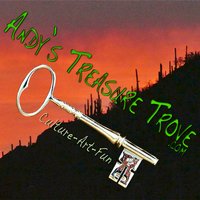 This is my homage to my favorite band, Sparks, and the core of Sparks, brothers Ron &amp; Russell Mael. I speak to Tosh Berman of Tam Tam Books, who wrote a book about a history-making Sparks 21-album concert series in London and who published a book of Sparks song lyrics. I also chat with Eric Theise, an artist, musician and avid and articulate Sparks fan. Laurie Cohen, Director of the Mill Valley Philharmonic, shares her first impressions of Sparks music, and I mention something about each of Sparks' 25 albums from 1972 to the present, and play excerpts from some of my favorite tracks. The episode closes with "Part One" of my conversation with Ron and Russell Mael!There's a great podcast totally dedicated to the music of Sparks called "All You Ever Think About Is Sparks" that can be found at https://sparkspodcast.podbean.com if you'd like an even deeper dive into the music of Sparks. Check it out!

Episode 16 features an interview from 2009 with the noted writer Sarah Schulman, the author of After Dolores, Shimmer, People in Trouble, Rat Bohemia, Stagestruck, and many others. Andy chats with Sarah about, among other things, her keen interest in Wilhelm Reich, her self-admitted graphomania, the film festival she co-directs every year in New York with Jim Hubbard, and the documentary that she and Jim made about the activist organization ACTUP called United in Anger, a History of Act Up. Appearing in some of Sarah’s anecdotes are Woody Allen, Richard Nixon, James Baldwin and Alexander Kerensky. Who was Alexander Kerensky? Listen and find out. Call the listener call-in line to leave a message for Andy and/or his audience: 415-508-4084 When you call, please say “This is [your name] and I’m on Andy’s Treasure Trove!” Listen &amp; Subscribe to this podcast (it’s free!) via iTunes: click HERE Also GooglePlay: click HERE Keywords and links: Sarah Schulman, After Dolores, Shimmer, People in Trouble, Rat Bohemia, Stagestruck, Jim Hubbard, ACT-UP, United in Anger: A History of ACT-UP, Woody Allen, Richard Nixon, James Baldwin, Alexander Kerensky, Petit Versailles, Yaffa Cafe, Wilhelm Reich, Sexpol, sexual politics,The Mass Psychology of Fascism, Orgone, Wilhelm Reich Observatory, William Burroughs, Jeffrey Skoller, Orson Bean, Me And The Orgone, Esalen, To Tell the Truth, Fury On Earth: A Biography Of Wilhelm Reich, Loon Lodge, graphomania, The Child, Diamanda Galas, Nan Goldin, Martin Luther King, Letter from Birmingham Jail, ACT-UP Oral History Project, President Obama, Shopwell, Dark Shadows, Bob &amp; Ray, Bob Elliot, Dr. Andrew Weil. Sarah’s Amazon page: http://www.amazon.com/Sarah-Schulman/e/B000AP923G Her facebook page: http://www.facebook.com/sarah.schulman.56

An interview with Hugh King (also known as "Chopper King.") What I’ve selected from our conversation for this podcast has to do with three distinct parts of Hugh’s life that I find especially interesting: 1) His childhood pyromania; 2) The part Hugh played in the anti-war “GI Coffeehouse Movement” during the Vietnam War in the late 1960’s and 70’s near Fort Dix, New Jersey; and 3) The emergence of Hugh's "Chopper King" character from the TV shows Biker Build-off and Motorcycle Mania. This episode is 35 minutes long.Here's Hugh in 2019 at the controls of a deactivated Titan II missile in its silo outside Tucson Arizona.Please leave a review of my show on iTunes!

This episode of Andy’s Treasure Trove features two great fans of my podcast, Peter and Kath Hart of London. When my family and I were in London a few years ago, we spent a very pleasant day with them, I presented them with some Andy’s Treasure Trove t-shirts, and recorded a short interview with Peter about things that he had mentioned during the day, including stories about his grandfather’s experiences in the British film industry, and the small village of South Ascot where he grew up. He also tells us about some British condiments that you might want to seek out and try. Kath chimes in at the end, and we parted company with warmth in our hearts and some insights into England that only real Brits could provide.Photo by Jack Walsh Keywords and links for Episode 20: It Ain't Half Hot Mum, The Ladykillers, Whiskey Galore, Lavender Hill Mob, London Belongs To Me, In Which We Serve, Austin 12 motorcar, Alan Ladd, South Ascot, Sgt. Adams, Scrumping, Gavin Fairfax Ltd., Walton-on-Thames, Hampton Court Palace, North Wiltshire, Mel McCuddin, Flickr, Marmite, Bovril, Brown Sauce, HP Brown Sauce, Daddies. Recent drawings by Peter Hart, all local to Melksham, Wiltshire:

Episode 14 is a very short episode. We’re going to hear from Orson Welles as he struggles to record some TV commercials. But first I will announce the winner of the contest for the Apple iPod that was based on the name of Manny Roth’s home-made bread from Episode 12. Remember fartbread? The Orson Welles recording was sent to me by a listener who got it from a friend. You may laugh, you may cry, but you’ll never forget Orson’s sonorous intonations about peas, beef and cod. And now, imagine that you are a fly on the wall of a recording studio where filmmaking genius Orson Welles is recording narration for TV commercials, and not having a very easy time of it…

Episode 15 begins with a mammoth roll of thunder recorded here in San Francisco a couple of weeks ago. Then there’s a 2.5 min. interview with Becky Haycox (winner of the recent iPod contest) about the “science quilts” she is making in Ventura, California. After that we talk with Lorenzo Barrar, a 12-year-old jeweler and mycologist who has spent most of his life in a forest near Gualala, California. Lorenzo talks about his mushroom hunting and jewelry-making, and the rewards that close observation of nature provides (11 min.). Then the main event—my interview with singer/songwriter Candace Roberts, along with tuneful excerpts from her album Honeymoon for One (33 min.). The episode closes with some voicemail messages left by listeners on the Andy’s Treasure Trove Listener Call-in Line (415-508-4084). Please add your comments by calling that number and leaving a message for me or for the whole Treasure Trove audience. This is your opportunity for immortality! And please tell your friends about Andy’s Treasure Trove—a new contest is coming soon! Call the listener call-in line to leave a message for Andy and/or his audience: 415-508-4084 When you call, please say “This is [your name] and I’m on Andy’s Treasure Trove!” Listen &amp; Subscribe to this podcast (it’s free!) via iTunes: click HERE Also on GooglePlay: click HERE Explore Candace Roberts and her album Honeymoon for One at www.candaceroberts.com Keywords and links: Thunder, San Francisco, Becky Haycox, science quilts, Ventura, Lorenzo Barrar, mycology, mushrooms, marasmius mushroom, chanterelle mushroom, black trumpet mushroom, death trumpet mushroom, hedgehog mushroom, jewelry-making, antique jewelry, Gualala, CA, Roots Originals, Point Arena, CA, Candace Roberts, Honeymoon for One, Kazakhstan, Walton-on-Thames, England, Sarah Schulman.

© 2020 OwlTail All rights reserved. OwlTail only owns the podcast episode rankings. Copyright of underlying podcast content is owned by the publisher, not OwlTail. Audio is streamed directly from Andy Moore servers. Downloads goes directly to publisher.