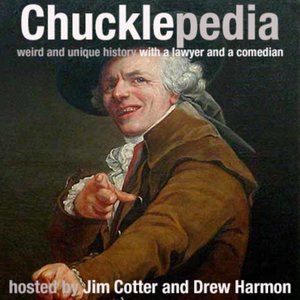 Jim Cotter is a Lawyer and writer born and raised in San Francisco. Drew Harmon is a comedian and former TV Weatherman originally raised in a log cabin in Michigan who migrated west almost a decade ago. Together they use each episode of Chucklepedia to discuss some historical figure, event or oddity, as well as chat about what's happening in their personal lives and careers and their home city of San Francisco.

Listener note: we were trying a new audio recording technique, and the episode has some audio issues that we were not able to remove while mixing. We'll get better! For this episode: while politics in 2020 are mired in scandals that go nowhere, the saga of Budd Dwyer culminated in one of the most horrifyingly public ways possible, and has become immortalized on the internet. Drew and Jim discuss the crimes that led to Dwyer's notoriety and conviction, the choices made by local news organizations as it became public, and the legacy of dirty politics and public displays in the wake of the incident.

In the early 80's and into the Nineties, newspaper funny pages were blessed to have some true visionary cartoonists creating daily strips, and none were stranger, bizarre or hilarious than Gary Larson's "The Far Side." Hear about Larson's early forays into creating the strip, how it became syndicated by more than 1900 papers, and his decision to retire at the age of 44 before he thought the strip might become boring, and how his latest content online has appeared out of nowhere and what may come next.

Hattie McDaniel was a singer, comedian, and the first African American woman to win an Oscar for her role in "Gone With The Wind," but her life was filled with controversy and difficulty. Hear about her rise to one of Hollywood's go-to actresses for a specific kind of role, the criticism she faced for accepting those roles, and how even as she achieved the greatest heights Hollywood had to offer, there were still painful reminders of America's racist legacy waiting for her.

We've seen what happens when people hear that there may be a shortage on toilet paper in 2020, but what about when legitimate food supply lines are cut off in Paris in 1870? Drew and Jim discuss how folks in Paris got hungry, and began to look towards the zoo for a chance to expand their culinary horizons. Rats, dogs, cats, horses, elephants, antelope...it was all on the table. Even more interesting - hear what they still wouldn't eat, and how soon certain types of rodents became high-class fare.

The proud nation of Sealand

Sealand has its own currency, administration, laws, constitution, and even issues passports. They also have less living space than many 1-bedroom apartments. Jim and Drew take you to the picturesque manmade island of Sealand, founded in the mid-20th century and already the site of multiple invasions and battles, and now a proud novelty souvenir hot spot. Hear about the history, the sea battles, and how pirate radio played a role in the founding of one of the world's strangest - and smallest - countries.

In the world of 1980's standup comedy, no comedians were more brash, aggressive, or offensive than Andrew Dice Clay and Sam Kinison. They started as friends but became bitter rivals. In this episode, Jim and Drew dig into how both men became the Kings of the Comedy Store in Los Angeles, what sparked the feud, and what shaped both men's careers as they came to the end of the decade they both reigned supreme in.

The Fountain of Youth

For as long as mankind has been aware they're going to get wrinkled and grey and pass away, we've been looking for a magical solution to keep us young and vibrant. Join Jim and Drew as they examine the legend of the Fountain of Youth, and a few of the most famous attempts to locate it over the centuries. Spoiler alert: the only definite way to avoid aging is to be J-Lo.

The chips that made the Nineties run

Humanity has always been on the hunt for a guilt-free way to eat complete and total garbage. In the late 90s, Olestra was unleashed upon the world, claiming fat-free, guilt-free potato chips, with one minor caveat: "loose stools." In this episode, Jim and Drew dig into the creation of Olestra back in the 1960s for a completely different purpose, and how it made its way onto grocery store shelves, before becoming notorious and causing multimillion dollar lawsuits.

James Joyce is a writer known for his beautiful prose, but he also penned some outstanding filth to his lover and wife Nora, some of which helped to inspire the sexual innuendo that fills the inboxes of everybody on Tinder, Bumble and other dating/sex apps in 2020. Hear about their love affair, Joyce's sexual awakening at the hands (literally) of Nora, and get a personal reading of some of the most remarkably crude sexts ever created by a literary genius.

© 2020 OwlTail All rights reserved. OwlTail only owns the podcast episode rankings. Copyright of underlying podcast content is owned by the publisher, not OwlTail. Audio is streamed directly from Drew Harmon and Jim Cotter servers. Downloads goes directly to publisher.