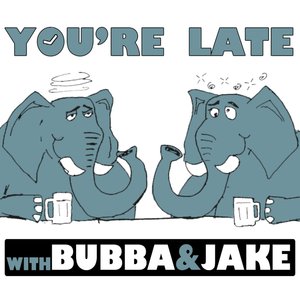 You're Late w/ Bubba and Jake

Ever sit down and say, “Hey, I just want to have a conversation today?” Well, we did and this is our attempt at it. Why describe something, when you can just listen? 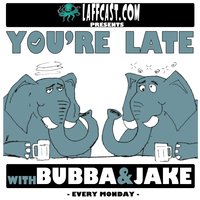 Owner and Proprieter of Laffcast studios drops by for congratulations on his recent engagement and he gives us his origin story!

We're back and we start by reliving an amazing moment: Bubba's proposal to Meg! In this episode we also talk about confrontation, road rage, and we're visited by the lovely Nick Kupsey!

On this Valentine's Day edition of You're Late, our better halves, Shell and Meg, stop by for a fun convo.

This week we get a phone call from TODD GLASS! Then we dive into a play by play of Hulk Hogan's sex tape, putting pressure on ourselves, MORE ghost stories. We also talk about childhood regrets and fighting with best friends.

This week we have a fun conversation with the hilarious Pat House about comedy and the afterlife. Pat can be found on twitter @BohemianPatsody. His album "Biggest Thing" is available on iTunes and Amazon. Check it out!

After a nice break, Bubba and Jake are back to play catch up and talk about what we hope to accomplish in the upcoming year.

In this episode Bubba talks about his plans on going to the Comedy Cellar while he is away for a wedding. Jake makes his comedy New Year's Resolutions, and we talk about gun violence and gun control.

This week we talk about a new best friend in Bubba's life, Jake recaps his sister's destination wedding, and Bubba explains what it's like to break up with a band.

One of our favorite people and Philly's Phunniest winner, Chip Chantry, stops by to talk about what it's like to write for a TV show, stand up, teaching, and marathons. Follow him on Twitter @ChipChantry. Recorded at Laffcast Studios.

© 2020 OwlTail All rights reserved. OwlTail only owns the podcast episode rankings. Copyright of underlying podcast content is owned by the publisher, not OwlTail. Audio is streamed directly from You're Late w/ Bubba and Jake servers. Downloads goes directly to publisher.