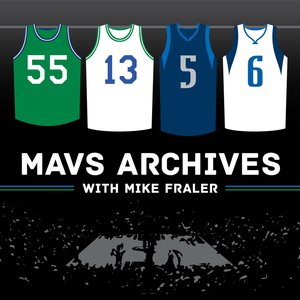 Mavs Archives (formerly known as Forgotten Maverick) is a new Mavs history podcast dedicated to celebrating and sharing memories of nearly 40 years of Mavs basketball. Whether it’s hearing directly from former players or just reminiscing with guests about their own Mavs memories, this podcast offers MFFLs a combination of firsthand recollections of moments throughout franchise history and plenty of nostalgia for all.

Joining the podcast for this episode is Mavericks TV analyst Jeff "Skin" Wade. Skin has been a part of the Mavericks television broadcast team since the 2008/2009 NBA season and I'm excited to share this conversation with you. Among the items discussed were his beginnings as a Maverick fan, his journey to becoming part of television broadcast team, his passion for his work, and more!

Former Mavs Equipment Manager/Assistant Strength Coach, Chad Lewis called into the show for this episode. Chad reminisces on his path to getting his foot in the door in the NBA as a basketball operations employee, and goes into great detail about his time in Dallas. From 1996-2002, Chad was one of the main guys behind the scenes, working directly with the players, managing all the equipment, and traveling with the team.Thanks for listening to Mavs Archives, part of the Dallas Mavericks Podcast Network.

This episode was quite a thrill for me, as Jason "The JET" Terry joined me to talk about his time with the Mavs, and even shared some details about other points of his basketball journey. I truly enjoyed reminiscing with Jet about his play in the 2005 playoffs, the 2006 NBA Finals run, and of course, the 2011 Championship run. JET was gracious enough to give us Mavs fans over an hour of his time, and did not disappoint! Thanks for listening, I hope all MFFLs enjoy this episode.

Former Mav Chris Wright joins "Mavs Archives" for this episode. During nearly an hour long conversation, Chris looks back on his basketball journey from high school to the pros, taking an in depth look at his time with the Mavs, his experience as the first known NBA player to play with Multiple Sclerosis, his international career, and more. March is Multiple Sclerosis Awareness Month, and Chris shares his own inspiring story on the impact MS has had on his life and career. Thank you for listening to "Mavs Archives" - part of The Dallas Mavericks Podcast Network.

In this episode we were joined by former Mav, Walt Williams. Despite only playing one season in Dallas, Walt definitely cemented his place in Mavericks playoff history during their sensational run to the 2003 Western Conference Finals. By providing clutch shooting and veteran leadership, there's no way the Mavs advance that far without "The Wizard."

Former Mav Randy White joins us for this episode. White, the 8th overall selection in the 1989 NBA Draft, came into Dallas with some lofty expectations and comparions to NBA legend and Hall of Famer, Karl Malone. In this episode, White talks about playing under the shadow of Malone, his experiences playing for multiple coaches during his time with the Mavs, some overseas memories, and more. Thanks for listening to Mavs Archives, part of the Dallas Mavericks Podcast Network. #MFFL

Samaki Walker joined the podcast to talk about his time in Dallas and his NBA career. Walker experienced some NBA memorable moments during his career and I'm excited to share our conversation.

This episode features former Mav Greg Buckner. Buckner suited up for the Mavs for a total of 4 seasons across two different stints. He was a key rotation player in the early 2000s as well as on the 2007 67 regular season win team. In addition to playing for the Mavs, Buckner has also served as a studio analyst on Mavericks broadcasts in recent seasons. Thanks for listening, we hope you enjoy this new episode of "Mavs Archives", part of the Dallas Mavericks Podcast Network.

Scott Lloyd played for the Mavs for just over 2 seasons in the early 80s and was one of the original Mavs in their inaugural season.

Uwe Blab joins us for this episode to talk about his basketball career, beginning in Germany as a teenager through his time in high school in Illinois, to college at Indiana University, and through his NBA career.

This episode features former Mav and NBA Hall of Famer, Alex English. One of only 4 NBA Hall of Fame players to have spent time with the Mavericks, English played his final season with the Mavs in 1991. English led the NBA in scoring in 1983, was an 8 time All Star, and scored more points than any other player in the 1980s. Thanks for listening! #MFFL

In this episode we catch up with former Maverick Tony Delk. A 1996 NCAA Champion and 10 year NBA veteran, Tony and I touched on a variety of subjects including his senior year NBA talent heavy college team, his rookie year, being present at the Latrell Sprewell incident in 1997, playing with White Chocolate in Sacramento, his time in Dallas, and more.

Looking Back at the Mavs vs Kings Rivalry with TJ Macias

This episode of Mavs Archives features TJ Macias, a writer for MavsSI.com, SacTown Royalty, and lifelong Kings fan. TJ and I shared our memories of some of those epic Mavs Kings games and playoff series between 2002-2004, the Chris Webber injury in the 2003 series vs the Mavs, Peja Stojakovic's Mavs' stint, and more. Thanks for listening!

In this episode we catch up with former Maverick Rick Hughes. In addition to a successful college and international career, Rick played for the Mavs for 21 games in the 1999-2000 NBA Season. Despite a short stint in the NBA, Rick had a memorable experience, spending the preseason under the tutelage of Karl Malone and John Stockon playing for the Jazz before moving onto the Mavericks where he played with the young trio of Michael Finley, Dirk Nowitzki, and Steve Nash.

Rawle Marshall, a rookie on the 2006 Mavericks team joined me for this episode. During a mid-season stretch, where the team was dealing with various injuries, Rawle started 9 consecutive games for the Mavs.

In this episode, former Mav Nick Fazekas joined us to talk about his basketball career , including his brief stint as a Maverick 10 years ago. While he only played 4 games with the Mavericks, Nick definitely learned the business side of the NBA and shared some of the behind the scenes details of his life as an NBA player.

In this episode I caught up with Moe Ager, a 2006 first round draft pick of the Mavericks. Moe and I discussed his playing days at Michigan State, getting drafted to the Mavericks, facing the warriors in the 2007 playoffs, getting traded to New Jersey, playing overseas, his time with Timberwolves, and his successful music career.

Former Mav Mike Iuzzolino joins the podcast for this episode. Mike played for the Mavs from 1991-1993, before playing 10 more years of professional basketball in the CBA and overseas. Mike was also one of the Mavericks in the original "NBA Jam" arcade game, one of the most iconic video games of all time.

Joining us for this episode is former Maverick, Martin Müürsepp. Martin is the only NBA player ever from Estonia and played the latter half of his rookie year and the following year with the Mavericks in the 1997 and 1998 seasons. After his NBA stint, Martin played professionally overseas for several more seasons.

© 2020 OwlTail All rights reserved. OwlTail only owns the podcast episode rankings. Copyright of underlying podcast content is owned by the publisher, not OwlTail. Audio is streamed directly from Dallas Mavericks servers. Downloads goes directly to publisher.