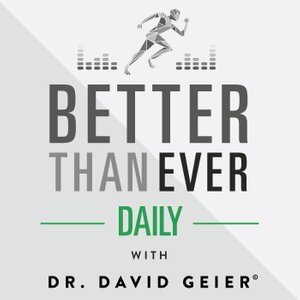 Better Than Ever Daily

Each day, Dr. David Geier will bring you the latest medical research and information you need to feel better and live longer. He shares new studies, tips or guidelines that can improve your health and the health of your family. Each episode will cover topics like nutrition, exercise, aging, fitness, sleep, mental health, children’s health, women’s health, and much, much more. 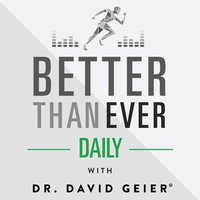 I discussed recently how less than one in five American adults were found to have excellent heart health, according to a new study from the American Heart Association. It turns out that our children aren’t doing much better. The study, published in the journal Circulation, shows that fewer than 30 percent of children and adolescents had high scores for cardiovascular health. These numbers are worrisome, as children with poor cardiovascular health tend to maintain that poor heart health into adulthood. Their risk of future clinical cardiovascular disease events, like heart attacks and strokes, is much higher over the next 30 years than those children who maintain excellent heart health. The post 230. Most American kids have poor heart health appeared first on Dr. David Geier - Feel and Perform Better Than Ever.

A new study shows that moderate exercise is safe during pregnancy, and it can help prevent childhood obesity and diabetes. In the study, published in the journal PLoS ONE, Brazilian researchers collected data on leisure-time physical activity for pregnant volunteers. Each woman reported her exercise during the second and third trimesters of pregnancy. The researchers weighed the women throughout the study and weighed the babies at birth. They found that getting at least 150 minutes of exercise per week, or roughly 20 minutes each day, was associated with a decrease in the baby’s birth weight, which reduces the risk of childhood obesity and diabetes, without raising the risk of the baby being born with too little weight for their gestational age. The post 229. Daily exercise during pregnancy reduces children’s risk of obesity and diabetes appeared first on Dr. David Geier - Feel and Perform Better Than Ever.

Less than one in five American adults is in excellent heart health, according to a new study published in Circulation, the journal of the American Heart Association. Researchers used the new Life’s Essential 8 checklist, which assesses diet, physical activity, nicotine exposure, sleep duration, body mass index, blood lipids, blood glucose, and blood pressure. They found that 80 percent of adults and children have either moderate or low cardiovascular health. Women scored slightly higher than men, with both men and women having low scores in diet, physical activity, and body mass index. The post 228. Very few American adults have excellent heart health appeared first on Dr. David Geier - Feel and Perform Better Than Ever.

Colorectal cancer is the third most common cancer and second deadliest cancer in the U.S., causing over 50,000 deaths each year. A new study shows that the typical American diet might be to blame. In a new study published in the journal Gastroenterology, researchers from Brigham and Women’s Hospital in Boston found that diets consisting mainly of red meats, processed meats, sugar, and refined carbs were associated with colorectal tumors containing elevated amounts of pks+ E. coli bacteria. The scientists believe this bacteria increases the cancer-inducing activity of an intestinal compound called colibactin. Plus, these typical Western diets have been shown to cause inflammation in the gut and throughout the body, which are also precursors to colorectal tumors. The post 227. Typical American diet linked to increased risk of colorectal cancer appeared first on Dr. David Geier - Feel and Perform Better Than Ever.

226. Early adulthood is now when people gain the most weight

More people are putting on weight than ever. It now appears that much of this extra weight comes early in adulthood. In a new study published in the Journal of Obesity, researchers at Brigham Young University collected data on 10-year weight change patterns from almost 14,000 American adults from the National Health and Nutrition Examination Survey. More than half of Americans gained 5 percent or more body weight during a 10-year period. More than one-third of Americans gained 10 percent or more body weight. And nearly one-fifth gained 20 percent or more body weight. Surprisingly, a large percentage of those extra pounds were added in early adulthood. The average American gained about 17.6 pounds from their mid-20s to mid-30s. By their fifties and sixties, though, the average weight gain was less than five pounds. The post 226. Early adulthood is now when people gain the most weight appeared first on Dr. David Geier - Feel and Perform Better Than Ever.

225. Pickleball is a good source of exercise

Pickleball has exploded as a sport in recent years. It initially attracted baby boomers with injuries or less ability to run as they got older, but younger people are also starting to flock to the sport. Two recent studies showed that despite the smaller courts used in tennis, pickleball can provide the same benefits as traditional exercise. One study out of Western State Colorado University found that participants had heart rates of 108 beats per minute and burned over 350 calories per match, which classifies as a moderate intensity workout. The pickleball players showed significant improvements in LDL and HDL cholesterol, systolic and diastolic blood pressure, and maximal oxygen uptake. Another study performed at Brigham Young University found that playing doubles pickleball led to higher heart rates and calorie expenditure than walking for exercise. The post 225. Pickleball is a good source of exercise appeared first on Dr. David Geier - Feel and Perform Better Than Ever.

A new study suggests that children who spend time with dogs have lower stress. In the study, published in the journal PLOS ONE, researchers examined the levels of cortisol, a stress hormone, in children before and after spending 20 minutes with a trained dog twice a week for four weeks. The researchers compared the results to children who didn’t spend time with dogs and children who instead practiced meditation. The children who spent time with dogs showed significantly lower cortisol levels after their interactions with dogs than either the control or meditation group. Other benefits seen in children who play with well-behaved dogs include self-confidence, a sense of belonging and security, increased social skills, and fewer behavioral issues. The post 224. Dogs help decrease stress in children appeared first on Dr. David Geier - Feel and Perform Better Than Ever.

223. Decrease light in your bedroom to improve your health

How light or dark your bedroom is doesn’t just affect the quality of your sleep. It could influence several health problems, according to a new study published in the journal Sleep. Researchers at Northwestern’s Center for Circadian and Sleep Medicine in Chicago studied over 550 participants between the ages of 63 and 84. The participants wore devices that measured the amount of light in their bedrooms for more than a week. They found that older adults who used night lights, or left their TVs, smartphones or tablets on in the room were more likely to be obese, and have high blood pressure and diabetes, compared with adults who were not exposed to any light during the night. To improve your sleep – and your health – keep your bedroom as dark as possible. If you need a nightlight, try to use a red or amber light, and keep it close to the floor, away from your bed. If you can’t control outside light that gets in the room, try blackout curtains or wearing an eye mask. The post 223. Decrease light in your bedroom to improve your health appeared first on Dr. David Geier - Feel and Perform Better Than Ever.

222. Ability to balance on one leg predicts longevity

If you can’t balance on one leg for 10 seconds, you might have a greater risk of dying in the next 10 years, according to a new study published in the British Journal of Sports Medicine. Brazilian researchers tested over 1,700 adults between the ages of 51 and 75. The participants were asked to stand on one leg for 10 seconds without holding onto anything for support. Roughly one of every five participants could not balance on one leg for 10 seconds. After factoring in age, weight, medical history and more, the researchers concluded the risk of death within 10 years was almost two times higher in participants who failed the balance test versus those who passed it. This is a simple test you can do at home, and you can improve your balance with simple measures like standing on one leg while brushing your teeth. The post 222. Ability to balance on one leg predicts longevity appeared first on Dr. David Geier - Feel and Perform Better Than Ever.