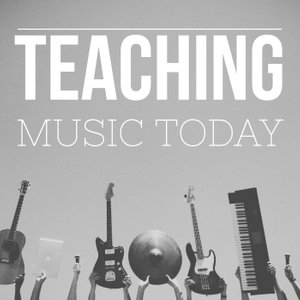 Welcome to the Teaching Music Today Podcast. This podcast was created by music educator Adam Calus. The podcast challenges music education practices and reflects on many different controversial issues of the field today. It means to serve to start an important dialogue that needs to be had about the current state of music education in Western Culture. Currently, there is a disconnect between how music is being taught in schools at all levels (K-12 and College/University programs) and how music currently exists in today's society. In order for current music students to be prepared for the music industry today, we need to put a firm halt to the use of practices from yesterday. In addition to challenging what exists, this podcast will also serve to create templates for change, innovation, and strategies that teachers at any point in their career can use to reflect on and add to their practice.

Teaching Music Today S2, Episode 1. "What I Have Learned from My Students So Far." ft. Adam Calus

This is a part of an ongoing blog that I have and will be an outlet for me to reflect on what my students have taught me in my career of being a music teacher. Reflection is one of the most powerful forms of professional development we as music educators can engage with. Taking the time to think about how an interaction with a student, class, week, school year, etc. have been going and what you can do to maybe change things to make it better for your students is an important part of personal growth as an educator. This is going to be one of the ways I do that. As well as this, I will try to offer some inspiration for other music teachers for things they can gain from their students while engaging with them in the music learning process. My students have taught me everything that I know. Can I say that? Should I say that? It is an interesting way of looking at how we develop as teachers because if you think about it, without witnessing your students’ learning, you would have no idea if you were being effective or not. Right? When a student achieves something we have structured for them, we know that structure can be successful. Over time those successes add up. If we are aware of them and compile them the right way, we can build many skills as a teacher. The same can be said for when a student doesn’t achieve at something we structure for them. We either learn that the entire structure for what we did doesn’t work or that pieces of it work and pieces don’t. It is all about reflecting how things went and learning from it. At the same time your students are learning music, you are learning how to be a better music teacher. The two processes feed off of and inform one another.

In this episode of teaching music today, the topic of discussion is still the current state of Music Education. The first two episodes we heard from teachers about what music education is like today and now we are hearing the perspective of the student. For teachers watching this, talking to your students about their learning experience is one of the most valuable pieces of advice I could offer. Take the time to discuss with your students about what it is like for them in your class, what it is like for them to learn music, what music they love, and anything else that might help you better serve them. It is important to note that this conversation only works if you as the teacher are willing to reflect on what is shared by your students. Reflect on how what they said can be taken into account when bettering your practice as an educator. Students in this episode discuss what they value as meaningful or have experienced as meaningful in their music education experience. As well as this, they discuss how they view music in society, music they like, as well as other perspectives. It should be noted that this conversation was not planned and the episode was not edited. I tried to keep this episode as organic as possible with regards to the conversation to serve as an example of the types of in depth conversations that students can have about their learning with their teacher.

In this episode, we continue our conversation on the current state of music education in Western Culture. Featured in this episode we have Duane Leatherberry Jr., teacher at Charlestown High School, who discusses his background as an educator, music student, music business person, and music consumer. Highlights from the show include: -How music is situated in today's society compared to how it is being taught.-How connecting with your students is one of the most important parts of being an educator and can lead to better music making/learning in your classrooms.-The importance of jamming.-Attributes of the working musician of today. The episode also includes stories from students Ralsh Mendoza (https://www.instagram.com/ralshmendoza/) and Emmanuel Ademodi. Both students come different cultures and have only experienced music education of Western Culture at Charlestown High School. They share their stories of being a part of the program and what being a musician means to them.

In this first episode, Adam Calus goes on to talk about a number of current disconnects that exist between music education and the way music exists in society today. One of those main disconnects is the current working musician in today's society. Current music education practices are based off of old structures implemented in school music programs to prepare school-age children for conservatory training and traditional music performance. This was because when these structures were created, this was reflective of the working musician in today's society. Many jobs that were available were those of traditional music. Today's working musician looks much different than that of the past. The working musician of today is a business minded individual who is compensated for a number things that are often of the individual's own entrepreneurial design. Musicians of today are recording in studios, writing songs, getting revenue from streaming services, making music for film, creating nonexclusive music for music libraries, performing, selling merchandise, and the list goes on and on and on and on and on...Even though this is the case, we still have many music programs across the nation still filling every second of their classes with hyper structured ensemble rehearsal in order to achieve a high ranking at any number of festivals, ultimately further perpetuating their program's only form of success. If we are going to have music students ready for today's industry we have to start making programming more relevant to the existence of music today. Adam Calus is a Music Educator originally from Fowlerville, Michigan. Adam is  graduate of Berklee College of Music from the Film Scoring program and also studied a number of Music Education courses while at the college. Shortly through his music education studies at the college he abandoned the program because he felt that while he was gaining new knowledge from the program, he was not at all able to apply it to the teaching he was currently doing in schools and privately. After graduating Berklee, Adam went on to revive a music program at a Boston Public School called Charlestown High School. Since forming the program he has been awarded a Berklee BUSA award for his public service, has had his program recognized by the district, featured at the MMEA Music Education IN-Ovation Council, and awarded a number of honors and grants from private organizations throughout the nation. The success of his program comes from his passion, dedication and love for his craft, and the connections he builds between his practice and the relevance of music in today's world--how it is consumed, created, and shared. Adam is currently the Music Director and Visual /Performing Arts Team Leader at Charlestown High School, CEO of a nonprofit rebuilding music programs in the US called Music for Schools Inc., and is currently studying at Boston Conservatory at Berklee. Some of the readings that apply to this episode include:https://www.amazon.com/How-Popular-Musicians-Learn-Education/dp/0754632261https://www.amazon.com/Discourse-Disjuncture-between-Higher-Education/dp/1137561955/ref=sr_1_fkmrnull_1?keywords=discourse+and+disjuncture+arts&amp;qid=1555944354&amp;s=books&amp;sr=1-1-fkmrnullhttps://www.amazon.com/s?k=remixing+the+classroom&amp;hvadid=241926270617&amp;hvdev=c&amp;hvlocphy=9001991&amp;hvnetw=g&amp;hvpos=1t1&amp;

© 2020 OwlTail All rights reserved. OwlTail only owns the podcast episode rankings. Copyright of underlying podcast content is owned by the publisher, not OwlTail. Audio is streamed directly from Adam Calus servers. Downloads goes directly to publisher.