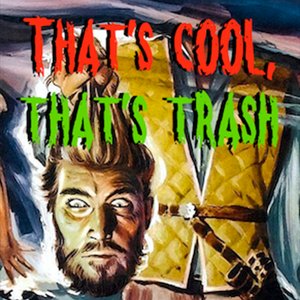 That's Cool, That's Trash! is a psychotronic podcast that covers outré, cult, and trash movies that are usually found free online. Host Matt Howell is joined by guests to discuss movies w/ sound clips and Final Judgement: is it cool or is it trash?

Matt is joined by Matt Mair Lowery, writer of Dark Horse Comics' LIFEFORMED, and Jason Farrell to talk about Matt's 2nd volume of his YA alien invasion opus and all things comics...and Fred Olen Ray's 1980 cinematic train wreck ALIEN DEAD, where a houseboat in a Florida Swamp meets a meteorite that creates flesh-eating zombies...that look like last-minute Halloween costumes. We've said it before and we'll say it again: ED WOOD GOT SCREWED

Matt's love affair with the filmography of Renee Harmon continues. Joe and Jacob are back to talk about this 1986 shot-on-video movie that's got mad science, gaslighting, pool parties, a hooded killer, and a ghost. Directed by Felix Girard.

A Filipino-made horror-fantasy movie about a man who is chosen by his dead uncle to battle the forces of evil. He fights a being called "The Prince of Magic," who shoots rays from his hands, makes heads spin around &amp; hypnotizes people. He finally faces Satan himself and engages him in a battle of magic.

Matt &amp; Scott chat about a flick that should have been a '70s TV movie. It stars Tony Curtis &amp; Susan Strasberg and features music by Lalo Schifrin. Directed by William "Abby" Girdler. 'A psychic's girlfriend finds out that a lump on her back is a growing reincarnation of a 400 year-old demonic Native American spirit.'

Matt concludes his tour of Blood Island by visiting 2 Romero/Ashley movies produced after the series proper ended: The Beast of the Yellow Night and The Twilight People.

TCTT goes to the movies! Joined by JB from The Broken Plane Podcast, we ventured out to Joy Cinema to see A*P*E, a 3-D quickie aimed at beating Dino De Laurentiis' big-budget and much-hyped remake of KING KONG to the screen. Shot in South Korea on a budget of $23,000 in 14 days, this one doesn't quite measure up to the Jeff Bridges one, but does that one have King Kong flipping the camera off? No, I didn't think so. How many 3-D snakes are thrown at and knock over the camera? Zero? Hard pass. JB &amp; TK: https://thebrokenplanepodcast.blogspot.com/

Adam &amp; Kyle return to review DRAGON HUNT, the canuxploitation sequel to TWIN DRAGON ENCOUNTER, sees the villain Jake return w/ a new metal hand &amp; an armada of mercenaries. He wants the heads of Mick &amp; Marty McNamara for revenge against losing battle (and his hand) to them in the first one. Ninjas, poachers, beast-masters...oh, my!

The last Halloween mix of the TCTT podcast series. We hope you enjoy it and share it with your friends. Happy Halloween!!!

Kyle, Scott, and Matt are joined by another Scott to discuss this Indonesian rip-off of The Terminator. Body counts soar, breasts are bared.

Matt is joined by the the Brothers Kincher (Joe &amp; Travis) to talk about this Chicago-shot obscurity. We had some cocktails.

Matt is joined by Kyle and Matt Mair Lowery, author of the new Dark Horse comic Lifeformed: Cleo Makes Contact. We talk comics a bit and then dive into our Christmas film: ELVES, starring Dan Haggerty. If you like your Christmas movies to have Nazis and upright vermin, this is the film for you.

Matt &amp; Joe give the gift that keeps on giving: A Christmas short riffed for your Yuletide pleasure. Thanks to all of our wonderful listeners out there. We thank you for your support. Happy holidays to you and we hope you have a wonderful new year.

We wanted to participate in the Vincent Price Blogathon this year, so we picked a pulpy sci-fi horror movie from Amicus that was new to us and talked about it with guests Rob Hafferman and Devin Bruce. Vincent is joined by Peter Cushing and Christopher Lee, sort of, to tell an odd little tale about body-part farming and composite people in the highest levels of government. Devin sings! https://apocalypsekow.com/moo/ Rob paints! https://roberthafferman.com/

Finally revealed! Here's why TCTT has been on hiatus since X-mas. The experiment that broke Matt's brain: watching a 3 Supermen movie a day...

Matt is joined by regular guest Jacob Balcom and his cousin Seth Garon returns to talk about DEMON COP, the Blood Meridian or The Sound and the Fury of psychotronic auteur films. Demon Cop seems to be the tragic story of a widower who becomes the host of a demon of retribution &amp; changes into a beast with the moon to stalk the members of Denver/Aurora Hills gangs. A virtually impenetrable web of exposition, non-sequitur scenes, and kaleidoscopic plot.