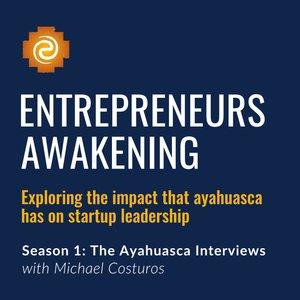 Learn the impact that ayahuasca retreats that include prep and integration are having on founders, CEO's and investors. Season one consists of interviews with successful entrepreneurs who vulnerably share the personal and professional lessons learned from their ayahuasca experiences. You will learn actionable insights that you can apply to your life and business right away. 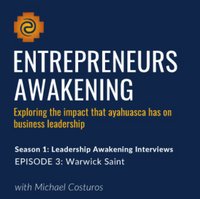 From the outside looking in, Saint had it made. He was making 7 figures, flying around the world doing what he loved most. By all accounts, he had created the life of his dreams. Best of all he had a loving wife and a 2-year-old son who he truly adored. And Yet his gut was telling him that he was off track. He knew something was off but had no idea what or why. Who’s Warwick Saint? He’s the guy Nike hires to shoot the advertising campaign for their new Lebron James shoe. He’s the guy Jennifer Lopez hired to shoot her full album package. (He’s crazy good at what he does. You can check out his work on https://thesaintstudio.com, it’s ridiculous.) Saint joined my first ayahuasca mastermind back in 2012, hoping that ayahuasca and The mastermind support would provide the perspective and insights he sought. To his surprise, his first night with ayahuasca was, quote, “the worst experience of my life.” It left him feeling shell shocked and with no discernable insights. Little did he know that that night was the first step on an epic journey that would utterly transform every aspect of his life, for the better, forever. Only now, six years later has the journey that started that night come to completion. In this interview, Saint shares how to turn a mid-life crisis into a mid-life awakening and how to source power from your truth to stay the course even when everyone believes you are crazy. Is he crazy? Let’s dive in. 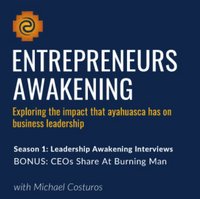 S1E5: Three CEO's Share the Impact Ayahuasca had on Their Leadership

Listening to this special entrepreneurs awakening podcast episode recorded live at Burning Man, will inspire you to follow your truth. Omi and Henrik have created venture-funded companies worth north of one hundred million dollars. Ali has created an impact focused lifestyle business on track to do more than a million in revenue per year. What makes their business success unique is that each of them credit the impact ayahuasca and meditation had on their mindset as significant factors. You will also hear from Paul Austin co-founder of TheThirdWave.co. Paul will share what the Third Wave of psychedelics is and why as participants, it’s important for us to understand our role in it. This was recorded live in the Camp Mystic Theater at Burning Man 2018. Let's dive in! 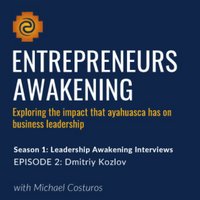 Dmitriy was already aligned with his mission and purpose before experiencing ayahuasca which is why he was surprised and humbled by what ayahuasca taught him about his true mission and purpose. Which has me wonder, does he still want to be a billionaire by age 35? Let’s find out. 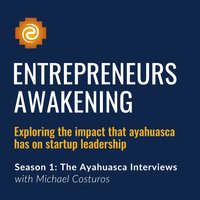 An atheist’s first ayahuasca experience causes a spiritual awakening that liberates him and transforms his business. Through Y-Combinator he launched his most recent company, AirHelp, which during the first 4 years averaged 200% year over year growth. But there was a problem. Henrik Zillmer went from comedian to Lieutenant in the Danish army, Only to reach a dead end as a successful corporate executive. Following his call to adventure at 28, he left the corporate world behind and began his journey as a serial entrepreneur. Airhelp was a big success but the problem was that Henrik’s leadership style mirrored what he had learned in the military— To command, control and win at any cost. He relied on tough criticism as a way to motivate his employees which worked, up to a point. At around 250 employees, the collateral damage of Henrik’s anger and impatience was threatening the business. On top of that, though he was living his dream as a successful founder/CEO, he actually wasn’t happy. In this episode, you’ll learn how he applied his ayahuasca insights to transform his company culture and personal happiness in a matter of months. Let's dive in!

© 2020 OwlTail All rights reserved. OwlTail only owns the podcast episode rankings. Copyright of underlying podcast content is owned by the publisher, not OwlTail. Audio is streamed directly from Michael Costuros servers. Downloads goes directly to publisher.