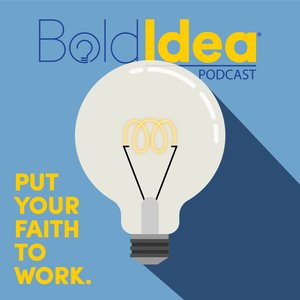 BoldIdea Podcast - Put your faith to work and bring your bold idea to life.

The BoldIdea® Podcast features interviews, ideas, and inspiration to help you take bold steps to bring your bold idea to life. Put your faith to work.

062 Brian Bird on the power of a redemptive story

Is there a place for Christians in popular art and culture? There most certainly is says Brian Bird, a successful Hollywood film and television producer. Brian doesn’t see a separation between the art of the people and the art of the church, just millions of men and women created in the image of God using their talent to share stories of redemption in search of the greatest redemption of all.

Are you constantly getting knocked off course in the pursuit of your BoldIdea? Do you get distracted easily? Have a long todo list that just never seems to get done? Leary Gates and Armin Assadi share five tools to help you beat distraction and get to work on your BoldIdea.

091 Phil Zahn on moving from bondage to bonding

Phil Zahn is a bit of a mystery. He doesn’t like to name who he works for, where he’s traveling, or the people that he’s talking to. And he does this in service to the people that he knows God loves, protecting their identities and their stories. But he will absolutely talk about the Jesus that he knows, and he does so on the podcast with Leary and Armin today.

083 Dan Chrystal on the lost art of relationship

Dan Chrystal has uprooted his life and built himself a new community again and again and again, all while serving in the church and running a business (or three!). He knows that building relationships with other people is a lost art -- and he’s written a new book to help us all navigate the process. He chats with Leary and Armin on the podcast today about how we were created to be in relationships together.

067 Adam Davis on pain and transparency

Former police officer Adam Davis wants everyone to redeem the pain in their life through being transparent with themselves, God, and others. As someone who has been sexually abused, Adam knows that radical transparency can bring healing to even the deepest of wounds. He shares his story with Leary and Armin, and encourages others to lay down their pain for Christ’s love.

066 Whitney Johnson on leading with disruption

Whitney Johnson knows that personal disruption is the best way to level-up in your own career trajectory. She jumped from earning a degree in music to becoming a sought-after equity analyst on Wall Street and knows that the experience helped her to jumpstart a new learning curve of her own. She chats about her experience with Leary and Armin and shares some tips for how to invite disruption in your own life in order to grow.

Amanda Carroll found herself married, a mother of three, doing a morning show in Washington, D.C., and living what looked like the life of a perfect suburban Christian woman. That all changed when her husband came home from a business trip to say that he was leaving her and their three kids---the youngest of which was only 8 weeks old. Amanda had to start her life over, and now she strives to help other single moms do the same.

John Turnipseed used to lead a gang of 300 or more in Minneapolis, a gang with a reputation big enough and bad enough to have the National Guard called in against them. Now, he’s living a completely different story. The campus pastor and executive vice president at Urban Ventures, John takes his passion for fathering and uses it to minister to men and their families.

042 Ward Brehm on how God changed a jerk

Ward Brehm says he was "a jerk" before God changed his heart and a life. A retired successful businessman, Ward found the love of Christ on a trip to Africa and has never been the same since. He talks with Leary and Armin about how God changed a jerk, as well as the guiding principles he has used to live his life since.

087 Aaron Walker on what makes a great mentor

Aaron Walker spent decades as a successful businessman constantly reaching for the next big thing. When a horrendous car accident jolted him out of his reverie of success, he pivoted his life to be one about building significance, and he’s spent years encouraging other men in their own journey through mentorship.

095 Patrick Morley on being a Christian man

Patrick Morley founded the Man in the Mirror ministry nearly 30 years ago and since has helped over 35,000 churches minister to more than twelve million men around the globe. He joins Leary and Armin today to discuss the issues that plague modern men (spoiler: they’re the same as they’ve always been) and the three things he thinks every man needs in order to be growing in his walk with the Lord.

071 Gigi Marvin on the time to act

Gigi Marvin is an expert at taking action. A professional hockey player and three-time Olympic medalist, Gigi helped Team USA win gold earlier this year at the 2018 Olympics. But that rise to the top almost didn’t happen. Just months before the games, Gigi and her teammates chose to take a stand and demand action in regards to the state of women’s hockey across the country. She chats with Leary and Armin about the courage it took, and why acting was the only thing they could do.

092 Elizabeth Adams on bringing your best in demanding life stages

Elizabeth Adams found herself squeezed between adult children and an aging mother with cancer -- all of whom needed a lot of her attention and care. And this was all while she was going through seminary training. When she fell asleep in a fast-food drive thru, she realized she needed to be taking better care of herself, too. Elizabeth shares her journey with Leary and Armin on the podcast today.

090 The hidden cost of an idea

Some of us are idea factories. We can’t stop having ideas. But with every idea comes a tax -- or two, or more -- and if we ignore that tax, we have to account for it later. And that usually comes at a pretty high price.

044 Wes Yoder on cultivating a life of curiosity

Can curiosity be cultivated? Wes Yoder thinks it can. Raised in an Amish and Mennonite community, it wasn’t until Wes was in his twenties that he realized that he could learn anything he wanted if he pointed his curiosity in the right direction. Now a successful author and founder of a prominent faith-based company, Wes encourages others to connect with their God-given curiosity.

078 Kelly Resendez on your voice as a masterpiece

Kelly Resendez knows what it’s like to be successful on the outside but unsatisfied on the inside.In 2002, Kelly was a mortgage lender who had it all: a high six-figure salary, the beach house, the mansion. But she felt joyless. When three family tragedies struck in close succession, she realized that she needed to change her definition of success and chase what God had for her.

032 Kathleen Cooke on the influence of relationships

Kathleen Cooke is someone who is hard to keep up with---she’s an actress, author, speaker, and mentor seeking to connect Christians within Hollywood and beyond. Kathleen chats with Leary and Armin about how important the influence of relationships is in our lives as Christians, whether we’re seeking a new job or trying to carve out space for daily quiet time.

Don Barden has a different model of leadership: He wants the people following him to leave him. It sounds different, and that’s because it is. Don wants to give everyone a chance to learn who they are and what they contribute to the world, and then he wants to equip them to go and serve God in their one unique capacity. Don chats with Leary and Armin about this model, reminding us all the servant leadership is hard, but it’s worth working toward.

Dr. Phil Carson experienced severe stress-related health issues that led him to seek a more natural cure and livelihood. After losing the business he had built during the 2009 recession, Dr. Carson had to learn to trust God like he never had before --- and he discusses this new perspective on trusting God in business failure with Leary and Armin on the podcast this week.

069 Why you need a supermodel

Leary and Armin have had a lot of great guests on the show, people whose lives they admire and seek to emulate. In this episode, they’re sharing the guests they use as reference models to level up in their own lives.