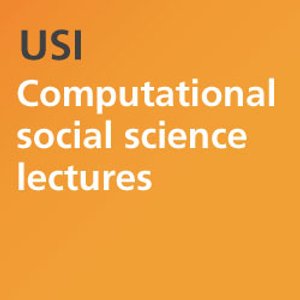 The emergence of a computational social science: opportunities and barriers (David Lazer)

An increasing fraction of human interactions are digitally captured. These digital breadcrumbs create enormous opportunities for ground breaking social science, to look at societal phenomena at a scale and granularity heretofore impossible. This talk will discuss what some of the potential scientific opportunities are, as well the potential barriers to the emergence of a “computational social science".

In The Clash of Civilizations, Samuel Huntington challenged the prevailing consensus that the axes of international geo-political alignments reflect economic and ideological divisions. Based on a top-down analysis of the alignments of nation states, Huntington famously concluded, “The great divisions among humankind and the dominating source of conflict will be cultural.” On the 20th anniversary of the publication of Huntington’s thesis, we revisit his analysis, taking instead a bottom-up view using hundreds of millions of anonymized email and Twitter communications among tens of millions of worldwide users to map the global alignment of interpersonal relations. We also extend previous research on spatial and geographic patterns by examining economic, demographic, historical, political, and cultural correlates of international communication densities. Results confirm the existence of the eight culturally differentiated “civilizations” posited by Huntington, with the divisions corresponding to differences in language, religion, economic development, and geo-location.

Social systems may be viewed as complex multi-component systems. But given the cognitive features and the diversity of social agents, is it possible to develop explanatory theories of social phenomena, and if so, how? What are the potentials and limitations of a quantitative approach? And how to put social theories to the test, or apply them? What can physics contribute to the progress of this field? These questions will be addressed with examples from opinion formation, pedestrian, crowd, and traffic dynamics, as well as the emergence of social coordination, cooperation and norms. It will be shown that models of social phenomena can be used to create socio-inspired technologies, and to mitigate problems such as traffic jams, failures of financial systems, and conflicts. It will also be argued that many fields of physics, from mechanics, over kinetic gas theory and fluid dynamics, up to spin systems and renormalization theory could make fundamental contributions to revealing some of the most exciting (social) scientific puzzles of the 21st century.

The Power of Meta-Networks for Rapid Ethnographic Assessment (Kathleen Carley)

Each of us is embedded in and understands the world through networks. These networks, such as the social network, the knowledge network, the capabilities network constrain and enable behavior. This set of complex, evolving, multi-mode, multi-link networks form a complex socio-technical system that can be documented and analyzed using meta-networks. Meta-Networks are high dimensional interlinked multi-mode and multi-link networks that can vary by time and space. They can be rapidly extracted from media data such as on-line news and social media e.g., Twitter. When this is done, the resultant meta-networks can be assessed using network and visual analytics. These analyses provide key insights into the underlying complex socio-technical system, insight into the evolving cultures and enable a rapid ethnographic assessment of a region. Key advances in big data analytics and visualization coupled with modern text-analytics make such analyses possible. This process of data extraction and analysis is described. Then results are presented for two cases - the Benghazi Consulate Attack in September 2012 and the current state of Myanmar in 2013. These studies provide insight into the strengths and limitations of using media data to understand the underlying socio-cultural world from a dynamic network perspective.

We introduce the ``reflexivity'' index that quantifies the relative importance of short-term endogeneity for financial markets (financial indices, future commodity markets) from mid-2000s to October 2012. Our reflexivity index is defined as the average ratio of the number of price moves that are due to endogenous interactions to the total number of all price changes, which also include exogenous events. It is obtained by calibrating the Hawkes self-excited conditional Poisson model on time series of price changes. The Hawkes model accounts simultaneously for the co-existence and interplay between the exogenous impact of news and the endogenous mechanism by which past price changes may influence future price changes. Our robustness tests show that our index provides a 'pure' measure of endogeneity that is independent of the rate of activity, order size, volume or volatility. We find an overall increase of the reflexivity index since the mid-2000s to October 2012, which implies that at least 60-70 percent of financial price changes are now due to self-generated activities rather than novel information, compared to 20-30 percent earlier. While our reflexivity index is defined on short-time windows (10-30 minutes) and thus does not capture long-term memory, we discover striking coincidence between its dynamics and that of the price hikes and abrupt falls that developed during financial bubble regimes. We also show that the ``reflexivity'' index allows one to disentangle the internal dynamics from exogenous factors within the Autoregressive Conditional Duration (ACD) model. We provide a direct comparison of the Hawkes and ACD models based on numerical simulations and show that our effective measure of endogeneity for the ACD can be mapped onto the ``branching ratio'' of the Hawkes model. This opens the road to quantify the degree of endogeneity in the large class of auto-regressive models such as GARCH and extensions. The talk will provide an opportunity to present results of the Financial Crisis Observatory (www.er.ethz.ch/fco) at ETH Zurich, which aims at testing and quantifying rigorously, in a systematic way and on a large scale the hypothesis that financial bubbles can diagnosed with a rigorous scientific methodology before they burst.

The availability of big datasets on social phenomena has opened new exciting perspectives for researchers. Especially the Web, with its jungle of social Websites and data repositories, has transformed the way we study social behavior at all scales, leading to the new discipline of computational social science. Large numbers enforce the adoption of statistical techniques, aiming at the identification of regular patterns from the apparently erratic behavior of single individuals.The concepts and techniques of statistical physics have proven to be very helpful to uncover and understand such regularities in collective social behavior. Here I will give two examples of social phenomena exhibiting scaling and universality, alike critical phenomena in physical systems. I will show how, after suitable normalization, the performance of candidates in proportional elections and of scientific papers, measured by the number of votes and citations, exhibit universal distributions, regardless of the country where the elections was held and the topic of the paper.Such examples indirectly confirm the social atom hypothesis, i.e. the emergence of regular collective behavior from local interactions between people, regardless of peculiar details of the individuals.