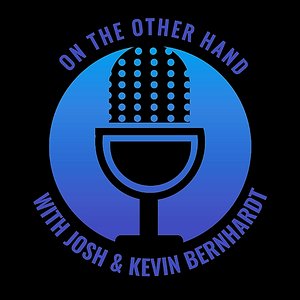 On the Other Hand

On the Other Hand is a podcast hosted and produced by Wisconsin's favorite father son duo, the eccentric professor and the idealistic millenial, Kevin Bernhardt and Josh Bernhardt. We deep dive into discussions on politics and economics, examining issues that are present in our daily lives. Between a doctorate in economics and a youthful passion for politics, On the Other Hand provides a variety of thought-provoking perspectives on these important issues that shape our culture. 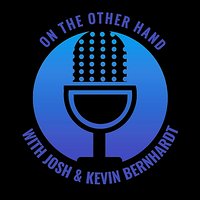 The guys are back for Episode 20 after a long break!  They talk the NFL's new anthem policy, the ruling that it is unconstitutional for Donald Trump to block people from his Twitter, and have a long discussion about the idea of free speech zone vs. private platforms.  Next, they discuss the stat that 44% of black voters feel that neither party represents them.  Finally, they end with a discussion on the Trump religion and quotes of the week.

In Episode 18, the guys focus on Syria and the recent chemical weapons attack by Assad on his own people.  We spend a lot of time discussing Syria and our Middle Eastern foreign policy, and it is a difficult issue to tackle.  Next we discuss the Omnibus Spending Bill and cover some key points mentioned there.  Then we have Stat of the Week, This Time Is Different, Quote of the Week, and Swamp Monsters Segments.

Episode 17: Who Owns Your Data?

On this week's episode, the guys lead off with a discussion on mass data collection!  Who owns your data?  Does Google or Facebook own it?  Do they own their own platforms?  Should Facebook be a platform for free speech, or should they be allowed to choose what they want to be posted on their platform?  These are all very difficult questions on a difficult topic, and we break it down on this episode.  Next in Media Bias, we have a video by Deadspin of news anchors saying the exact same message all over the country denouncing fake news.  We end with Stat of the Day and Quotes of the Week!

In Episode 16, Josh is solo again and starts by talking about how the inclusion movement has gotten out of control.  Next is a short discussion on the death penalty.  Then in economics and politics, China is the centerpiece, with an in-depth discussion on Xi's takeover and the ramifications of that.  Next up is new segment Unbiased Media, and the topic is the divergence in narrative on the principles our nation was built on.  This week's Swamp Monsters is the return of Hillary Clinton!  She is on a blame tour in India and it's out of control.  He ends with Stat of the Day and Quote of the Week!

Episode 15: Tariffs, and We Get Serious

In this Episode, we talk about the new tariffs that the Trump administration has pushed.  20% higher prices on steel and 10% higher prices on aluminum are not as good as the media would make you believe.  We end with a little bit of a heart to heart that begins with this question:  what are you willing to die for?   Make sure to download, subscribe, and leave a review on iTunes, Stitcher, TuneIn, and our podcast page ontheotherhandpodcast.libsyn.com!

In this week's show, the guys talk about Communist China and the measures that are being taken to control the people over there. They also talk about the 4th Amendment, and why it is important but has become difficult to define in this age of technology.  Then they explain the Delta vs. Georgia Lt. Governeor conflict thoroughly, pointing out why you cannot trust the mainstream media stories.  Finally, they have the return of Donald Trump's Tweet of the Week!

This week, the guys start with a discussion about the CPI numbers from January.  CPI rose much faster than expected last month, which contributed partly to the correction in the stock market discussed on Episode 12.  These numbers put the Fed in a bind - will they react to rising inflation, or sit and wait to see what happens before making any moves?  Next, they talk about the Parkland shooting and some specific policies that could be implemented that could contribute to a safer society WITHOUT a mass ban on assault rifles.

The guys are back together this week after a three week hiatus, and better than ever!  They start by talking about the new budget (if you can call it that) that recently passed.  Next, they discuss the DOW seeing an 1100 point drop last week.  Next is a discussion on Chris Long donating his entire 2017 paycheck to charity, and a few examples of the way government has abused it's power.  Finally, Swamp Monsters is back this week with Jimmy Kimmel and some ill advised comments he made.

Teddy Roosevelt shaped America's place on the global political stage, bringing it from an isolationist country to a major power player on the world stage.  Tune in to hear more about his incredible accomplishments as an American diplomat on this week's 10 minutes of History!

Episode 11: The Government Shutdown is Our Fault

Josh is solo again for this episode, and begins by talking about the migrant crisis in Sweden.  It is literally tearing the country pushing it apart and pushing it towards the brink of civil war.  Next, the big topic this week is the government shutdown!  Josh has an interesting take on it (see the title) but it's a great opportunity to examine our beliefs and what kind of government we want to live under.  He ends with a few thoughts on the Women's March vs. the March for Life.