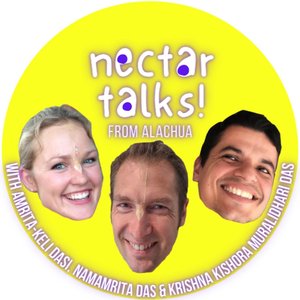 Nectar Talks is hosted by Amrita-keli and Namamrita from the heart of New Raman Reti in Alachua Florida, the largest Hare Krishna community in North America and the home of thousands of Bhakti yoga practitioners. In their ongoing interviews this dynamic duo digs deep into our search for a loving connection with Krishna (God) and each-other. With you, they uncover the real life stories and inner journeys of a vibrant community of friends and special guests. Like bees searching for nectar our hosts seek pearls of wisdom from how they live their lives and the lessons they can impart to us and their listeners. If you're seeking nectar, look no further! Find us also on YouTube and Facebook. 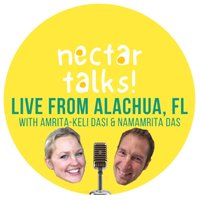 Pracarananda das is a scientist with the Bhaktivedanta Institute, BI. We get to take the insider’s look at BI. Hear his views on the importance of Vedic and modern scientific literacy. He teaches science to the students at the Bhaktivedanta Academy in Alachua. Learn of his journey with Karate and much more. Join us on: Facebook: Nectar Talks Live &amp; ISKCON AlachuaYouTube: ISKCON Alachua Hare Krishna Temple &amp; Nectar Talks You can also hear us on Apple Podcast &amp; Spotify

Hear how Sruti Sagara Das, part of a new generation of temple presidents at Gainesville’s Krishna House, navigates the dichotomy between spirituality and institution. Having grown up in India and moved to America later in life, we capture a glimpse at how he deals with living at the intersection of cultural identities. See us live on: Zoom ID: 670 694 2056Facebook: Nectar Talks Live &amp; ISKCON AlachuaYouTube: ISKCON Alachua Hare Krishna Temple &amp; Nectar Talks You can also hear us on Apple Podcast &amp; Spotify

“The Middle Way” Finding your way between Hollywood and the Himalayas.Mukunda Michael Dewil is an award-winning Hollywood film director and screenwriter. He is initiated by HH Girirja Swami, with whom he traveled as his assistant for several years when Mukunda Das was a bramachari. Hear about his journey in Krishna Consciousness and his insights into Hollywood and the filmmaking industry. Facebook: Nectar Talks Live &amp; ISKCON AlachuaYouTube: ISKCON Alachua Hare Krishna Temple &amp; Nectar Talks You can also hear us on Apple Podcast &amp; Spotify

Listen as Vegavati Devi Dasi takes us on a journey of her life beginning in Hawaii in the early 70’s. Hear her adventures on travelling sankirtan with Svarga Devi Dasi, and in India. Sri Sri Radha Damodara gave her shelter at Their lotus feet for many years in Gita Nagari. Learn about how Madan Gopal Das took shelter in her as his spiritual mother. Facebook: Nectar Talks Live &amp; ISKCON AlachuaYouTube: ISKCON Alachua Hare Krishna Temple &amp; Nectar Talks You can also hear us on Apple Podcast &amp; Spotify

Get ready to hear some of Sanka prabhu’s wild stories in Krsna Consciousness! He’s been cooking for Yogeshvara Krsna for many many years and is ready to pass the torch. How is he going to do that? Learn about his views on family and how he is dealing with his terminal diagnosis, and much more. In an effort to increase the frequency of our episodes, this is the first of a prerecorded episode which will alternate with Live ones.

In this episode of Nectar Talks, Namamrita Das interviews Vrinda Devi Sheth and Annapurna Dasi as they take us on a journey through Vrinda Devi’s Trilogy, Sita’s Fire. Hear about their creative expression, unexpected healing and giving voice to the women of the Ramayana. Vrinda Devi describes finding her voice, balance and identity through it all.

Nectar Talks hosts Gaura Shakti Das in this Episode. Along with his wife, Krishna Dhama, this husband, father, and professional has helped enliven our community for many years through his dedicated service to projects such as the Festival of the Holy Name, the Village of Vrndavana and many more. Hear about his experiences of growing up in ISKCON and how he manages to strike a balance between his career as a dentist and keeping his Bhakti alive.

How to have fun while gettin’ it done in Bhakti: A window into Akuti Dasi. Akuti Dasi is a one-of-a-kind devotee, dedicated to the arts of craftsmanship, sustainability, teaching and outreach. She's excited by fresh endeavors in Bhakti and wishes to deeply encourage the youth (and anyone else) to enjoy the heck out of serving Krishna and the world. Listen in as we dive into her adventurous past, current projects, and her future dreams.

Welcome to Nectar Talks, New Raman Reti’s very own live talk show. In this episode our hosts, Amrita-Keli Dasi and Namamrita Dasa, interviewed two pillars of our Alachua community, Vrinda and Visvambhara Aguilera. Learn about their lives and accomplishments, what makes them tick, their hopes and aspirations. Listen to the interview with this dynamic duo and get to know them more personally.

© 2020 OwlTail All rights reserved. OwlTail only owns the podcast episode rankings. Copyright of underlying podcast content is owned by the publisher, not OwlTail. Audio is streamed directly from Nectar Talks servers. Downloads goes directly to publisher.