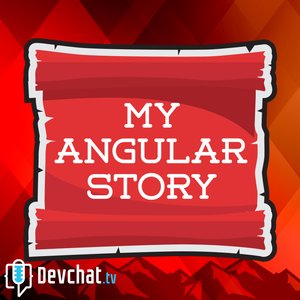 A weekly exploration into the people who make Angular what it is. 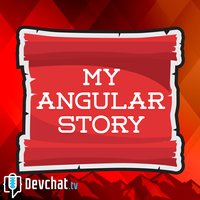 Aaron Frost On today’s episode of My Angular Story we have special guest Aaron Frost. This episode might as well be both, a My Angular Story as well as a My Javascript story. Aaron has worked with us on JS Jabber and was a panelist for Adventures in Angular. You also may know him from NG Conf, the original Angular Conference. Stay tune to hear his story! Getting Started Before Aaron got involved with Javascript or Angular, he worked as a loan officer, and he wasn’t the best at it. Luckily his job exposed him to small bits of SQL. Aaron goes to say that SQL “was like speaking English”. In 2010 he shifted into development. At the time, most web developers hated Javascript, so anytime they could pin Javascript work on him they would. Aaron loved it. College Dropout Aaron decided to go to college to learn programing, mainly as a means to an end. His goal was primarily to get a job. After finding the job, he dropped out of classes. Aaron says that he was confused by why he was still in school considering he had the job and at any rate, Aaron had learned how to teach himself. Between Stack Overflow and podcasts and Youtube, Aaron has all the resources he needed. Getting Into Work. Aaron talks about his time working with Kynetx, writing a language called Kynetx Rule Language. Kynetx was a platform where developers could create web browser plugins and it would work across the platforms. Aaron talks about the lack of frameworks then, leaving mainly only jQuery. And Then, Angular… In one of the corporations Aaron worked for, they used a framework called Backbone. Five Hundred programmers all prescribed Backbone for their work, but Aaron nudged someone in the stack team to look into Angular. It was a no brainer, Angular allowed to get the job done in much less code. They adopted it and got proficient. Conferences “Oyee! We should make one!” Aaron and Kipp Laurence decided that after they were unable to find an Angular conference to goto online that “Oyee! We should make one!” Reluctantly Aaron agreed and afterwards had someone from Google on board to send a whole team to the conference. Google Developers Experts Aaron is a GDE. He talks a bit about what that process what like and how it’s changed. He talks about what Google looks for in a GDE and clears any misconception that a GDE is about people who contribute to the community and are natural evangelists. Aaron vs Captchas Aaron talks about how one of his first projects will always be his favorite. His brother worked in real estate and used a particular website for work. The website had an annoying Captcha that had to be filled out pretty frequently. His brother asked Aaron to attempt to create a way to bypass the Captchas. Aaron talks about how at first he thought it was impossible, but after contemplating using a canvas and some basic calculations, he was able to put together a web browser extension to handle the task. They marketed the tool to others that used the website. What He Has Learned Aaron says that there is a theme that is reoccurring for him. Aaron talks about how often programmers and developers spend their efforts “chasing the pendulum” instead of focusing on solving the issues that the company needs them to solve. Programmers should worry less with how cool their patterns are or if they are using the latest Frameworks, and more about getting the job done. Keeping Up Aaron’s Twitter Aaron’s Medium Aaron’s GitHub Aaron’s AMA Picks Aaron Superpowereds Yarn Samsung SmartThings Charles Nimble BlueTick Zapier Visual Studio Code Microsoft Build