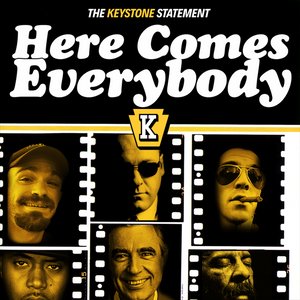 "Here Comes Everybody" is hosted by Dominic &amp; Shem The Pen. Everything from music, to movies, to conspiracy theories is on the table and it all takes place in a random coffee shop in Pittsburgh.

From the Rolling Stones to the Hell's Angels, to Sam Cutler and the tragic death of Meredith Hunter, Dom &amp; Shem talk about the historic phenomenon that was Altamont - a concert festival gone horribly wrong that could have gotten a lot worse.Further watching: Gimme ShelterFurther reading: Hell's Angels: A Strange and Terrible SagaFollow Shem The Pen @dropthemichaikuFollow Dom @DominicDeAngeloFollow @KeystoneSTMTSubscribe &amp; Review Us On iTunes (it would really help us out, ya freeloaders)

Shem &amp; Dom talk Shakespeare's Hamlet. Shem breaks down the play and gives insight on what the "To Be, Not To Be" soliloquy may have been really about and dismisses some of the more popular theories that one of Billy Shake's most famous works carries with it. In the process, Dom gets his Hamlet movies mixed up.

Ian "Uncle Fresh" Johnson joins Shem &amp; Dom to discuss David Foster Wallace's modern classic novel, Infinite Jest. Ian &amp; Shem break the book down so anybody can dive into such a vast, but entertaining endeavor, the impact that the story has today and how extremely relevant it is in today's "immediate entertainment" society. We also talk about Shaq a little bit An extremely interesting issue.Follow Shem The Pen on Twitter: @dropthemichaikuListen to Uncle Fresh's new album, Uncertainty Principles 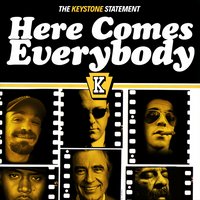 Dom &amp; Shem The Pen return to talk their hiatus, the Cornell / Bettington tragedies, Rage Against The Machine, and of course, the return of Here Comes Everybody (Season 2) including upcoming episodes on:The Grateful DeadThe Doors"Infinite Jest" by David Foster WallaceAnxiety &amp; DepressionThe SopranosAnd much more! (when we think about them)Subscribe to us on iTunes! (a review would just be stupendous)Like us on Facebook.Follow the Twitter.Shem @dropthemichaiku.Dom @DominicDeAngelo.

Dom &amp; Shem The Pen talk to Gordy &amp; Zach of the band Bat Zuppel. Their upcoming album Dylar, the struggles of touring and living your everyday life, the fickle beast that is social media, musical influences, the origin of the band's name and much more. A great listen for a fan of the Pittsburgh music scene or someone who's in a band or is thinking of starting one.PITTSBURGH SHOW DATESJune 30 - Spirit w/ HoneyJuly 8 - Farmjammalamma in Brookville, PAJuly 14 - Brillobox  w/Ghost GutsJuly 15 - Deutchtown Music FestMINI-TOUR DATESJuly 19 - Kent, OH at Stone TavernJuly 20 - Columbus, OH at LaundromatJuly 21 - Chicago, IL at Cole's BarJuly 22 - Ann Arbor, MI at Far House Find Bat Zuppel music &amp; merch: batzuppel.bandcamp.comVisit batzuppel.comFollow them on Instagram!Like them on Facebook!Subscribe to us on iTunes (write us a fine review, eh?)

Subscribe to us on iTunes!Episode Summary: He wasn't called "Tricky Dick" for nothing. Enjoy the classic American spy caper we now come to know as Watergate. And don't forget about Checkers.Like us on Facebook!Follow the Twitter!

Subscribe to us on iTunes!Episode Summary: Shem delivers a graduate course to Dom on the history of Led Zeppelin.Like us on Facebook!Follow the Twitter!

Subscribe to us on iTunes!Episode Summary: Shem breaks down King Lear with South Park, Wes Anderson and Dom sees scary connections to Vince McMahon &amp; WWE.Like us on Facebook!Follow the Twitter!

Episode Summary: This one's a doozy - Shem gives Dom a history lesson on the origins of rap as he talks about Bob Dylan, the pioneers/influences of the mid-to-late 80s, the renaissance boom of the 90s with Tupac &amp; Biggie and the heavy hitters of today's landscape like Kendrick Lamar and Roc Marciano. Enjoy the companion playlist below (thanks to our friends at YouTube) and on Spotify as well as the Dean Martin video Dom mentions in the episode.THE ART OF MC PLAYLIST"Subterranean Homesick Blues" - Bob Dylan"When The Revolution Comes" - Last Poets"Mahogany" - Eric B &amp; Rakim"Mr. Pitiful" - Big Daddy Kane"My Philosophy" - KRS-One"Fugitive" - K Solo"Road To The Riches" - Kool G Rap"Welcome To The Terrordome" - Public Enemy"Only God Can Judge Me" - Tupac"My Downfall" - Notorious B.I.G."Doo Rags" - Nas"D'Evils" - Jay-Z"A Day At The Races" - Jurassic 5 (feat. Big Daddy Kane)"50 Bars" - 50 Cent"Good Kid" - Kendrick Lamar"Gustavo" - Westside Gunn"Thug's Prayer" - Roc Marciano

Shem breaks down Finnegan's Wake as Dom tries to use Robert De Niro to make sense of it all. Also, Shem reveals the origin of "Here Comes Everybody".

© 2020 OwlTail All rights reserved. OwlTail only owns the podcast episode rankings. Copyright of underlying podcast content is owned by the publisher, not OwlTail. Audio is streamed directly from The Keystone Statement servers. Downloads goes directly to publisher.