Join Heidi and Rory while they talk about 3 favorites (book, movie/tv show, music, and sometimes something else) and whatever tangents they encounter along the way. Warning: there are Spoilers Ahead. 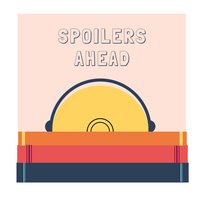 Heidi’s joined by special guest Jessa to talk about The Curious Incident of the Dog in the Night Time by Mark Haddon, Badlands by Halsey (how do we say that?), and one of their favorite and most formative movies, Legally Blonde! Some other topics include: T.S. Eliot’s The Wasteland, autism, moral ambiguity, and Tetris.  Jessa’s Recommendation of the Week:Get bangs! Get a tattoo! Do that thing you’ve been wanting to do!   Heidi’s Recommendation of the Week: The soundtrack for the Netflix original, Dumplin’. Alternatively, Dolly Parton’s discography.  Spoilers Ahead now has Twitter and Instagram! Follow along @Spoilers_Ahead_ on both.You can get Spoilers Ahead stickers at hidturner.com/store and join Patreon as a supporter at patreon.com/hidturner.  Don’t forget to leave us a review on iTunes!