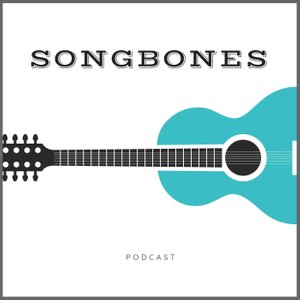 We get to the real and go to the deep with grassroots singer-songwriters. Traveling Troubadours. Nouveau Bards. Hosted by: Michelle McAfee

Paul plays the hell out of a guitar and was a co-founder of the band Hanuman, a four-piece all-acoustic instrumental ensemble that released four albums, sold over 8,000 recordings and toured upwards of 200 dates a year all over the U.S. Running a band is like running a marriage, and well…..Hanuman broke up after a stellar run in the indie music world.Songs pour through Paul like water through a river canyon - the man has 11 albums under his belt, including his new release, Lost Days, Long Nights which you can find here: https://paulbenoit.hearnow.com. His solo work is laced with blues, folk and rock influences, his albums are the kind you want on repeat driving cross-country.We played a string of shows from Southern Oregon to Seattle and just before he had to run to work on the last day, I caught him at home. We talked of being on the road, the travel bug and how he makes the troubadour life work.Welcome to Episode 5.MUSIC CREDITSOphelia (Intro/Outro) - Les Hayden https://leshayden.bandcamp.comPedalhorse - Hanuman https://store.cdbaby.com/cd/hanuman00Running Eiskrokodil - Loco Lobo http://freemusicarchive.org/music/Lobo_Loco/Lost Days, Long Nights - Paul Benoit https://paulbenoit.hearnow.comHosted and Recorded by Michelle McAfeewww.songbones.com© 2018-2019 SONGBONES MAGAZINE AND PODCAST 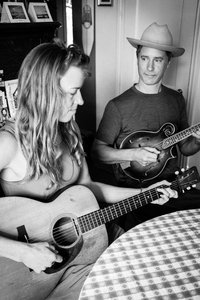 Have you heard Foghorn Stringband? Then you’ve heard Caleb Klauder and Reeb Willms. Based in Portland, Oregon, where the old-time music scene is alive and well, Caleb and Reeb balance life working in four different bands and still manage to keep a small food farm thriving in their front yard. When they aren’t on the road with Foghorn Stringband, or The Caleb Klauder Country Band, or the The Cajun County Revival, they are out playing house concerts and small theaters as a duo.Their vocal blend is uncanny and dreamy and makes me want to kick off my shoes, pull up a swinging chair on the front porch and sip lemonade. Caleb writes songs that get you up to do-si-do and is one heck of a mandolin player. Reeb is one of the best rhythm guitar players I’ve heard, with a right hand as steady as a metronome.They play original music, old-time, bluegrass, cajun, country, and pretty much any style in between. I spent the afternoon with them, talking about songwriting, learning to sing, juggling projects, dealing with fear and The Great Big Fais-do-do. - MMWelcome to Episode 4.MUSIC CREDITSOPHELIA (INTO/OUTRO) - LES HAYDEN HTTPS://LESHAYDEN.BANDCAMP.COMLAST OF MY KIND - PAUL BURCH http://paulburch.comNEW SHOES - CALEB KLAUDER https://calebklauder.comSOLDIER’S JOY (Traditional) - POT OF EARTH PUBLISHING (ASCAP) HTTPS://WWW.NEOSOUNDS.COM/SONGSBACK OUT WEST - WILLIAM NAUGHTON (APRA) / LYNNE PUBLISHING (PRS) HTTPS://WWW.NEOSOUNDS.COM/SONGSCAJUN GUMBO - JOHN FRANCIS JORGENSEN (BMI) / LYNNE PUBLISHING (PRS) HTTPS://WWW.NEOSOUNDS.COM/SONGSRECORDED AND HOSTED BY MICHELLE McAFEE ( MUSIC / PHOTOGRAPHY )© 2018-2019 A SONGBONES MAGAZINE PODCAST 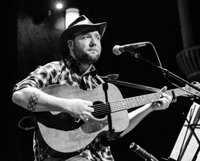 It was dumping rain one night when I got a call that Mickey Ryan was playing an impromptu show with his buddy Kory Quinn from Portland at Cocina 7, our neighborhood taqueria in Southern Oregon. It was one of those nights - hard to leave the wood stove and the couch. Mickey said, “I think you’ll really dig Kory’s songs.” And he was right. The next day I invited them to the cabin and put a mic up in the room.Kory’s voice is disarming and full of no bullshit. He used to go to gigs via hitchhiking, that’s how Mickey found him. Mickey plays the hell out of a dobro, is steeped in bluegrass and gigs wherever the music takes him.Kory shared his songs up close and talked of the craft of songwriting, The Muses, and his favorite thing about touring. Welcome to Episode 3.MUSIC CREDITSOphelia (Intro and Outro) - Les HaydenBad Moves To Make - Williams Naughton (APRA) / Lynne Publishing (PRS) https://www.neosounds.com/songs/10471Ten Foot Rope, Dead Man, Annabelle - Kory Quinn https://www.koryquinn.com/PodcastHosted and Recorded by Michelle McAfee ( MUSIC / PHOTOGRAPHY )© 2018-2019 A SONGBONES MAGAZINE AND PODCAST

This woman is a powerhouse. Not only in vocals and performance, but also in how she communicates and sees the world…and she has the most enviable mane of hair i’ve ever seen! There is a mystery that surrounds Kris for me, like she could be a character out of a kerouac novel. When she’s on stage she gives herself completely to the performance and it feels like you’ve known her all your life. But run into her at a coffeeshop, and she’ll be polite and friendly, funny and warm, while exuding the sense of knowing the secrets of the world but she’ll never tell you.She moved to Portland from California 20+ years ago and is unafraid to talk about her part in gentrification - displacing other people when she moved into NorthEast Portland and how folks now are still being displaced by “development &amp; progress”. This woman knows her heart and is fearless in talking about the things most of us would rather not.She was half of the duo Kris &amp; Adam when she arrived in the Northwest, which later became Sweetjuice. Decades of touring and living the troubadour lifestyle came to a halt when her mother became ill and she had to remain in portland to caretake. So… she created a 10-piece soul band called The Hurt and played about as much as a band can play regionally during the 5 years she was tethered to Portland. Kris DeeLane and The Hurt consistently play shows at Alberta Rose Theater, Doug Fir Lounge, and The Laurelthirst. Kris is also a very key figure in The Next Waltz - a tribute to The Band’s “Last Waltz” by many of Portlands finest musicians to raise money for The Jeremy Wilson Foundation.In this podcast, Kris DeeLane dives deep into many things other people might gloss over.*Explicit Language*We’d like to thank our very first sponsor for SONGBONES Podcast!!Chickadee RemedyMUSIC CREDITSOPHELIA - (INTRO/OUTRO) - Les Hayden HTTPS://LESHAYDEN.BANDCAMP.COMSouthern Church - Jeremy Sherman (PRS) / Lynne Publishing (PRS) - http://neosounds.comRound The Bend - John Francis Jorgensen (BMI) / Lynne Publishing (PRS) - http://neosounds.comBad Woman - Julio Kladniew (SADAIC) / Lynne Publishing (PRS) - http://neosounds.comRECORDED AND HOSTED BY MICHELLE MCAFEE (MUSIC / PHOTOGRAPHY)© 2018-2019 SONGBONES MAGAZINE AND PODCAST

Welcome back! This is part two of the interview with horn player extraordinaire, Mikey Stevens. If you’d like some backstory on Mikey, take a listen to Episode 10, Part One.In this episode, Mikey talks about a harrowing drive to the best gig of his life, and tells us about a dramatic event that changed the course fo his life and how he is dealing with it as a musician.Mikey Stevens is a well-loved, Southern Oregon trumpet and guitar player. If you’ve played music in Southern Oregon, you’ve likely played with Mikey at some point. He has a lot of stories to tell, a lot of wisdom to share. You can find out more about Mikey Stevens on our Spotlight page at www.songbones.com/spotlight where you’ll find original songs recorded and performed by Mikey, and videos of Mikey performing live.Welcome to Episode 11.MUSIC CREDITSOPHELIA- (INTRO/OUTRO) - Les HaydenLove You More Today - Mikey StevensNo Name- Mikey StevensWhat Good Am I - Mikey StevensWhat A Wonderful World (Live Performance) - Mikey StevensHosted &amp; Recorded by Michelle McAfeewww.songbones.com© 2018-2020 SONGBONES PODCAST

© 2020 OwlTail All rights reserved. OwlTail only owns the podcast episode rankings. Copyright of underlying podcast content is owned by the publisher, not OwlTail. Audio is streamed directly from SONGBONES Magazine servers. Downloads goes directly to publisher.