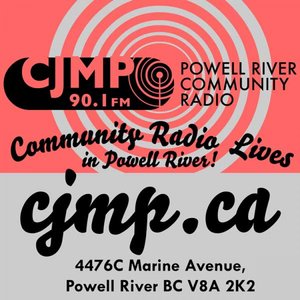 Featuring a selection of our live and local programs from Powell River Community Radio, CJMP 90.1FM.

Snow! And interviews with Shawn Cator, operational manager for the city of Powell River, Caitlin Bryant of Expose Yourself and Chris McDonough of Villa Soccer. We also feature "silver linings" on this "Positive Friday"

On today's episode we covered BC Premier Christy Clark's visit to Powell River. We also talk to Phil Russell and John Louie who are two people behind the Spirit of Reconciliation project.

For this episode, we’re going to focus on one person in this community who has been a leader for many.    She received an honourary doctorate from Vancouver Island University in 2010. Received a lifetime achievement award from the Canadian Historical Association. The book Written as I remember It: Teachings from a Sliammon Elder, published in 2014, won several awards. We are of course talking about Dr. Elsie Paul of the Tla’amin Nation.   Here she is speaking to Drewen Young in the 2015 on Elsie’s patio. Elsie had just come back from the Truth and Reconciliation closing ceremony in Ottawa. She talks about that and her experience growing up in the era of residential schools.

We're talking about Fentanyl and harm reduction today on CJMP News. Tune in to hear interviews with a number of people from the community who are involved with preventing overdoses, health providers, and including someone who has personal experience with harm reduction. Notice of error: On this episode we stated that there was a report of a death related to a marijuana joint laced with Fentanyl. This is not true and has not been substaniated by BC RCMP. The audio recording will be edited to reflect this. For more information about Fentanyl linked to marijuana see: https://is.gd/c7yvCD. We apologize for this error.

On this episode we talk to two in-studio guests; we talk to local resident Francine Benoit about the petition she started in favour of carriage housing, and we also speak to Susan MacKay, founder of the Wild Ocean Whale Society comes in to tell us more about recent coastal activity, and the dolphins and whales that make this area home.  Photo by Michelle Pennell

On today's show we look back through 2016 at some of the newsy highlights through the year, including a few of CJMP dj's top trax for 2016.

On today's show we speak with Eagle Walz, co-founder of the Sunshine Coast Trail and the Powell River Parks and Wilderness Society, and Russell Brewer, regional district director, about the Regional Trails Plan.  On Thursday, Dec 15, the Powell River Regional District received the 226 page draft. In the next few months the plan will be finalized, affecting more than 500-plus trails in the region. Read it here Hosts: Carrie Swiggum, Peter Harvey Musical Host: Roger Thorn Photo: http://www.sunshinecoastcanada.com/hidden-gems/sunshine-coast-trail

We cover the Dec 15 Regional District Committee of the Whole delegations: Friends of Stillwater Bluffs Association and PR Paws concerns over the Regional Trails Plan. Hosted by Roger Thorn and Carrie Swiggum

On today’s show, we look at food security and farming on the sunshine coast. We talk to Robert Gilchrist of Funky Beets Farm and member of the Powell River Farmers Institute.He made a remark at council on Nov 29 regarding the region’s lack of a farming strategy. We also talk to Chris Roberts of Okeover Organic Oysters from the Oyster Capital of Canada. But first we’re going to announce the winners of the SPCA Fall Raffle…