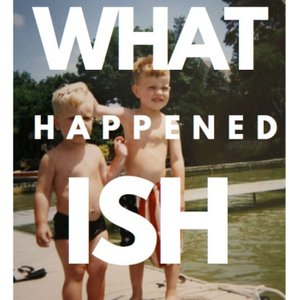 Walter and Oscar review the week in news. From politics, to entertainment, we cover the biggest news stories simply and hilariously so any body can understand. funnier than CNN and more accurate than Fox"

The MET Gala is tonight featuring a "Camp" theme, we have Special Guest David talking NBA and Elon Musk's big promise for Tesla. Companies are taking over student loans for college kids, New Segment "This Day In History," and Imperfect Produce is flooding us with veggies.

We are back from Spring Break as we celebrate our 1 year anniversary of the podcast. Theresa May is Brexit-ing from her job as Prime Minister, Jay Z is making money history, Warren Buffet is hosting a buffet worth millions, DACA (the Dreamers) are one step closer to becoming citizens of the United States, and we have special guest Thales Correa; a Brazilian filmmaker and producer of the feature film "Bathroom Stalls and Parking Lots." A film starring your very own Oscar.

Supreme is putting its logo on more stupid stuff for thousands of dollars, the Matrix is putting out its 4th movie, micro apartments are popping up in New York, Apple TV+ is coming out this fall, the owner of Google is buying some of the Brooklyn Nets, and Spiderman is leaving the Marvel universe. Google You and Google Me.

Does fall get you nostalgic? We chat about our original dirty internet searches, being a nervous hormonal kid, and the ups and (mostly) downs of being young. Don't worry, we have all the news for you as the MLB playoffs begin, Iran is up to some sketchy election business, The Joker is hitting box offices, James Franco got a bit too handsy, its National Boyfriend day, and new Pokemon Shield and Sword coming soon! Google you and don't Google dirty internet stuff!

Hot dogs are back in a big way propelling Trump to a 2020 victory, Netflix is moving to Sirius XM, Bernie is storing poop in his growing hump, the NHL playoffs have begun, Kim Kardashian has announced that she has planned to take the Bar exam, and the first picture of a black hole is a real bummer.

Kids are taking the Momo Challenge too seriously, Walter gives an NBA update, Nature is raging through the south, Google is accidentally paying women more than men, Luke Perry star of Riverdale (and that's it) has passed, and there's collusion going on in a West Virginia church. Google you and Google me.

Aunt Becky, S3XY Teslas, and Mama June is Back on the Crack

Elon Musk debuts his newest Tesla with an immature pun, Aunt Becky is struggling to bribe USC into getting her daughter into college, Mama June is busted with a crack pipe, Burger King is revolutionizing how we drink coffee, and Pokemon makes a rare comeback in this week's podcast with Walter and Oscar.

Lots of sexual tensions with Robert Kraft, the Kardashians, and Lady Gaga. Possible presidents are running all over the place, Oscar presents the Oscars, and R Kelly is maybe the worst person ever.

We're in a new studio this week as we talk about 8th grade A.I. being smarter than us, Popeye's chicken sandwich is overrated, Hurricane Dorian (everyone named Dorian stinks) is causing damage, Walmart is stopping sales of assault rifle ammunition, Lyft drivers are getting a bit too touchy feely with a BLIND person, and its football season yet again. Google you Google me.

This week, whales are back in a big way (literally), AOC makes her endorsement, Chicago teachers are on strike (no school, hell ya), the Nationals are going to the World Series, Jalen RAMsey to the Rams, Walter's NBA Corner making big decisions and Spooky Season is in full swing. Google You Google Me Google We.

We have two 2 special guests Sean Mckeon with the 'Area 51 Corner' and Libby Goyette with 'Libby's Murder Corner.'  Old Town Road and Mason Ramsey have yet another remix, Thor gets a record setting Marvel movie, Tennessee police are telling people to not flush meth down the toilet, Russel Westbrook to the Rockets, Game of Thrones leads the way at the Emmys and Cardi Bi endorse our guy, Bernie "The Hump" Sanders.

This week we have our family on as extra special guests, Walter breaks down the NBA free agencies move including Kawhi Leonard, Lebron James and our new Detroit Piston Russel Westbrook. Friends and The Office are switching teams in their free agencies, big Uterus news for babies and the Women's World Cup ladies, also U.S. life expectancy is taking a deadly turn for the worse.

Women's World Cup, Bitcoin is BACK, Monkeys, and E-Cigarrettes

This week San Francisco becomes the first city to ban e-cigarettes (aka JUUL), Capuchin Monkeys are making tools for pleasure, Trump is a loving and forgiving president according to Twitter, Giannis Antetokounmpo is the NBA's new MVP, Avengers Endgame is getting thirsty for Avatar's record, and Bitcoin is back baby!

This week we talk Antonio Brown vs. the NFL, North Korea is launching missiles into the ocean, Jeffrey Epstein is "allegedly murdered," Number Neighbors are a thing, and Pizza Hut is struggling despite the cheese-stuffed crust. Walmart isn't displaying violent video games (Pokemon player special guest), Uber is struggling and Moviepass tried to scam old people. Google you and Google me.

This week we have a very conversational episode, much about the live's of our 2 hosts Oscar and Walter. We chat about Iran not being Iraq, A$AP Rocky and Trump, Tinder, the new Prime Minister of Britain, the NFL always has drama, Mueller didn't get anything accomplished and the NFL is in the news again. Google You and Google Me.

Fall is Back, E-Cigs are Out, Greta Thurnberg and the Tigers Stink

This week we're back with dogs sniffing their own poop, Greta Thurnberg taking on Trump, the Detroit Tigers are having a historic season, Walter is craving an e-cig even though they're being banned, Pumpkin Spice is in full Fall bloom, and we have serious worries about Antonio Brown. Google You Google Me.

It was a witch hunt after all, as Trump apparently didn't collude. Measles have struck New York! The World's seeds are in danger, McGregor and Gronkowski are "retiring," and Facebook isn't allowing white nationalist talk anymore.

RIP segment, Burger King manages to be on the show for two straight weeks (heat check BK), the Final Four has arrived with our own Michigan State Spartans, we imagine life without things from Mexico, bad April Fool's jokes, and NBA players cn get fined $35,000 for tweeting two letters.

This week we have special guest Dr. Katy explaining the Maureen Walsh nursing situation, the Avengers Endgame with Thanos (TheraFlu) is coming in hot, more Boy Scout leaders are being outed for sexual harassment, Sri Lanka had a devastating Easter, and Canada and Justin Trudeau is sending all their poopy adult diapers to the Philippines.

© 2020 OwlTail All rights reserved. OwlTail only owns the podcast episode rankings. Copyright of underlying podcast content is owned by the publisher, not OwlTail. Audio is streamed directly from Oscar and Walter Mansky servers. Downloads goes directly to publisher.