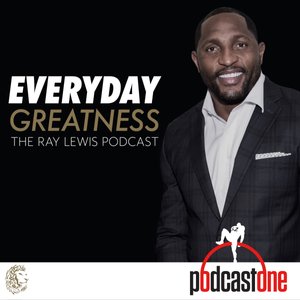 Pro Football Hall of Famer Ray Lewis is one of the most dominating defensive players in NFL history. He led the Baltimore Ravens for the entirety of his 17-year career, including two Super Bowl championships. Through compelling interviews and sharing personal stories and life lessons – both on and off the field, “Everyday Greatness: The Ray Lewis Podcast” is an opportunity to join the former NFL linebacker in his life-long quest to understand what inspires and motivates GREATNESS. Throughout his life, Ray is known for devoting his time to those in need, giving guidance to the masses, and meeting people exactly where they are, and you can expect the same devotion to his listeners. 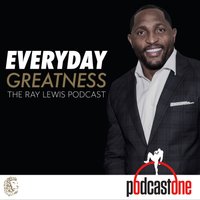 Ray Lewis chats with Gary Sheffield about his legendary career in the MLB! Plus, Ray &amp; Coach Monte Sanders discuss the latest Championship Mentality principle: Your Company Matters, Your Environment Matters!! Your vision chooses your friends!

Ray Lewis &amp; Coach Monte Sanders GO BACK to recap the latest principles of Championship Mentality! Write it Down! What is a Champion - Who's Eligible? You vs. You - No Competition, Mind-Body-Spirit, Planning, No Excuses Mentality, Gratitude, Living A life of Gratitude, Self-Discipline, Courage, Persistence, Time Efficiency, Self-Study, &amp; The Shortcut!

Shawne "Lights Out" Merriman discusses why football was his sanctuary! Plus, Ray Lewis &amp; Coach Monte Sanders talk about Ray's birthday, and the Championship Mentality program of the day: avoiding the shortcuts!

Ray Lewis invites Pastor Swanzy in an another incredible episode of Championship Mentality: Time Efficiency! Ray &amp; Pastor Swanzy discuss what inspired him to a life in ministry, how he defines time &amp; time management, maximizing your time, time's relationship to stress &amp; anxiety in your life, how to keep your life in order, and much more! PLUS, Ray &amp; Coach Monte Sanders discuss Time, and give you the steps you need to becoming Time Master! Time is a gift from God to all humanity!

Ray Lewis invites the great Michael Vick in this week's episode of Championship Mentality: Persistence! Ray &amp; Mike discuss the moment that first got him starting playing quarterback, his fear of Ray on the field, what he learned from Donovan McNabb, Miami &amp; Virginia Tech rivalry, his thoughts being drafted by the Atlanta Falcons, one play in his career he remembers most, when he told himself he needed to do more, how he defines persistence, the next generation of players, fishing, and so much more! PLUS, Ray &amp; Coach Monte Sanders discuss the importance of Persistence, what is it, and give you the steps you need to remain Persistent! Persistence confirms that your original intentions were real!

Ray Lewis invites MMA Fighter Anthony Pettis in this week's episode of Championship Mentality: Courage! Ray &amp; Anthony dive into his path into the world of fighting, his process to becoming a black belt in four martial arts disciplines, how he got in the cage, his aspirations to becoming a champion in three different leagues, his process of preparing for a fight, how he defines courage, the PFL league, how he wants people to remember him, what he's found in the teaching process, and what makes him never quit!!! PLUS, Ray &amp; Coach Monte Sanders discuss the importance of Courage, how fear plays a role, and give you the steps you need to train your Courage muscle! Your life unfolds in proportion to your courage!

Ray Lewis invites World's Strongest Man Mark Henry in this week's episode of Championship Mentality: Discipline! Ray &amp; Mark dive into his path to becoming a BEAST and a world champion in three sports, how he defines his mentality playing sports, his influences growing up, what got him into wrestling, how he uses success as a drug, the importance of mentorship, overconfidence, how he learned from failure, Larry Allen, and so much more! PLUS, Ray &amp; Coach Monte Sanders discuss the importance of Discipline through the process, how to define it, and give you the steps you need to train your Discipline muscle! Discipline is good for your health!

Ray Lewis invites MMA Legend Randy "The Natural" Couture in this week's episode of Championship Mentality: Having Gratitude! Ray &amp; Randy dive into his path into fighting, how the professional path for fighting has changed, how he discovered his championship mentality, his time at Oklahoma State, the PFL league, how Ray studied fighting to use in his game, what he would change, and his best advice for young athletes! PLUS, Ray &amp; Coach Monte discuss the importance of Having Gratitude, and give you the steps you need to train your gratitude muscle!

Grab your pen!!! Ray Lewis &amp; Monte Sanders kick off episode two of Championship Mentality: No Excuses! Ray &amp; Coach Monte discuss the unwritten rule of their training mentality: NO EXCUSES! The guys tell stories from training camps, self-affirmations, cursing, the power of music, how Ray overcame his tricep injury, and how they competed against themselves to be the best - It's not what happens to us, it's what we do that defines us! MAKE UP YOUR MIND and the victory is already won - so what are you telling yourself?

© 2020 OwlTail All rights reserved. OwlTail only owns the podcast episode rankings. Copyright of underlying podcast content is owned by the publisher, not OwlTail. Audio is streamed directly from PodcastOne servers. Downloads goes directly to publisher.