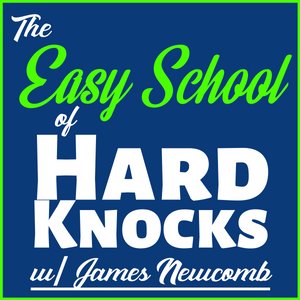 The Easy School of Hard Knocks

The Easy School of Hard Knocks is cool.That is all.More to follow.

The Cremation of Sam McGee; a Poem by Robert Service

Like what you're hearing? Consider this your informal invitation to check out my podcast.Just type in checkoutmypodcast.com in your browser!

A Seed in the Mud (by Paul Berchtold)

Once upon a time there was a seed buried in the mud.It was in dark blackness. It was cold and wet. It shivered. It was just plain no fun.It was icky. It was dirty. It was muddy. It was mucky. It was stuck in the mud.How it got there is a little 3 sentence story.One nice breezy Fall day, it had fallen on the ground. Then it rained a little. And a deer came along and stepped on it and pushed it deep in the mud.Life just wasn't fair. It was all alone. If only it had fallen like the other seeds in the grass, or on the log over there, or at least not been stepped on.But what the little seed did not see wasthe mouse that ate the seeds in the grassand the bird that ate the seeds on the logand the chipmunk that gathered the seeds on the ground to store and eat all winter long.It couldn't see this because it was stuck in the mud. It didn't know how lucky it was.Now besides being squished tight in the mud, it was also locked in it's shell. It tried to get out of it's terrible predicament, but the Fall days got shorter and shorter. It got colder and colder too. It had no strength to get out of its shell. The mud was frozen solid, the deep snow covered it. It went through a terribly cold and dark winter.Finally, after what seemed forever, slowly the days grew a little longer, a little warmer. The seed had work to do. It began to grow.The water in the mud had softened its shell. Still, how hard it was to get out of its shell ! It had to exert energy like never before. It struggled and struggled. Finally it broke free.Then it used more energy to go not up, but down, struggling to send a tiny little root through that compacted mud -- that terribly icky place. It needed something to tightly hold on to, because...........now it had to struggle yet again with great effort to send a tiny little shoot to the light above -- through all that icky mud. Finally it was free. It reached the warm sunlight.You would think its troubles were over. Not so fast. In a whole year it grew only a few inches, while the other plants grew by leaps and bounds, as if to mock the little seed. Every fall it lost its leaves. In winter it barely survived, covered with snow. And as it got a little taller, it had to go through windstorms and blizzards.But one thing was peculiar. Even while it slowly grew up to the sunny blue sky, it never forgot its roots. It had the wisdom to keep growing its roots deeper and deeper in the mud.In fact, it used every wind storm, every blizzard, every shaking, every vibration to wiggle its roots deeper and deeper into the black icky mud.It knew the importance of a solid foundation, because it always remembered where it came from, how it had been protected and helped by the mud.The years rolled on, and the seasons too. Each summer it so slowly but surely grew. Each winter it became a little tougher and stronger. It had little joys and little sorrows throughout its life like all of us do.Then came the fiercest of all storms. The wind blew so violently this way and that. Trees all around were dashed to the ground, broken, uprooted, a jangled mess.After the devastation, the sun shone once again. To be sure, it didn't look so pretty, some leaves were missing, in fact, quite a few, but that would soon be remedied.Because it hadn't forgotten its roots as a seed in the mud, it stood there in all its glory. It had become the mighty oak tree.

Like what you hear? Then check out my podcast today!Just type in checkoutmypodcast.com in your browser.

Win One for The Gipper

The most successful college football coach of all time was Knute Rockne of Notre Dame and he had tremendous seasons but one year in the late 20s he had an average team and they had a big game towards the end of the season against the undefeated cadets from West Point at Yankee Stadium. So Rockne got the team in the locker room before the game, he said “You all know who George Gipp was? George Gipp is the greatest player ever in the history of Notre Dame. You might have known the story that his senior year he died right on campus on our infirmary and I was with him the night he died tragically and I said “George is there anything I can do for you?” He said “This is it. There’s nothing you can do for me” He said “George, there must be something I can do for you” and he looked up at me and he was very short of breath and he said “Coach, there’s going to come a time when you’re going to want to win a game more than anything else in the world. When that times comes, tell the boys to win one for the Gipper.” Rockne told the story, he looked around the room, he said “Boys, this is that game.”Final score Notre Dame 12 West Point 3.

Chop It Ralph Wins the Prize Through Smarts, Not Strength

Check out my podcast today! checkoutmypodcast.com

How do you define success? What about failure?Check out my brand new ebook, Success and Failure. I didn't write it. A British guy wrote it in the late 1800's. So the language is a bit dated, but the wisdom and principles in it are timeless.Just go to my home page, https://jamesnewcomb.io and you can download Success and Failure for FREE!You're welcome.

All That Success...And He's Still a Jerk

What are your thoughts on what I shared in today's episode? Drop me a line: james@jamesnewcomb.io

The Story of Olympic Wrestler Dan Gable: "Like a Pitcher Throwing 3 No Hitters In the World Series..."

Check out my podcast. And tell your friends to check it out too!checkoutmypodcast.com

Like what you're hearing? Then check out my podcast!checkoutmypodcast.com

The "Big Rocks" of Life by Dr. Stephen R. Covey

One day this expert was speaking to a group of business students and, to drive home a point, used an illustration I’m sure those students will never forget. After I share it with you, you’ll never forget it either.As this man stood in front of the group of high-powered over-achievers he said, "Okay, time for a quiz." Then he pulled out a one-gallon, wide-mouthed mason jar and set it on a table in front of him. Then he produced about a dozen fist-sized rocks and carefully placed them, one at a time, into the jar.When the jar was filled to the top and no more rocks would fit inside, he asked, "Is this jar full?" Everyone in the class said, "Yes." Then he said, "Really?" He reached under the table and pulled out a bucket of gravel. Then he dumped some gravel in and shook the jar causing pieces of gravel to work themselves down into the spaces between the big rocks.Then he smiled and asked the group once more, "Is the jar full?" By this time the class was onto him. "Probably not," one of them answered. "Good!" he replied. And he reached under the table and brought out a bucket of sand. He started dumping the sand in and it went into all the spaces left between the rocks and the gravel. Once more he asked the question, "Is this jar full?""No!" the class shouted. Once again he said, "Good!" Then he grabbed a pitcher of water and began to pour it in until the jar was filled to the brim. Then he looked up at the class and asked, "What is the point of this illustration?"One eager beaver raised his hand and said, "The point is, no matter how full your schedule is, if you try really hard, you can always fit some more things into it!""No," the speaker replied, "that’s not the point. The truth this illustration teaches us is: If you don’t put the big rocks in first, you’ll never get them in at all."What are the big rocks in your life? A project that you want to accomplish? Time with your loved ones? Your faith, your education, your finances? A cause? Teaching or mentoring others? Remember to put these Big Rocks in first or you’ll never get them in at all.

Today's episode is an excerpt from a recent episode of The Trumpet Jungle podcast, where I featured a stellar young trumpeter named Patrick Oliverio. Patrick was awarded First Place in the graduate division of the National Trumpet Competition in 2017. I asked him what he does to prepare for an important performance such as that one. This is what he said.You can hear my entire conversation w/ Patrick at https://jamesnewcomb.io/patrickoP.S. I used two "pop" filters for today's episode title.

Olympic Bobsledder Helps Competitor, Only to Lose the Gold Medal

The winter Olympics were held in Innsbruck, Austria, from January 29 to February 9, 1964. In the two-man bobsled, the greatest driver in the world was Eugenio Monti from Italy. Eugenia just ended his last run in with an incredible time.There was only one team left.Nobody was going to beat the Italians. The last team was from Great Britain with Tony Nash as the driver.Tony was good but nobody was going to beat the great Eugenio Monti’s time. At the end of the course Eugenio Monti's team was celebrating. Part of Tony Nash's sled was broken.And he can’t take his last run. And Eugenio Monti said “Which part?”And the guy told him. Tony Nash had the exact same sled, so Eugenio Monti detached the part from his sled, sent it up to the top of the course and Tony Nash attached it to his sled.Nash took his last run, and won. Eugenio Monti didn’t want to win because somebody had an defected sled. He wanted his best to be against Tony Nash’s best, and he lost. Four years later Monti wonWe’re still telling this story because that was one of the great stories of sportsmanship of all time.And because of that Monti won the Pierre de Coubertin Sportsmanship Award, which is very rarely given out. It's only been given out a few times in the history of the Olympic Games.What about you?Are you in it to win it at all cost?

© 2020 OwlTail All rights reserved. OwlTail only owns the podcast episode rankings. Copyright of underlying podcast content is owned by the publisher, not OwlTail. Audio is streamed directly from James Newcomb servers. Downloads goes directly to publisher.