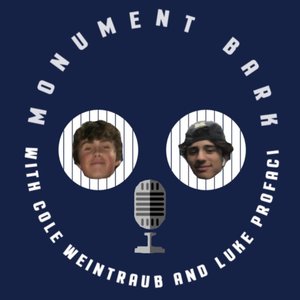 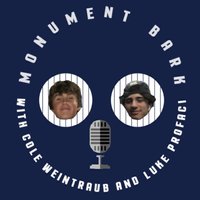 After a bit of a break, Cole and Luke are back to talk about the depressing New York Yankees. After winning four out of five versus Boston and Philadelphia, the Yankees traveled to Fenway Park for a major four game set. Although the Bronx Bombers had a lead in all four contests, they still dropped three out of four, falling nine games out of first place in the AL East. The two hosts breakdown the upsetting series and write off the season as a whole.

In an action-packed thirteenth episode, Cole and Luke talk all about the Yanks' west coast trip heading into the All Star Break, breakdown some of our recent draftees, touch on the All Star Game festivities, and talk trade rumors. You don't want to miss out on Cole's rant on a certain left-handed hitting slugger...

In an all new episode, Cole and Luke reiterate that the season is over. We go over this past week, talk about potential trade chips, and how this team could look in the future. Short and sweet episode. Give it a listen.

From a 5-1 week to a 2-4 week. Where's the consistency? The New York Yankees put up another brutal week, erasing all of last week's success. Cole and Luke talk about the miserable week as a whole and take a couple calls from the listeners. Episodes that follow getting swept by the Sox are always a doozy. Check it out.

Time flies when you're having fun! The tenth episode of the Monument Bark podcast is here! Cole and Luke give their thoughts on the Yanks' success, a glimpse of throwback Gary, our insane amount of triple plays, the MLB's regulations on foreign substances, and much more!

In the ninth episode, Cole and Luke carry on with the bad vibes as the Yanks keep struggling. After showing life in the first two games against Minnesota, they followed up with two walk-off losses and a blow out in Philly. The two hosts talk about the trade deadline, give roster analysis, debate on who should stay, who should go, and tons more. This was an action packed episode that you don't want to miss!

When you thought things couldn't get worse, they did. The New York Yankees had a very unsuccessful week which included getting swept by the Boston Red Sox at home (first time in ten years). Cole and Luke are very angry. They are even questioning if the Yanks will crack a Wild Card spot. In this episode, the two enraged hosts broke down each game from the past week (including umpire rants), took a deeper look at the Yanks' recent failures, and previewed the upcoming matchups. Definitely give this is a listen if you like angry Bronx Bomber fans.

From one of the most exciting weeks to easily one of the more depressing. Cole and Luke break down the disappointing week with game analysis, talk injuries, preview the upcoming (important) divisional games, and much more! Don't miss our reactions!

What a week to be a Yankee fan! In an all new episode of Monument Bark, hosts Cole Weintraub and Luke Profaci talk about the fantastic pitching performances (including Corey Kluber's no-hitter), all of the walk-off wins, Gleyber Torres' offensive rampage, more trade targets after the Hicks injury, and much more! You do not want to miss this exciting episode!

Cole and Luke are back to talk Yankee baseball. Despite Sunday’s brutal loss to Baltimore and Luke’s spoiled milk disaster, the New York Yankees did their business winning their first series at Tropicana Field in two years. The two hosts analyze the successful week, speak on Aaron Judge’s hot streak, and potential trade targets following a lack of production and injuries early on in the season.