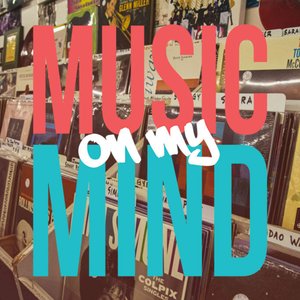 Music on my Mind

A podcast for discussions around music and mental health 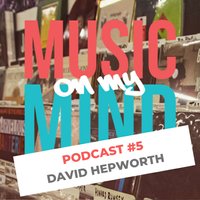 Music on my Mind - David Hepworth

For our fifth podcast we were pleased to be joined by author and broadcaster David Hepworth. We chat about his new book (‘Overpaid, Oversexed and Over There’), his popular Word in Your Ear podcasts and videocasts, the ways technology has shaped the way we consume and identify with music (“We’ve all got the same record collection nowadays”) and the perils of buying records after the pub.With the recently launched Apple TV+ series ‘1971: The Year That Music Changed Everything’ – based on David’s acclaimed book, we also discuss some of the exceptional albums that were released that year, the pleasures of digging out old records during lockdown and how “popular music is all about hair when you come down to it”.To accompany the show, we have compiled this exclusive playlist for your enjoyment - https://open.spotify.com/playlist/24asohBbyyaYWRzzuJEUcJ?si=fc772575e6f541acwww.davidhepworth.comWord In You Ear www.wiyelondon.comDavid’s biog:David comes from Yorkshire and worked in a London record shop in the 70s. At the same time he started writing for music papers. After a year with an independent record company he started writing and editing full-time. He joined Smash Hits in 1979, not long after it launched, and became the editor. He then went on to oversee the launch of magazines like Just Seventeen, Q, Empire, Mojo, More and Heat in the 80s and 90s. At the same time he was also broadcasting for the BBC. During the Live Aid concert of 1985 he was sworn at by Bob Geldof in front of what was then the world's largest TV audience, an incident which has now turned up in Britain's favourite film. He writes about radio and podcasting for the Radio Times, blogs here and podcasts there. His books "1971: Never A Dull Moment", "Uncommon People: The Rise and Fall of the Rock Stars" and "A Fabulous Creation" are all Sunday Times best-sellers. 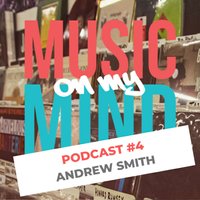 Music on my Mind - Andrew Smith

This month Stuart and Guy are joined from sunny California by author, presenter and journalist Andrew Smith. We look at how music has continually inspired Andrew’s work, through his time as a music journalist, writing his bestselling Moondust: in Search of the Men Who Fell to Earth, then through to his recent Totally Wired: The Rise and Fall of Josh Harris and the Great Dotcom Swindle. Armed with a list of ten songs that have served to soundtrack his life, we discuss Andrew's career (with some surprising diversions along the way including living down the street from Bob Dylan when he was a toddler, auditioning for the Clash and interviewing Madonna!). Listen to Andrew’s specially compiled Spotify playlist here. https://open.spotify.com/playlist/0sQq6t0JA7Mm4wot8oZNY8?si=d56abef6592845a0 Find out more about Andrew’s work at andrewsmithauthor.com Biog:Andrew Smith was born in Greenwich Village, New York, to English parents. A spell living in San Francisco was followed by relocation to the Hastings in the UK, where school classmates at his comprehensive school included the artist Dinos Chapman and future Spice Girls/Pop Idol svengali Simon Fuller – who managed Smith’s sixth form band, but could do nothing to help them. After studying philosophy and politics at the University of York, he moved to London, where he worked as a van driver, in music stores and as a musician (at one point auditioning for The Clash), before finally submitting to his first love, which was writing. Starting at the music paper Melody Maker, he moved rapidly to The Face, Guardian, Sunday Times and Observer as a longform feature writer, but in 2002 left journalism to write his UK #1 and international bestseller Moondust: in Search of the Men Who Fell to Earth, which was nominated for two British Book Awards (including Read of the Year) and chosen by the Times as one of its “100 Best Books of the Decade”. His most recent work, Totally Wired: The Rise and Fall of Josh Harris and the Great Dotcom Swindle, about the mysterious crash of Web 1.0, was Published by Grove Atlantic in 2019 and is currently being developed into a TV series by the actor/director Ben Stiller. His third book, Adventures in Coderland, about the micro-cosmos of computer code and this attempt to get inside it, will appear in 2022. Smith appears often on radio and TV and is the writer and presenter of films including the 60-minute BBC documentaries Being Neil Armstrong and To Kill A Mockingbird at 50. He currently divides his time between the San Francisco Bay Area and London, England. 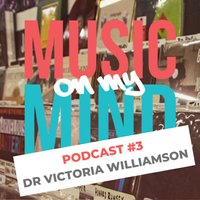 This month Stuart and Guy are joined by music psychologist Victoria Williamson to discuss the power of music and the amazing ways it can physically reshape our brains. In our chat we discuss the positive impacts of music on our mental and physical health, the musical genius of Brian Wilson and David Bowie, and the perennial puzzle of what causes ‘earworms’. Victoria also talks us through the songs that inspired her own personal playlist - exclusively compiled for this show and which you can enjoy in the link below.Victoria's Spotify Playlist - https://open.spotify.com/playlist/4D2viki23HGMgTNB0ogt9b?si=dbdb84c9ef4b46a7Playlist blog post - http://musicpsychology.co.uk/10-records-music-from-my-life/Dr Victoria Williamson is an independent authority, scholar and consultant on the psychology of music; how music is processed by the brain and the ways in which music impacts on our minds and behaviours.Victoria was most recently based in the music school within the Lucerne University of Applied Sciences and Arts in Switzerland, though her research and teaching interests cross the interdisciplinary boundary between music and psychology. She is trained in both academic disciplines having completed her Masters in the Psychology of Music at Sheffield and her PhD in the Psychology of Musical Memory at the University of York (2008). Victoria has published research looking at multiple aspects of music understanding and impact, including memory skills, brain activations, sleep and wellbeing. Her work has been covered widely in international media including by the BBC, TED, the Conversation and the Wall Street Journal, and she has given presentations to worldwide universities, festivals, medical professionals, public groups, radio and TV, and schools. She is the author of 'You Are The Music' (Icon Books) and the webmaster of the popular educational blog http://musicpsychology.co.ukMusic on My Mind is a project that aims to connect people through their shared love of rock and pop music and encourage positive discussion around men’s mental health. The project is supported by the National Lottery Community Fund and led by Reel Connections in partnership with Norfolk Library Service and the 12th Man, a campaign that aims to help all men talk more openly about mental health. 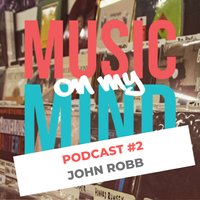 Music on my Mind - John Robb

Music on My Mind podcast #2 John RobbOur second episode features musician and journalist John Robb in conversation with hosts Stuart Hobday and Guy Martin. The discussion covers everything from the emergence of punk to the power of music journalism and the contemporary music industry, with nods to glam rock, the merits of the Fender Telecaster, and Jeff Wayne’s War of the Worlds along the way. You can find out more information on this, and our forthcoming podcasts at https://reelconnections.co.uk/projects/#momm John is the award-winning indie music mainstay, frontman of punk rock band Goldblade and bassist and vocalist in post punk band The Membranes. He is the author of a number of best-selling books including The Stone Roses and the Resurrection of British Pop, and Punk Rock – An Oral History.John is a journalist, TV presenter, regular TV and radio pundit as well as the boss of one of the UK’s top 5 music culture websites ‘louderthanwar.com’. He was the first person to interview Nirvana and The Stone Roses and invented the term ‘Britpop’. John Robb is the co-curator of Louder Than Words Festival.Music on My Mind is a project that aims to connect people through their shared love of rock and pop music and encourage positive discussion around men’s mental health.The project is supported by the National Lottery Community Fund and led by Reel Connections in partnership with Norfolk Library Service and the 12th Man, a campaign that aims to help all men talk more openly about mental health. John’s Spotify PlaylistTo accompany the show, John compiled this very special playlist for our enjoyment.https://open.spotify.com/playlist/2nbbWm97Yr9sss0EVldFmX?si=psoAutLiSuWmiTFpFT7uIgLouder Than Warhttps://louderthanwar.com/ 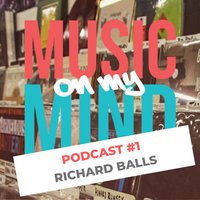 Music on my Mind - Richard Balls

Music on my Mind This first episode features Author Richard Balls in conversation with our hosts Stuart Hobday and Guy Martin. The episode, like Richard's books, focuses on Shane MacGowan and the Pogues, Ian Dury, and Stiff Records. You can find out more information on this, and our forthcoming podcasts at https://reelconnections.co.uk/projects/#momm Richard Balls is the author of Sex &amp; Drugs &amp; Rock ‘n’ Roll: The Life Of Ian Dury, Be Stiff: The Stiff Records Story and A Furious Devotion: The Life of Shane MacGowan (due to be published in autumn 2021). He was a journalist for 20 years, including nine working for national newspapers in Ireland, and in 2007 he moved into communications. He lives in Norwich with his wife and two daughters.   https://twitter.com/RichardBallsRichard’s Spotify PlaylistFor our first Music on My Mind podcast, author Richard Balls put together this brilliantly eclectic playlist for our enjoyment. https://open.spotify.com/playlist/2sfTlSvBLIHRFY7AKGZAtI?si=m0Y9vlDnSh2ihEdnfvz9-gCrock of Gold: A Few Rounds with Shane MacGowanhttps://www.imdb.com/title/tt11778272/Film now available on Amazon Prime VideoThe Irish Rover - The Pogues &amp; The Dublinershttps://www.youtube.com/watch?v=cZXnJ4UYh40Music on My Mind is a project that aims to connect people through their shared love of rock and pop music and encourage positive discussion around men’s mental health.The project is supported by the National Lottery Community Fund and led by Reel Connections in partnership with Norfolk Library Service and the 12th Man, a campaign that aims to help all men talk more openly about mental health.

© 2020 OwlTail All rights reserved. OwlTail only owns the podcast episode rankings. Copyright of underlying podcast content is owned by the publisher, not OwlTail. Audio is streamed directly from Reel Connections servers. Downloads goes directly to publisher.