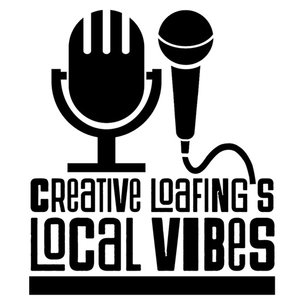 Local Vibes is the first podcast dedicated solely to local music in the Charlotte, North Carolina, area. Each week, hosts Mariah Scott and Ryan Pitkin kick back with a different Charlotte musician and play some tunes. We talk music, we talk about the local scene, we talk everyday life in CLT.

In the lead up to Hurricane Florence, we hunkered down in the Hygge West podcast studio to talk to Matt Hylom about his new banger, "Headspace," his new approach to releasing music and why you've definitely heard his music whether you know it or not.

Between their punk band, Self Aware Records and the Lunchbox Records store, the guys from Late Bloomer have their hands in a lot of facets of the local music scene. Josh, Neil and Scott sat down with 'Local Vibes' to talk mostly about the band and their new release, Waiting, out this Friday. We chat about what's changed in the four years since their last release, and what's stayed the same.

A whole 52 episodes! By our horrible math that means we've been up to this Local Vibes thing for a year. To celebrate, we brought in local favorites Dollar Signs — or three of them, anyway — to discuss open mics, anxiety, and the new album, This Will Haunt Me.

You've seen her at Made From Scratch Fest. You've seen her on the cover of Creative Loafing. Now hear her story on Local Vibes, as up-and-coming soul singer Cyanca [right in picture] blesses the booth alongside her friend and manager, Meg Wolford [left], whose poetry skills are featured on a track that she shares with Mark [center]. Cyanca discusses her inspirations — both personally and artistically — and her friendship with local favorites like Elevator Jay and Lute.

It's been a week of birthdays for Josh Higgins, founder of Refresh Records. Fresh off celebrating his 34th birthday, he's heading into a weekend of shows to celebrate Refresh's third anniversary.  Ryan and Josh talk about Josh's 20 years in the music business what it takes to run a local record label, the vinyl revival and more. They touch on a slew of Refresh acts, from former signings like Holy Ghost Tent Revival and Scowl Brow to current roster artists like Junior Astronomers and Cuzco.

In the lead-up to his performance at Charlotte Pride, Dexter Jordan stops by to talk to Ryan and new co-host Mariah Scott about the loss of his mother, "Hello, New Me," and what comes next.

In this week's special episode, we brought in organizers behind two upcoming Charlotte hip-hop festivals — artist Dammit Wesley with The Black Mecca and rapper Seph Dot with Bush Fest.  We talk to the two about what it takes to put on a successful show, what to expect at their respective events and the question on everyone's mind: Who are the Bushes?

Fresh off the Hog Happenin' festival in Lincolnton, Adrienne Nixon Basco of Tombstone Betty dropped in to the Hygge West podcast studio to chat about the band's new album, being a black front woman in a Southern rock band, her connection to biker culture and much more.

It's a family affair on this week's episode of Local Vibes, as co-host Mariah Scott's brother Tim Scott comes through to talk about his role as artist-in-residence at Charlotte Center City Partners, for which he's serving as music curator for the upcoming Soul Junction Charlotte festival.  And of course, we also discuss the local music scene and bump some tunes from Harvey Cummings, Arsena Schroeder and The Hamiltones.

We've reached the half-century mark, so we brought in the big guns straight from L.A. Up until 6 months ago, A. Styles and DJ Complete were a pair split between coasts. Early this year, Complete made the move out from CLT to Los Angeles to join the other half of his electronic hip-hop DJ duo, but while they were recently in town for a homecoming show, Ryan sat down with the both of them to talk about their come up through plenty of PBR burps.

The boys from Hectorina were gracious enough to spend a Sunday morning with us directly following an album release party for their new album, Muck, at Snug Harbor, so we've got to hand it to them for even showing up. We talk with Dylan, John and Zach about their fourth full-length release, the Charlotte scene and what's changed since the Over Easy Breakfast Machine.

One of Charlotte's most popular singer/songwriters, Lisa De Novo has been working the open mic scene in the city for five years. Now you could say she runs that scene. She came by the Hygge West studio to chat about her newly released album, The Big Bang, her involvement with Girls Rock CLT and how her communications degree helped her build a name for herself in the Queen City.

Three days from playing their last show together as members of Mineral Girls, the band's vocalist/guitarist Brett Green and guitarist Audrey Ayers came in for a long chat with Ryan and Mark that covers everything from the ups and downs of their recent tour to future plans for both of them. That's not to mention stories of all-nighters at the casino, fights amongst the band and someone admitting to being on acid for the whole damn podcast.

The first time Tony Potts performed on stage, he was 8 years old and kicked Freedom Williams part in C+C Music Factory's "Gonna Make You Sweat." The experience inspired the Charlotte native to pursue a career in hip-hop as Phaze Gawd. When Williams reached out to us recently to say he'd read Tony's story in Creative Loafing and wanted to meet him, we were more than happy to oblige — with the help of Tizzy of Th3 Higher and Yo CLT Raps. We set up a surprise meeting and the rest is history...

For the 41st episode of the podcast, Ben and Chris of the Wormholes came and kicked it in the lead-up to their May residency at Snug Harbor. We talked about — and followed along musically with — the band's transition from a more traditional rock sound to their newer synth-based space electro-alternative vibe.

Ahmir the King is growing up right before our eyes. On episode 40, the 19-year-old whom CL named Best Up and Coming Rapper in last year's Best of Charlotte issue is ready to release some new, more developed material, and he brought some along to play on our podcast.  He also brought along the squad: his brother, Fresco and Orpheus, both local rappers who have come up with Ahmir since high school — and earlier than that in the case of Fresco, his older brother.

Mark takes the reins in this episode and brings in a group of talented experimental artists to talk about their genre-bending ways. He's got Angela Saylor aka Minthill, Lenny Muckle aka Lofidels, Bo White of Patois Counselors and Brent Bagwell of Ghost Trees.

Spring may not seem like the right time to bring in Autumn Rainwater, but there's never a bad time to catch up with this local R&B sensation. We talked to Autumn about last year's release, Leaf, and whether all these connections to nature are purposeful. We also discussed the local R&B scene, dating stoners and why friends are weary of leaving her a voicemail.

Shame on us for going 35 episodes without bringing a female rapper into the studio, but we couldn't think of a better guest than LaLa Specific to break us out of that drought. LaLa put up with Ryan's horrible puns to discuss her style (or styles) and the UNC Charlotte cypher world while taking us through a timeline of her bangers.

It was a long road for guitar virtuoso Vadim Kolpakov to go from the small Russian town of Saratov to Boston to Charlotte, but we're glad he took it. He brought his seven-string guitar and his nephew Sasha, the other half of his groups, VS Guitar Duo, to play us some tunes in person. We also discussed how Vadim found himself playing for millions on tour with Madonna and why, despite the use of the word to describe his music, terms like "gypsy" and "nomad" bother Kolpakov and other Romany people.

© 2020 OwlTail All rights reserved. OwlTail only owns the podcast episode rankings. Copyright of underlying podcast content is owned by the publisher, not OwlTail. Audio is streamed directly from Creative Loafing servers. Downloads goes directly to publisher.