Using President Calvin Coolidge's barometer for governmental do’s and don’ts, we’ll dive into today’s most important issues and chat about how Silent Cal might have handled them. The Coolidge Way is a production of The Calvin Coolidge Presidential Foundation. 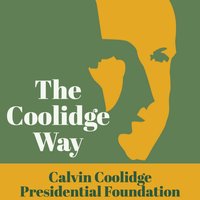 On this episode of The Coolidge Way, we’ll dive into a topic from his presidency that couldn’t be more contemporary—budget and taxes. Taken together, these issues were top priorities for the Coolidge administration. To help us navigate these complex policies, Governor Jim Douglas is joined by Steve Forbes, Editor-in-Chief of Forbes Media.

Part two of our three-part series on the Life of Calvin Coolidge delves into Coolidge’s rise to national prominence after the Boston Police Strike of 1919 as well as the struggles Coolidge encountered after he made it to Washington. To discuss one tragedy in particular—the death of Coolidge’s son—we are joined by Coolidge descendant and Coolidge Foundation trustee Jennifer Coolidge Harville. Together with Governor Jim Douglas, Harville explores how the loss affected Coolidge, and how he managed to triumph despite it.

This is the first of a three-part series exploring the life of Calvin Coolidge. How did Coolidge go from a boy on a rural Vermont farm to the highest office in the land? We'll explore how—and why—in this series. This episode takes us from Coolidge's birth in Plymouth Notch, Vermont to his successful handling of a crisis as the Governor of Massachusetts. At the end, host Governor Jim Douglas speaks with special guest Craig Fehrman, author of Author in Chief: The Untold Story of Our Presidents and the Books They Wrote. Fehrman and Douglas discuss how Coolidge’s upbringing shaped one of his most important skills as a leader: writing.

Marijuana, drugs and alcohol in Coolidge's day--and now -- are the topic of this illicit episode. We'll even cover the president's  personal experiences with those same substances---including, believe it or not, COCAINE.

The Importance of History Education

The benefits of a solid knowledge of the past is something every citizen can learn.  The victories, the defeats, the mistakes, even the relationships!  They are all a shining example that today’s citizens can use to create a better world.  And it all starts in one primary location – the classroom.

Transitioning from one White House administration to another has always been a tricky process, and some are a little more difficult than others as we just experienced.  With so many questions, we can thankfully look to our 30th President for a little guidance and perspective.  Our discussion about Political Civility is on this episode of The Coolidge Way