The Dabghanistan Podcast - Our View From Stage Right. With hosts Warren Lee and David Bonvillain talking to some of the most iconic and legendary people in the music and cannabis industries.

The Dabghanistan Podcast - Our View From Stage Right. With hosts Warren Lee and David Bonvillain talking to some of the most iconic and legendary people in the music and cannabis industries.

Updated by OwlTail 8 days ago

In this episode we do a deep dive on Stef's tone, gear, guitars and background. We talk about the new Deftones album, releasing new music during a pandemic and a bunch of Deftones history.

In part 1 of our interview with musician and published author Jeremy Wagner, we get into the horror scene and what it takes to be an established author in the genre. We talk about his musical influences and background and take a deep dive into his and Dave’s mutual love for the movie Crossroads…no, not the Brittany Spears one. 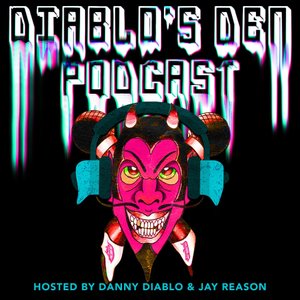 Rank #3: E8 : S1 Living the Dream with Mike DeLeone from Philip H. Anselmo and The Illegals

Read more
In this week's episode we had the great pleasure to chat with one of metal's friendliest faces and all around shredders "Metal Mike" DeLeon. Mike talks about his earliest introductions to music, when starting at age 4 his Dad took him to see concerts like Stevie Wonder, David Lee Roth, and Steve Vai!! Mike fills us in on all the details necessary to make it from fanatical metal fan mexican kid in Texas to playing on stage in front of 50k people on his first trip out of the country! He recalls the tale of meeting Kerry King for the first time and being given the opportunity to shred KFK's rig, an opportunity he took FULL advantage of... unlike our "classically" trained co-host when he was given his first chance. Finally, Metal Mike updates us on new music from his band Flesh Hoarder, as well as gives us the very inside story as to what finally convinced his other project, Philip H Anselmo and the Illegals, to start covering Pantera songs for the first time, giving fans something they have so desperately wanted!

In this episode we chat with theNY Hardcore legend and bassist of Madball - Hoya Roc. Hoya runs us through both his touring and recording setup, his songwriting process, including insider tips for writing a hardcore anthem to hip hop beats, and even declaring proudly at one point, "I got 9 albums on 2 STRINGS!" A true selfmade hardcore band, he shares a few amazing tour stories, and Hoya implores us all with one story... not to visit Tijuana. The stories and laughs continue until a -- shall to remain nameless co-host -- throws in a random broken appendage anecdote which catches everyone off guard.

In this episode we catch up with Frank Bello from Anthrax. We talk about tour life, performing, the Big 4 shows, upcoming projects and much more from this legendary Anthraxian.

Whether with his music, his art, or his entrepreneurship – Johny Chow puts it all on the table and brings 100% every single time. In this episode we talk with Johny Chow from Stone Sour about the fluid thinking required and unenviable task of doing what it takes to be a successful restauranteur/entrepreneur. He explains the power of street art, learning to follow your muse and details his six degrees of separation with the Goo Goo Dolls, Linkin Park and...the Backstreet Boys?!?

On this episode we swap tour stories with the hilarious and humble Mark Morton as Dave tries to convince Mark of his status as a modern guitar hero. Mark catches us up on all things Lamb of God, releasing an album during a pandemic, songwriting processes, music theory and simply feeling the solo. Mark talks about his inspiration for his solo projects, turning his buddy from a 9-5 family man into a touring guitar tech, his acoustic guitar work, and even shows us some of his personal axes in his office.

On this episode of the Dabghanistan Podcast - We talk to Jack Gibson from Exodus on his formal musical training, what it’s like being a stoner metal legend in Nashville and the country music scene, recording tech and the bay area thrash scene. We take a tour of some of his personal axes in his home studio, talk gear, get a banjo jam straight outta Coffin Hunter, swap stories from the road and get some skinny on the forthcoming Exodus record!

On Episode 2 we talk with Chuck and Tiffany Billy about their COVID experience, what it takes to stay together for 31 years and the decades of adventures on the road. Chuck also gets into his work on the new Lamb Of God single, his battle with cancer and his ability to fight off sickness with spiritualism. Another behind the scenes look into the life of another Bay Area Legend!

Our first show has Bay Area Thrash Metal Legend Will Carroll from Death Angel discussing his battle with COVID-19, his out of body experience as he danced with death while in a coma, and the effectiveness of the ball-peen hammer as a defensive mechanism. We talk about how he started studying music, playing drums, his love of KISS, and playing on stage since high school with some of the scenes most legendary bands. We set the record straight with FOX News, put to bed the media-induced drama with another Bay Area legend and friend of the show - Chuck Billy...and for God's sake, don't touch Celine Dion's chocolate!!!!