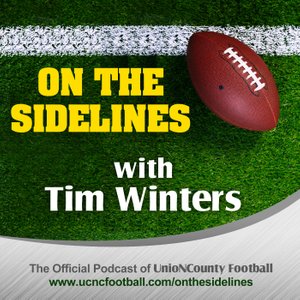 The #1 online source for football information in Union County, NC now has a podcast. On The Sidelines is your direct link to the best interviews of student-athlete football players, their coaches, and industry insiders. Listen in to hear players, coaches, recruiters, nutritionists and coaches specializing in skill areas that make our players better on the field and better students in the classroom. 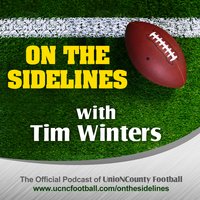 Carter Helms graduated Piedmont High School in 2013. He spent one year with his alma mater as coach before jumping to Sun Valley High School to coach. Listen to Helms recall his playing days at Piedmont and his scouting report of the 2015 SV Spartans.

Ross Rushing, a graduate of Metrolina Christian Academy, is entering his senior year at Bridgewater College. Rushing is looking to follow up on an impressive high school playing career as a quarterback by leading Bridgewater to a championship season.

Mike Stricker is the Founder/President of Dynamic, a community sports outreach organization. In this episode, we will find out how Stricker and his company empower student-athletes to reach their God-given ability.

On The Sidelines today is Michael Clark, a Regional Recruiting Analyst covering North Carolina, South Carolina and Virginia for Scout.com.   In this episode, Clark provides insight into the recruiting process and provides analysis of some of our top county prospects including Austin Kendall, JT Cauthen and Emeka Emezie.

OTS 013: Nick Vagnone, Charlotte 49er and a student of the game

Nick Vagnone is a2014 Porter Ridge graduate and now a redshirt freshman with Charlotte 49ers who eats, breathes, and lives football- a true student of the game. In this episode, Nick is full of great stories that take you back to the games, players and coaches that made the Porter Ridge football program revered throughout the state.

Sam Mobley was a dynamic playmaker while at Parkwood high school- 27 career touchdowns, 22 TD coming from his primary position of wide receiver where he pulled in 115 career receptions for 2,034 yards.

Leland Hammonds is a professor and personal trainer. Hammonds is passionate and motivated  about strength and conditioning and nutrition for student-athletes and the general population.

On The Sidelines with Turner Schwartz, who played four years of varsity football at Marvin Ridge High School as a defensive back and quarterback. Ranked 4th in his class with a weighted GPA of 5.2, Turner received the Charlotte Touchdown Club’s Student-Athlete of the Year award earlier this year. A member of the National Honor Society and a team captain, Turner will play football and attend John Hopkins University in the fall.

Tripp Roakes a born and bred North Carolinian, who has dedicated a good part of his professional life to advocating for student-athletes through his South Charlotte Sports Report newspaper, website and social media feeds.

Glenn Deveaux talks about the game that has given him so much. The owner of Camp Lineman talks about teaching, coaching and elevating the student-athlete on and off the field.

© 2020 OwlTail All rights reserved. OwlTail only owns the podcast episode rankings. Copyright of underlying podcast content is owned by the publisher, not OwlTail. Audio is streamed directly from Tim Winters servers. Downloads goes directly to publisher.