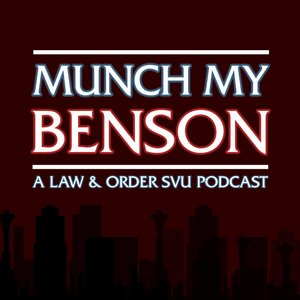 Munch My Benson, the seminal SVU podcast, is the twisted spawn of co-hosts Adam Schwitters and Josh Duggan, celebrating the splendid and often wildly inappropriate lunacy found only on Law &amp; Order: Special Victims Unit. Each week The Randomizer spits out a new episode, and they dive deep into the heinous murk before rating it in terms of overall quality, guest star performances, the degree to which the episode was problematic (the more, the better), and the depth and breadth of lives ruined (more=better). So come along for a wild ride through the uproarious darkness of the Dickwolfiverse. 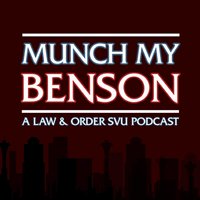 As always, Law and Order: SVU manages to make a heartbreaking story ("Closet" S9E16) of one man's loss of his husband, his career, his brain function, and his celebrity into fodder for the Munchmill. We discuss our least favorite Oscar winners, lament the demise of office culture, shine the spotlight on a particularly bad grandpa, and spend entirely too much time discussing a character that is never seen nor directly heard from in the episode. Please rate and review and support other Indie Podcasts! Sources: Jennifer Decker’s link to AJ Daulerio’s apologia - Twitter Music: Divorcio Suave - “Munchy Business” 14:32 - James Carr - "You Got My Mind Messed Up" from You Got My Mind Messed Up (1967) 33:14 - Hank Williams Jr - "Are You Ready For Some Football" from Best Of - All My Rowdy Friends (2012) 50:02 - Propellerheads featuring Shirley Bassey - "History Repeating" from Decksandrumsandrockandroll (1998) Next Week’s Episode: Season 21, Episode 13 "Redemption In Her Corner"

What happens when a new showrunner takes over Law &amp; Order: Special Victims Unit and doesn’t understand the characters at all? Or how SVU tells stories? Well, the Randomizer selected “Gone Fishin’” (Season 19, Episode 1), so the Munchie Boys found out the hard way. Fin kidnaps a perp who absconded to Cuba? Dean Winters and Peter Jacobson coexist in an episode where Jacobson isn’t Bart Ganzel, Cassidy’s pimp employer from the Cragen waking up with a corpse in his bed three-part saga, challenging the strength of the space-time continuum? How ridiculous can a soundstage set that’s supposed to pass for Cuba get? The answers to these and so many other befuddling questions lie within the confines of this installment of Munch My Benson. Music: Divorcio Suave - “Munchy Business” 17:20 - Lena Horne - “Honey in the Honeycomb” from Cabin in the Sky (1943) 28:51 - Frank Sinatra - “Love and Marriage” from This Is Sinatra! (1955) 44:00 - Walter Smith III - “Goodnight Now” from Still Casual (2014) Next Week’s Episode: Season 9, Episode 16 “Closet” 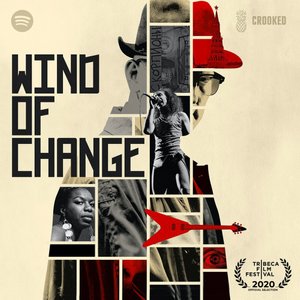 This week the Munchie boys watched "Counselor, It's Chinatown" (S21E7), a wildly inappropriate Law and Order: SVU, which has Josh and Adam careen from such wildly disparate topics as: Is noted scumbag Chris D'Elia is a cardigan guy? Which professions suffered most during the Chinese Cultural Revolution? And, does the NYPD have an undercover dog requisition service? We'll rub and tug our way to the bottom of these and many, many more questions. Sadly, due to climate change, there is a lot of Max on this one. Further Reading: Massage Parlors with 'Happy Endings' Give These Sex Workers a Decent Living by Hallie Lieberman - Vice Exodus Road Denies Allegations of Sexual, Financial Misconduct by Heidi Beedle - Colorado Springs Indy Music: Divorcio Suave - “Munchy Business” 10:27 - Jerry Goldsmith - "Theme From Chinatown" from Chinatown (1974) 28:09 - Dennis Cockrum - "Baby Merchant" from Cop Rock (1990) 58:10 - The Cyrkle - "Squeeze Play" from The Minx (1970) Next Week’s Episode: Season 19, Episode 1 "Gone Fishin'"

56 - She Just Wanted to Get Sticky Fingered

When questions like “If I die, and there’s a hot tub, can I be made a saint?” get posed, you know things got weird. This installment in Munchstory has Adam and Josh covering “Streetwise” (SVU - S9E11) like a blanket on a mattress--or a high society douchebag, apparently. This episode of Law &amp; Order: Special Victims Unit has it all. Mae Whitman going from glitz to gutter and back again. STUNTS! Adam Beach. A bum family complete with a pretty messianic, serial killing, cult leader dad who isn’t afraid to go big. True Munchies will enjoy the diversions through high society, defunct Swedish automotive companies, the conditions necessary for beatification and the Christianization of the Welsh, defunct NYC music institutions, the nature of paintball, and much, much more. Source Material: “What Are Three Teenagers Supposed to Do When the FBI Raids Their House” by Kathleen Garrett - Zocalo Public Square “I Could Never Talk to My Dad About How I Saved Him from Prison” by Kathleen Garrett - Zocalo Public Square Paintballs 101: Everything You Need to Know About Paint - Paint the Competition Arlington Mom Who Cried Rape Gets Five Years in Slaying - Fort Worth Star-Telegram Music: Divorcio Suave - “Munchy Business” 10:35 - Darryl Hall &amp; John Oates - “Rich Girl” from Bigger Than Both of Us (1976) 37:54 - Shonen Knife - “Riding on a Rocket” from Let’s Knife (1992) 44:45 - Simon &amp; Garfunkel - “The 59th Street Bridge Song (Feelin’ Groovy)” from Parsley, Sage, Rosemary and Thyme (1966) 1:00:20 - Mike + The Mechanics - “All I Need Is A Miracle” from Mike + The Mechanics (1985) Next Week’s Episode:  Season 21, Episode 7 “Counselor, It’s Chinatown”

*Note: I originally uploaded an unedited version of this episode in a delirious state. True Munchheads should consider re-listening to get a sense of the hours we pour into making the dumbest Law &amp; Order SVU podcast out there.  What do the business of sports, Adam's email inbox, Stockton California pizza chains, and the contents of Amanda Rollins's stately pleasure dome have in common? Well, they all come up in our especially tangent prone rundown of "Hunt, Trap, Rape and Release" (S22E7) Munch My Benson's first taste of SVU Season 22. Along the way, we rate the loudest blouses in SVU, the greatest challenges in home laundry, and the least believable cast members of Law &amp; Order: Criminal Intent among many, many other topics. Articles: From Aggressive Overtures to Sexual Assault: Harvey Weinstein’s Accusers Tell Their Stories - The New Yorker Music: Divorcio Suave - “Munchy Business” 11:39 - Jesse Jaymes - "Go New York Go!" from Go New York Go (1994) 31:37 - Stevie Wonder - "Jungle Fever" from Jungle Fever Original Motion Picture Soundtrack (1991) 1:06:17 - KRS-One - "Sound of da Police" from Return Of The Boom Bap (1993) Next Week’s Episode: Season 9, Episode 11 "Streetwise"

The most beautiful thing about Law &amp; Order: Special Victims Unit is that it’s provided a truly insane platform for some of the most inspired stunt-casting in television history. Not only is “Slaves” (Season 1, Episode 22) a sterling example of what SVU can do in this arena; it’s the first foray into this realm for the show and blazed a helluva trail for any who followed this Brat Pack star. If you didn’t know you needed to see your beloved lead from Mannequin and Weekend at Bernie’s Andrew McCarthy portray an exacting maniacal sadistic sexual psychopath, take our word for it, you need to see it here. Come and check out Andy Mac’s Crash-parry in the McCarthy/Spader kink-off to catch some next-level insanity. This is MUST-WATCH SVU. Articles: Kidnapping of Colleen Stan - Wikipedia Infamous Red Bluff kidnapping case sees new development - Redding Record Searchlight Girl in the Box Speaks: How I Survived My Seven-Year Ordeal - People Music: Divorcio Suave - “Munchy Business” 17:35 - Blake Babies - “Girl in a Box” from Sunburn (1990) 37:13 - Starship - “Nothing’s Gonna Stop Us Now” from Mannequin (1987) 45:29 - The Fatima Mansions - “Blues for Ceauşescu” from Viva Dead Ponies (1990) 1:17:40 - Arcade Fire - “Neighborhood #3 (Power Out)” from Funeral (2004) Next Week’s Episode: Season 22, Episode 7 “Hunt, Trap, Rape and Release”

Law And Order: SVU is often salacious and upsetting and certainly problematic, but rarely does an episode (Brotherhood S5E12) reference foreign object anal penetration a whopping 22(!) times. Obviously, for the love of all things good, please be warned that we will be talking A LOT about that triggering subject. Of course we will also be discussing exotic woods, waste water treatment facilities, Lutheran traffic patterns, Josh's COVID scare (he's negative), and Adam's salad days. You're not going to forget this one anytime soon, and you will NEVER look at a wooden handle the same way again. Music: Divorcio Suave - “Munchy Business” 17:09 - Lou Reed - "How Do You Think It Feels" from Berlin (1973) 36:13 - Virna Lindt - "Underwater Boy" from Shiver (1983) 53:07 - Bob Wills And His Texas Playboys - "Ding Dong Daddy (From Dumas)" from Ding Dong Daddy (From Dumas) (1937) Next Week’s Episode: Season 1, Episode 22 "Slaves"

When proceedings kick off with a pooch gleefully dragging discarded afterbirth down the sidewalk, you know you’re in for something special. “Taboo” (S7E14) delivers on that opening promise, proffering some of the wildest, most disgusting things seen in the Munchie annals. As Adam and Josh frolic through the filth, they talk pseudocyesis, the history of Bellevue, bus fight Twitter, and the epidemic of incest in the U.S. And speaking of incest, wow, does this installment of SVU find a way to make something already SUPER disturbing mindblowingly revolting. This episode is so nuts, you’ll feel the Unit needs to interview you afterwards. Hold onto your butts coz this one is BONKERS. Sources: Cryo-Cell International: Is Placenta Stem Cell Banking Worth the Hype? NIH - National Library of Medicine: Endocrinology and Physiology of Pseudocyesis The Atlantic - America Has an Incest Problem Music: Divorcio Suave - “Munchy Business” 22:16 - The Sugarcubes - “Birthday” from Life’s Too Good (1988) 35:17 - The Shirts - “Laugh and Walk Away” from Street Light Shine (1979) 51:28 - Chicago - “Baby What A Big Surprise” from Chicago XI (1977) Next Week’s Episode: Season 5, Episode 12 “Brotherhood”

While we felt like the title of SVU Season 8, Episode 22 "Screwed" was a little on the nose, it did provide ample ground for the usual Munchie business. We brainstorm a potential series of extreme #Beachhead fanfic, Adam casts his dog's voice actor, and Josh proposes an elaborate conspiracy by the show runners against their own cast members. Enjoy! Music: Divorcio Suave - “Munchy Business” 13:30 - Mike Post and Pete Carpenter - "The Rockford Files" from The Rockford Files (1975) 38:50 - Randy Crawford - "Street Life" from Sharky's Machine (1981) 51:06 - Ulali and BC Smith - "Wah Jhi Le Yihm" from Smoke Signals (1998) Next Week’s Episode: Season 7, Episode 14 "Taboo"

Strap in for a wild ride, Munchies. This episode of SVU—”Ritual” (S5E14), featuring Emmy-winner Michael Emerson—starts in a park with an apparent ritual sacrifice and dives head first into the world of child slavery, complete with a Fin undercover op and possible Upper East Side blue-hair slave auctions. Along the way, Adam and Josh practice Santeria, lament the stolen Elgin Marbles, assess what jewelry screams slave owner, and wonder what Adam’s glasses being donned by a gruesome murderer means for him. They also finally chat about the 1980 exploitation chase flick, Night of the Juggler. Music: Divorcio Suave - “Munchy Business” 17:40 - Richie Havens - “Follow the Drinking Gourd” from Songs of the Civil War (1991) 28:25 - Randy Edelman - “The Adventures of Brisco County, Jr. Theme” from The Adventures of Brisco County, Jr. (1993) 57:07 - Fela Aníkúlápó Kuti and Africa 70 - “No Agreement” from No Agreement (1977) Next Week’s Episode: Season 8, Episode 22 “Screwed”

© 2020 OwlTail All rights reserved. OwlTail only owns the podcast episode rankings. Copyright of underlying podcast content is owned by the publisher, not OwlTail. Audio is streamed directly from Munch My Benson servers. Downloads goes directly to publisher.