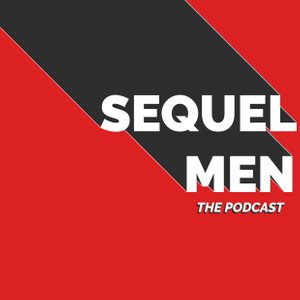 SequelMen: The Podcast takes listeners on an epic adventure through the good and the not so good film franchises. We will tackle the films through a funny and insightful lens while we take you through the plot and dissect various elements of it. Join us as we journey through the Hollywood you know and love. From Star Wars to Twilight, we cover it ALL!

Star Wars: Return Of The Jedi

We’re back, and we are ready to bring the original trilogy to a close. This one ties up loose ends, features non-incestual revelations, deaths we want and don’t, and one big celebration with teddy bear bands and storm trooper head drums. Join us on Endor and beyond as we look upon this film with our own eyes and bring balance to the Pod in 1983's Star Wars: Return Of The Jedi.

Strap in for the brilliance that is and always will be the start of the Star Wars Prequel Trilogy in the only way George knew how - lots of sand and Anakin. Love it or hate it, it’s still a part of the Skywalker Saga we love so grab a beer (or hard liquor) and listen to the tale that started it all...22 years after the one that started it all. Join us on the Podracing track as we explore the Saga's beginning in 1999's Star Wars: The Phantom Menace.

Star Wars: Revenge Of The Sith

The one that wraps it all up and answers every question you had whether you wanted it or not! We go in depth in an effort to achieve unlimited power and uncover the secrets of the Sith - The heartbreak, the emotional and final confrontation of a once bonded master and apprentice is all laid on the line. Join us as we force together loose ends and close out the original Star Wars Saga with 2005's Star Wars: Revenge of the Sith.

Star Wars: Attack Of The Clones

War! What is it good for? Apparently the last 5 minutes of this movie. We are heading to a planet erased from the archives for this one as we dive into the epic detective tale through rain, death arenas, clones for a minute or two and most of all, our favorite desert planet, Tatooine!  Join us in the new millennium as we discover the roller coaster ride that is 2002's Star Wars: Attack Of The Clones.

Consider this one a semi-finale. We are one episode away from the big one and man, what an episode this is, packed to the gills with forced love interests, side quest shenanigans, and a chase scene you won’t miss unless you don’t watch the movie. We are re-building the Jedi this week - Join us as we let the past die and get the tough answers to easy questions in 2017's Star Wars: The Last Jedi, as well as give you our predictions for tomorrow's release, Star Wars: The Rise Of Skywalker!

It’s back! The Star Wars franchise makes it’s triumphant return to the big screen after a decade in stasis! We get a Newer Hope and a bigger death star, we are introduced to brand new characters whom we love (or at least like a lot). Buckle up for a Falcon ride of emotions you won't soon forget and yet another adventure through the cosmos as we take a nostalgic trip with 2015's Star Wars: The Force Awakens!

Here comes the Spider-Man! That’s right - we are swinging full speed ahead into our next franchise and boy oh boy, is it a nostalgia fest.  Almost 20 years ago, a little radioactive spider changed the course of superhero movies forever and we are bringing you back to the turn of the millennium with this one.  Peter Parker may not vocalize much emotion (inside or out of his alter ego), but we sure do.  Join us as we dodge Gobby's pumpkin bombs and rescue some New Yorkers because when you mess with one of us, you mess with all of us in 2002's Spider-Man.

Austin Powers in The Franchise Wrap-Up

Very heavy, man.  Our mission with the Ministry of Defense has sadly come to an end as we wrap and "rap" the entire saga of Austin Powers.  What a ride it’s been through the 60’s, 70’s, 90’s and early 2000’s - we wouldn’t have had it any other way.  We talk best clothes, best lines, unveil our FIN scores, and reveal our brand new franchise!  You won't want to miss this, so join us as we swing from one franchise to the next in Austin Powers: The Pod Who Wrapped Me... or just Austin Powers in The Franchise Wrap-Up. This episode's Recap Rap features original music by Jiem EB Music. BOOM BAP RAP BEAT HIP HOP INSTRUMENTAL - "90's": https://www.youtube.com/watch?v=i8ksXib7cN8 For more great, original music from Jiem EB, please check out his page at https://jiemtracks.beatstars.com/!

Yeah baby, yeah!  Where we're going, we don't need sensical plot devices - Just enjoy yourself!  From 2002 to 1975, we join the International Man of Mystery himself as he goes back and forth through time to track down his kidnapped father and stop the notorious Goldmember and Dr. Evil from hatching their diabolical plan.  With a Hollywood budget, celebrity cameos,  a war chest of stale jokes, the Queen Bee herself, and a special treat to "Rap" up this trilogy, join us as we reach the conclusion of our own mission with 2002's spy comedy, "Austin Powers in Goldmember"!

An International Reassignment for the SequelMen of Mystery?

What's this?  Due to an international health crises, we've received word that we have been reassigned to a new franchise - one that hasn't been touched in almost TWO decades!  Join us as we take on this mysterious new film series and allow ourselves to reintroduce.... ourselves.

Lets go gambling! But with a twist, and another twist, and for good measure, a few more twists.  Our new mission commences as we kick off our very first 007 franchise with a bang!  With virgin eyes, we examine as Bond (...James Bond) finds his footing in tactical espionage action (emphasis on action) and false love stories you'll never see coming.  Join us as we eliminate the first of Bond's many foes in 2006's 007 relaunch - starring cinema's seventh Bond, Daniel Craig - Casino Royale.

We have reached the end of yet another treasured franchise... but before we say "so long partner", let’s have one last hootenanny with the roundup gang!  With fan questions, FIN scores, encores, and more, join us as we say farewell to the toys we've bonded with over the years and help us usher in the next franchise (with a mysterious new mission) as we put our final thoughts to rest on this iconic "Toy Story".

Just when you thought the Toy Story was finished... Just when you thought you’d seen the last of our beloved friends... Disney and Pixar nail us with a continuation we never needed - one we didn't even ask for, but got nonetheless.  Oh yeah, and we found Bo Peep and her three sheep, Bobby, Gus, and Lefty!  Join us as we meet new friends and say goodbye once more to the ones  we grew up with as we get lost in the (now) Academy Award-winning film and animation marvel, 2019's Toy Story 4!

Its the end of an era!  In the twilight of your teenage years, your toys and the memories you've made with them will always be there for you. This is a story packed with humor, emotion, and tear-jerking nostalgia that is sure to strike a chord with your heartstrings.  This film is as close to perfection as we’ve covered thus far, so strap yourselves in.  Please join us as we see Andy off to college and witness the toys we grew up with embrace a new life in Disney/Pixar's stunning finale - 2010's Toy Story 3!

If you thought The Empire Strikes Back was the sequel to end all sequels, wait until you witness this CG masterpiece!  From a simple moving truck to a passenger jet bound for Tokyo, the stakes are higher than ever... and toys are still alive!  Woody and Buzz meet new friends and new foes as they face the struggles of aging and forgotten fame.  Join us as we cross the street to Al’s Toy Barn because we're taking on 1999's critically acclaimed follow up to the beloved classic - Toy Story 2!

Let's go back to a simpler time, before smart devices and video games captured attention of children around the world.  A time when imagination was key to play time.  Also...toys come alive!  A story of discovering yourself and embracing your purpose in life, join us as we climb out of the toy box and into the moving van with Pixar's groundbreaking inaugural animated feature of 1995 - Toy Story!

As one franchise ends, a new one begins! In this episode, we hold a final roundtable discussion of the Star Wars franchise as we take an in-depth journey through the highs and lows of the Saga - including a deeper, in-depth discussion of The Rise Of Skywalker! Additionally, we finally reveal our FIN (Final Important Necessary) scores for each film and assign a score for the series as a whole. But wait, there's more! As an added bonus, we’ll reveal our highly anticipated next franchise as we say goodbye to the beloved franchise that lauched our show. Join us as we wrap it up and say goodbye to the galaxy far, far away - the 42 year spanning, cinematic Epic, Star Wars: The Skywalker Saga!

THE REACTION - Star Wars: The Rise Of Skywalker

At long last! We've reached the epic conclusion and invite you to join the SequelMen (alongside a couple of special guests) - post-premiere and recorded on location - as we discuss this tale of evil puppet masters, daring escapes, and unprecedented discoveries in the Force - Nothing is as it seems in the galaxy. It’s been an emotional ride, but every great story comes to an end. Tonight, we send our princess and the rest of the Skywalker legacy through the stars and pave the way for generations to come as we wrap up our journey through all 9 films of The Skywalker Saga with Star Wars: The Rise of Skywalker!

Star Wars: The Empire Strikes Back

This week, as promised, we bring you one of the greatest films ever made. One with heart break, cliffhangers, and a cinematic reveal of epic proportions, possibly the greatest ever to grace our screens. Join us on the Dark Side as we get frozen in carbonite in 1980's Star Wars: The Empire Strikes Back.

The SequelMen start strong with a franchise full of galactic struggles, cosmic destruction, far away planets, and heroes and villains we both love and hate. STAR WARS!! Join us for our maiden voyage through the stars with the one that started it all: Star Wars: A New Hope.

© 2020 OwlTail All rights reserved. OwlTail only owns the podcast episode rankings. Copyright of underlying podcast content is owned by the publisher, not OwlTail. Audio is streamed directly from SequelMen Productions servers. Downloads goes directly to publisher.