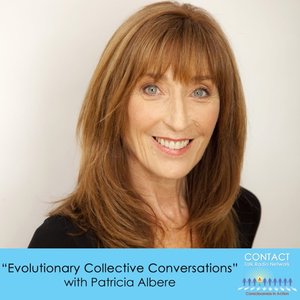 Evolutionary Collective Conversations is reaching an ever-growing audience of all ages, ready for what is emerging in collective consciousness, a new evolutionary wave helping us to discover & experience unity, creativity, and infinite possibilities for living from connectivity and oneness. Our format is unique - we combine what is cutting-edge & inspiring for the featured guest with Patricia's expertise to create a co-creative dialogue.

According to a recent survey by Pew Research Forum, over a quarter of Americans now consider themselves to be “spiritual but not religious,” which is an 8% increase from the last time the study was conducted 5 years ago. This data makes sense of what a lot of us are experiencing in our own lives. Traditional approaches to spirituality are less and less appealing, but the call of spirit is still active within us. Even as so much of the world seems to be trending toward the secular, spirituality just won’t seem to go away. In this episode of Evolutionary Collective Conversations, Patricia Albere will explore why spirituality is still relevant in today’s world, how it’s changing, and where the whole notion of spirituality is headed in the future.

Katie Hendricks: What is a Conscious Relationship?

When it comes to the increasingly popular field of “conscious” relationships, there may not be two more experienced individuals than Katie Hendricks and Patricia Albere. Hendricks has been a pioneer in the field of conscious loving for over 40 years and has published multiple bestsellers on the topic, including her latest Conscious Loving Ever After. Albere is a pioneering spiritual teacher who has developed a practice called “Mutual Awakening” in which individuals meet and relate from a place of non-separation. Two approaches to relationships, both conscious, both powerfully transformative. In what promises to be a dynamic and fruitful dialogue between two relationship experts, Albere and Hendricks will explore what new possibilities each are discovering in the field of relatedness. Just like technology is evolving at rapid speeds, so are the ways in which we relate to each other and the foundational consciousness that we share. Albere and Hendricks will survey and our current landscape of relatedness and peer forward, exploring what might be the relationship designs of the future.

Love Is An Evolutionary Force

Whenever Jeff Salzman and Patricia Albere get together, spiritual and philosophical sparks fly. Drawing on Salzman’s penchant for applying integral consciousness to our modern social and political landscape and Albere’s profound transmission of the “higher we”, their dialogues have explored everything from the changing role of spiritual leadership in “intersubjective age” to how conscious people should respond to Trump’s presidency, never ceasing to push their way into new terrains of consciousness and insight. On August 8th, these two evolutionary pioneers will turn their attention to Albere’s new book, EVOLUTIONARY RELATIONSHIPS: Releasing the Power of Mutual Awakening, due out in September. As Salzman describes the book: “Patricia Albere has been conducting basic research into what it is to evolve in mutuality other people. This book is a report from the frontiers of her explorations. What she has discovered is that love is not just an emotion but an evolutionary force, a force that drives all the fragments of the universe – including us – toward greater connection and wholeness.” In this special dialogue, Salzman and Albere will take a deep dive into the consciousness that this book was born out of. . . exploring the new potentials for mutuality, wholeness, and evolutionary love.

At our moment in history it is becoming more and more apparent to many of us that we need a new understanding of who we are and what our role is in the universe—one that is informed by a deep sense of unity and connection to the evolutionary process that has brought us to this moment. As Duane Elgin writes in his latest book, “The most urgent challenge facing humanity is not climate change, or species extinction, or unsustainable population growth; rather, it is how we understand the Universe and our intimate relationship within it.” In this conversation between two of today’s leading evolutionary thinkers, Elgin and Albere will explore this new sense of “Bio-Cosmic Identity”—what it is, how it manifests, and what are the obstacles to it’s further emergence in today’s world.

Join Patricia Albere for an intimate exploration of her recent journey with cancer and the miracles that occurred as her individual journey was held inside the larger consciousness of the Evolutionary Collective. Discover what ‘issueless-ness’ is and how we as individuals can be profoundly affected by this greater shared field of awakening and connection. During this interview, Albere will expose a new and powerful possibility for meeting life’s challenges. Please join for what promises to be a profound conversation on Tuesday, May 9th at 11 AM – 12 PM Pacific Time on http://evolutionarycollective.com/conversations/cancer-issuelessness/.

Patricia Albere and author Katherine Woodward Thomas, author of “Calling In The One” and “Conscious Uncoupling: 5 Steps to Living Happily Even After”, bring their depth of relational experience and expertise into new perspectives about what allows for and inspires higher expressions of evolutionary love.

Join Patricia Albere and Daniel Schmactenberger, cofounder of the Neurohacker Collective as they explore how civilization is currently emerging. We know that what we call human civilization currently is radically unsustainable, exponentially accelerating, and unavoidably heading for some kind of fundamental shift. Shift to what, and how, are big questions. What does a viable civilization with our current and future levels of technology look like? And how do we get there?

“BLESSED ARE THE WEIRD” – VISIONARIES OF THE COMING REALITY

“Blessed are the weird people – poets, misfits, writers, heretics, painters and troubadours – for they teach us to see the world through different eyes.” —Jacob Nordby Join Patricia Albere and Jacob Nordby, author of Blessed Are the Weird – A Manifesto for Creatives, as they explore the completely unique, fascinating, and fraught era on Earth in which we are now living. For those with the eyes to see it, it’s clear that even in the midst of our current challenges and polarization, we are on the precipice of a world of incredible new possibilities. Who are the outliers, the creatives, the ‘weird’ ones who are needed to usher in this new era? Is it possible that a new kind of ‘belonging’ is coming into existence where the visionary misfits who have always worked alone on the fringes are now being called upon to unite to create this new world?

The 9 Waves of Creation

Join Patricia Albere and author Carl Johan Calleman, PhD as they discuss his latest book: “The Nine Waves of Creation – Quantum Physics, Holographic Evolution and the Destiny of Humanity”. They will explore how the evolution of the universe, including that of humanity and our own planet, is directly a function of the nine waves of creation described by the Mayan calendar. These waves determine the potentialities of the future as well as of the past and provide our main guide to the future. For the first time in human history all nine waves of creation are active and can be downloaded by human beings. The ninth and highest of these waves is the one bringing unity consciousness to those in resonance with it. How can we align with this wave and what spiritual practices are available to bring us into resonance with higher orders of unity?

In his most recently released book, “The Divine Dance: The Trinity and Your Transformation”, globally recognized ecumenical teacher Fr. Richard Rohr describes God as relationship itself, and shares the true roots of the early Christian trinity was an unending circle of giving and receiving between Father, Son and Spirit. In this Evolutionary Collective Conversation, Fr. Richard and Evolutionary Collective Founder Patricia Albere will explore the current spiritual paradigm shift through the lens of the Trinity, inquiring into how the Trinity illuminates the deeper nature of God and how we, as human beings, can enter into communion with the Divine and with each other. They will also discuss what the ‘Law of Three’ is, and how the three forces work. What is the rhythm of this New Creation, and how is it inviting us to join in the Divine Dance? Find out in what promises to be a rich conversation.

© 2020 OwlTail All rights reserved. OwlTail only owns the podcast episode rankings. Copyright of underlying podcast content is owned by the publisher, not OwlTail. Audio is streamed directly from Patrica Albere servers. Downloads goes directly to publisher.