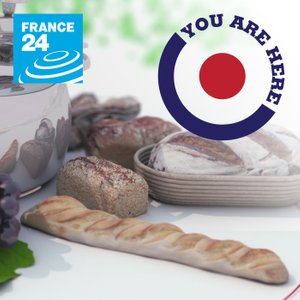 From young apprentices to accomplished craftspeople, from farmers to Michelin-starred chefs, we meet the people keeping French heritage alive. Saturday at 7:15am.

From young apprentices to accomplished craftspeople, from farmers to Michelin-starred chefs, we meet the people keeping French heritage alive. Saturday at 7:15am.

END_OF_DOCUMENT_TOKEN_TO_BE_REPLACED

Read more
Batz is an emerald green island off Roscoff, in France's Brittany region. This land of a few square kilometres has 507 permanent residents; islanders who live off either tourism or farming. There are also day visitors, those who stay longer and a few lucky ones who have the privilege of owning a second home there. In summer, some 2,000 tourists arrive every day, a change of pace that the islanders prepare several months in advance. All the island's inhabitants are supplied by a barge, which makes a daily crossing to Roscoff.

Read more
In the town of Saumur in France's Loire Valley, the riders of the Cadre Noir represent excellence in the world of French equestrianism. The military-style academy trains elite riders who take part in top international competitions. Its expertise has been recognised by UNESCO, which listed it as Intangible Cultural Heritage in 2011. FRANCE 24 takes you behind the scenes of the stables.

Read more
This French Renaissance-style castle would probably have remained largely unknown if it hadn't become home to the secret wife of Louis XIV, Madame de Maintenon. Françoise d'Aubigné – her real name – was a woman of humble origins who is often compared to Cinderella. After Louis secretly married her, the Château de Maintenon underwent numerous transformations as she put her own stamp on it. Meanwhile, the French-style garden was designed by renowned landscape architect André Le Nôtre but was only laid out in 2013.

Read more
He was a genius who left a lasting mark on France. As military architect to King Louis XIV, Vauban imagined a series of impregnable citadels to protect the country, from Besançon to the Ile de Ré. Each time, the architect reinvented himself to take into account the local geography and landscape. Today, many of these buildings remain key French landmarks. We take a closer look.

Read more
Since 2018, a strange creature has been stalking the streets of the south-western French city of Toulouse. Standing 13 metres tall and weighing in at 46 tonnes, Asterion the Minotaur is a giant wood and steel puppet who has become one of the city's emblems. This unusual artistic language is made possible thanks to extraordinary mechanics: a French-made exoskeleton controlled by five operators who move the minotaur's arms, torso and head. The hard work put in behind the scenes by the designers, technicians and operators turns this giant puppet into a genuine work of art.

Read more
More than 20 years ago, a community of men and women in the French region of Burgundy set themselves a massive challenge: to build a castle using the techniques of the Middle Ages. The site in the town of Guédelon is open to visitors, offering them an immersion into the 13th century. Today, nearly 40 people work every day on this medieval construction site. Stone quarrying is the first step in building a castle. And to transport the stones to the site, modern machines are banned: everything is done like in the 13th century, with horsepower.

The giants of the River Seine

Read more
The French port of Rouen hosts some of the biggest cargo ships in the world. But to get there, these giants of the seas have to be guided over the 80 kilometres of the Seine estuary. Navigating the river is risky for these huge ships. To guide them, expert pilots board the cargo ships at sea and take them to port. We go on deck with them.

Read more
Some 300 million pairs of socks are sold in France every year. Although most are made in China, some small French firms are carving out a market with their "made in France" offerings. One of them is Broussaud. For three generations, this family-run business based in the Limousin region has been constantly innovating, with increasingly complex designs. FRANCE 24 went to find out the secret of its success.

The virtues of France's most remarkable trees

Read more
We take you to discover some of France's most remarkable trees. In the village of Lucheux, in the northern Somme region, two triple-centenarian lime trees have intertwined over time to become one. They have even played a part in village history: for the past 300 years, they have shaped the future of married couples. Meanwhile, in the Seine-et-Marne region east of Paris, a Japanese sophora (pictured) arouses wonder and curiosity in observers. It stands in the grounds of a school for teenagers with learning difficulties, who regularly draw the tree.

Read more
In the French region of Burgundy, home to the city of Dijon, it's not just the grapes that are famous. The region's other star fruit is the blackcurrant. A whole market has emerged based on the cultivation of this small berry. Today, the precious black fruit is transformed in many ways. Its best-known use in France is in the production of the famous liqueur known as crème de cassis, but blackcurrant is also used in cooking and even in the cosmetics and pharmaceutical industries. We take a closer look.

Read more
A masterpiece of classical architecture, the Château de Vaux-le-Vicomte, located outside Paris, was the forerunner of Versailles. Contained within its walls are three and a half centuries of history. That legacy is now the responsibility of the three brothers who inherited it on the death of their father: Ascanio, Alexandre and Jean-Charles. The château is regularly the scene of construction sites but some restoration must be done by hand, for instance to restore the central wrought iron gates to their former glory. FRANCE 24 takes you behind the scenes.

The guardians of Paris's River Seine

Read more
The River Seine is the beating heart of Paris. The banks of the river attract 8 million visitors each year, making it one of the busiest places in the French capital. We meet those who take care of the Seine seven days a week, from the technicians checking water quality to members of the river patrol, who respond to emergency call-outs and use radar to explore the river's depths.

Read more
Every second in France, 57 kilos of cheese are produced; that's nearly 2 million tonnes a year. In the French city of Tours, the cream of cheesemakers from around the world compete to win the title of World's Best Cheesemaker. From choosing food to go with their cheeses, to blind tests, to putting together a cheese platter, they put their expertise to the test. The Belgians, Dutch and Japanese regularly make it to the podium, providing stiff competition for the French cheesemakers.

Inside the legendary Hotel Negresco in the French city of Nice

Read more
The Negresco is a legend in the world of luxury hotels. Located on the Promenade des Anglais in Nice, just opposite the Mediterranean, it's emblematic of the French Riviera city. The hotel is not owned by a tourism or hotel group, making it one of the few totally independent luxury hotels in France. From the ground floor all the way up to the top, works of art are everywhere: Eiffel stained glass, a Baccarat chandelier and an official portrait of Louis XIV. We bring you a behind-the-scenes look at this jewel of the Belle Époque.

Read more
We bring you the story of the Royal Palace, a family dance hall in the eastern French village of Kirrwiller that has become the country's third-largest cabaret after Paris's Moulin Rouge and Lido. Now famous throughout Europe, the Royal Palace attracts 200,000 visitors every year. Behind its success is Pierre Meyer, a former cook who took over his parents' dance-floor restaurant. On stage, Alla Samorodska, a 35-year-old Ukrainian, excels as the lead lancer.

The marshes of Bourges in France's Loire Valley

Read more
The city of Bourges in central France is famous for its UNESCO-listed cathedral and medieval city centre. But the capital of the Berry region has another historic asset: its marshes, a labyrinth of vegetable gardens. Located a few minutes from the city centre, the people of Bourges have enthusiastically maintained them for more than a century. This small corner of paradise is now attracting more and more city dwellers looking for peace and quiet. FRANCE 24 takes you to discover this unique but fragile ecosystem.

Read more
Strictly regulated for the past two years due to the Covid-19 pandemic, the Guadeloupe Carnival is usually an unmissable event on the French Caribbean islands. From January to March, Guadeloupeans live to the rhythm of the parades, led by dozens of groups of volunteers. For participants, it's often the consecration of a year of hard work. FRANCE 24 went to soak up some of the Carnival atmosphere.

France's Jura region, a wild land with a rich heritage

Read more
Located on the border with Switzerland, France's Jura region is a wild open land, a paradise for cross-country skiers and snowshoers. Only a few hardy souls come to attempt the Grande Traversée, a hiking-skiing route more than 100 kilometres long. It sets off from Mouthe, the coldest village in France. Meanwhile, from makers of Comté cheese to those who create wooden cladding known as "tavaillons", the region's heritage is lovingly preserved.

Read more
The eastern French town of Lunéville has played a key role in France's fashion history. It's the birthplace of Lunéville stitch embroidery, which features on UNESCO's intangible cultural heritage list. To teach it, there is only one person left: Aude. Her students come from all over the world to learn the techniques passed on to her by her grandmother. We also take you behind the scenes at Hermès, whose square silk scarves are made by a highly skilled team near the French city of Lyon.

Read more
With its 2,500 castles, the Loire Valley is the cradle of the French Renaissance. But this priceless heritage requires constant maintenance. With state-of the-art technology, as well as historical research and know-how, French artists and craftspeople are innovating to return these gems of the past to their original state. We take a closer look.