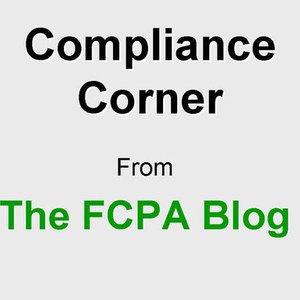 News And Views About The Foreign Corrupt Practices Act And More 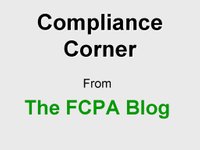 Elizabeth Spahn, a professor at the New England School of Law, stopped by this week. She left a comment about Andy Spalding's latest post. In it, she cited her recent article that asks the questions: Why is there so little legal scholarship regarding international bribery? Why aren't law professors training their students on the issue? Why, she asks, don’t legal educators want to talk about international anti-corruption initiatives? . . . Read the entire post at The FCPA Blog   www.fcpablog.com

With so much to lose by going to trial, how many organizations and people will plead guilty to white collar crimes they didn't commit? Ellen Podgor of Stetson University College of Law and the White Collar Crime Prof Blog asks that question in her latest essay, "White Collar Innocence: Irrelevant in the High Stakes Risk Game." She looks at three defendants who claimed their innocence at trial but were convicted -- Arthur Andersen LLP, Jamie Olis, and Jeffrey Skilling. And three who pleaded guilty and avoided trials -- KPMG, Gene Foster, and Andrew Fastow. The second group, she says, enjoyed reduced sentences and finite results. . . . Read the entire post on The FCPA Blog   www.fcpablog.com

Let's talk about Mr. Bourke. He was sentenced Tuesday to a year and a day in jail and fined a million dollars for conspiring to violate the FCPA and lying to FBI agents. People in the courtroom said when he was convicted, Bourke was shocked. So apparently he never expected the jury to find him guilty. But when he was sentenced, he was happy and relieved. So he must have been expecting a lot worse. And that probably means the DOJ never offered him a deal with so little jail time. . . . Read the entire post on The FCPA Blog   www.fcpablog.com

Blackwater And The FCPA

The New York Times alleged yesterday that executives at the private military security firm formerly known as Blackwater Worldwide authorized secret payments of about $1 million to Iraqi officials that might have violated the Foreign Corrupt Practices Act. The payments were "intended to silence [the officials'] criticism and buy their support after a September 2007 episode in which Blackwater security guards fatally shot 17 Iraqi civilians in Baghdad," the Times said. . . . Read the entire post on The FCPA Blog  www.fcpablog.com

Bourke Gets A Year In Prison

Frederic Bourke, the American entrepreneur who led a charmed life and whose prosecution brought new prominence to the Foreign Corrupt Practices Act, has been sentenced to a year and a day in prison and fined $1 million for investing in a bribe-tainted deal in Azerbaijan and then lying to FBI agents about it. . . . Read the entire post on The FCPA Blog   www.fcpablog.com

Before getting to William Jefferson, this reminder: Frederic Bourke is scheduled to be sentenced in Manhattan today (Tuesday, November 10) at 2:30 pm. He could be jailed for up to ten years for conspiracy to violate the Foreign Corrupt Practices Act and lying to federal investigators. Now Jefferson: He'll learn his sentence this Friday in Alexandria, Virginia. Prosecutors want him jailed for 27 to 33 years. And once again there's a question whether the jury found Jefferson guilty of any FCPA-related offense. This time the answer could influence how long he'll spend behind bars. Here's the issue. . . .

Last week, the U.S. ambassador to Kenya, Michael Ranneberger, made a very strange announcement. He confirmed on his Twitter page that the U.S. government had denied a visa to Kenya's attorney general Amos Wako. What's strange is that as far as we know, it's the first time an American official has ever revealed a visa determination under Presidential Proclamation 7750. That's the executive order giving the State Department the power to exclude foreign kleptocrats, their families and friends. Before now, those decisions had always been made -- and kept -- in complete secrecy. . . Read the entire post on The FCPA Blog   www.fcpablog.com

In the western China municipality of Chongqing, a special deployment of 25,000 police officers was called in to fight organized crime. Chongqing city proper has around five million people but the region-- called the "municipality" -- has closer to 32 million (California's population is about 36 million). Last month, police said they had so far detained 4,893 suspected gangsters and formally arrested about 1,500. Among the 30 or so municipal officials being held are a former deputy police commissioner and the head of the justice bureau, Wen Qiang. . . . Read the entire post on The FCPA Blog  www.fcpablog.com

The London lawyer accused by the U.S. of being a middleman in KBR's bribery of Nigerian officials appeared in court last week to fight extradition. Jeffrey Tesler, 61, a U.K. citizen, was indicted in February by a federal grand jury in Houston. He was charged with one count of conspiring to violate the Foreign Corrupt Practices Act and ten substantive FCPA offenses. If convicted on all counts, he faces up to 55 years in prison. U.K. police, acting at the request of U.S. authorities, arrested Tesler in March. . . . Read the entire post at The FCPA Blog   www.fcpablog.com

The lawsuit examining how three African rulers and their families managed to acquire dozens of luxury homes, cars and other assets in France has been stopped. A Paris magistrate had ordered the investigation in May at the request of Transparency International. See our post here. But last month an appellate court agreed with the Justice Ministry that TI lacked standing to bring the case. . . . Read the entire post on The FCPA Blog   www.fcpablog.com