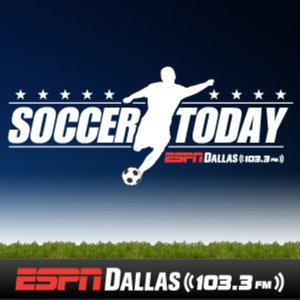 A weekly radio show devoted to coverage of The Beautiful Game domestically and internationally, with a focus on Major League Soccer, England’s Premier League and the U.S. Men’s National Team. Hosted by Steve Davis and Tyler Kern.

On this week's episode of ESPN Soccer Today:We kick off this week's show with a rant from Tyler about some statements made by an MLS coach. What got him so fired up? Find out in the first 10 minutes of this week's episode.MLS Week 5 had some crazy scorelines and fantastic goals. Steve &amp; Tyler talk about the weekend's action.Who saw their stock rise after this latest round of USMNT camps and whose dropped? Tyler Adams had a beautiful assist on Saturday, which prompted a question: when should a coach adjust his strategy to accommodate a special player?

Ahead on this week's episode of ESPN Soccer Today:-Show founder and avid Manchester City fan Marc Stein joins Steve Davis to put a bow on City's title winning season.-#ArseneOut finally happened at Arsenal. What comes next? Steve is joined by Arsenal fan and play by play broadcaster Mark Followill to get his thoughts.-More thoughts on FC Dallas and the USMNT from Steve.

On this week's episode of ESPN Soccer Today:-The Zlatan show has landed in the United States and he announced his presence in a major way. Steve and Tyler take a dive into his debut and his impact on the Galaxy.-It was an incredible week of Champions League action. Can Manchester City dig out of the 3-0 hole against Liverpool? And how incredible was Cristiano Ronaldo's overhead kick goal? -Steve and Tyler pop around Major League Soccer and check in on FC Dallas through their first four games of the season.

On this week's episode:-What's burning on our soccer minds? Steve and Tyler open the show with the things they've been thinking about this week. -We run through all of the MLS games on Saturday after another predictably unpredictable week.-Are there clichés that you hear on game broadcasts that drive you crazy? We've heard some recently that we found pretty questionable.-We popped around Europe quickly to touch on Juventus/Tottenham and PSG's continued Champions League struggles.

On this week's episode of ESPN Soccer Today:Steve and Tyler break down Gregg Berhalter's roster for the upcoming March friendlies. There were certainly some surprise inclusions and exclusions. Let's talk about them.The guys pop around week 3 of the MLS season. It was a big week for Wayne Rooney, not so much for Orlando City. Was David Beckham standing on the set of a zombie movie or introducing Inter Miami's future home? It was hard to tell. Let Steve and Tyler explain.

The World Cup is over but there's still so much soccer to talk about! On this week's episode of Soccer Today...-We took one last look at the World Cup Final. Is this the start of a dynasty for France? And how should history remember this Croatia team?-There's a lot of new buzzing around Major League Soccer. A teen phenom could be on the move, drama surrounds the LAFC/Portland US Open Cup match, and a torrid goal-scoring pace for one man.-Now that the 2018 World Cup is over we can turn an eye towards 2022. Who might end up on the roster for the USMNT? We also took a look back at roster predictions from 2014 and wonder what ever happened to some of the names on those lists.

It's all about "Top 3" on this week's show: Tyler and Steve rank their Top 3 story lines in Major League Soccer, Top 3 trouble spots in MLS, Top 3 U.S. national team men of the moment, Top 3 league races they are following around the world and more. All about rankings ... and who doesn't love rankings?

On this week's episode of ESPN Soccer Today:-Steve and Tyler took a dive into who's in and who's out in Major League Soccer. Will DC United make the playoffs? Can FC Dallas snag a top two spot in the West? How do you feel about Kyle Beckerman's rat tail? Get your answers here.-Matchday 1 of the Champions League is in the books. Let's take a dive into the major storylines that have emerged after the first week of action. -Christian Pulisic turned 20 years old and scored two goals this past week. We took a moment to celebrate the young American and his talents as he rolls into his twenties. As always, we would appreciate it if you share the show with your friends and give us a review on iTunes. You can also follow the show on Twitter at @ESPNSoccerToday.

On episode 435 we take an early look at the 24th MLS Cup final; it's a week away now. We also catch up on other Major League Soccer news, and we start gazing ahead on the soccer calendar. Soccer Today is presented by Toyota.

On this week's episode of ESPN Soccer Today:World Cup fever has taken over the studio. Steve is so pumped up that he's even watching all of the friendlies leading up to the first kick. Also, Zinedine Zidane made the decision to leave Real Madrid after winning his third straight Champions League title. Did he make the right decision?Next, we caught up with our friend Mark Followill as he prepares to call a full slate of World Cup games for Fox. How does he prepare for these matches and what has he learned about the teams involved? Hear what the TV voice of FC Dallas has to say. Finally, something stood out about the U.S. Soccer Hall of Fame's rollout of their new class of inductees. Hear what got under Tyler's skin and why Steve wasn't surprised in the least.

November 10: USMNT vs Canada (Round 2), Big Year for Women's Soccer

We talk about the men's national team and its upcoming date with Canada – and how important it is for Gregg Berhalter. We also have a conversation about women’s soccer and whether 2019 will be seen as a breakthrough year in the global game. And we bounce around the Premier League a bit. It’s all on Episode 436 of Soccer Today; the show is presented by Toyota.

This week we talk about ALL the soccer: Women's World Cup, CONCACAF Gold cup, Copa America and the U.S. Open Cup. And, yes, we continue to debate the 13-0 result for the U.S. women. It's all on episode 416 of Soccer Today.

On this week's episode of ESPN Soccer Today:-What have we learned after two weeks of the Premier League season? Arsenal start their season with back to back losses, Chelsea looks revitalized, and Jose Mourinho is unhappy. -There are developments in the possible move of Columbus Crew SC to Austin, TX. Would this be a good move for the club and the league? And do teams have an obligation to the communities they inhabit?-Josef Martinez is on a collision course with history. The question isn't whether or not he'll break the record, but how high will set the bar. Also, we previewed a first in the broadcast booth for a game on Sunday night.

June 23: USWNT at the World Cup, USMNT Turning a Corner?

On show 417 we look at the U.S. women's and men's national teams, both getting into the business end of their ongoing competitions, the FIFA Women's World Cup and the CONCACAF Gold Cup respectively. We also look at a certain FC Dallas youngster who just might push his way into the national team conversation sooner rather than later.

October 20: The USMNT in Crisis and MLS Playoffs

On Episode No. 433 we talk about a U.S. men's national team that just can't get the engine started on the big rebuild. We also get into MLS playoffs and how the local team bowed out – in a loud and perhaps even encouraging way. The Soccer Today radio show and podcast are presented by Toyota.

On this week's episode of ESPN Soccer Today:-In the wake of Clint Dempsey's retirement, Steve and Tyler highlighted some of the biggest moments of his career. From the chip vs Juventus to the opening goal vs Ghana in 2014, relive some of the best moments from a great career. -The Champions League draw always gets us excited about matchups we have to look forward to throughout the year. We talked through the Champions League groups and highlighted some of the matches we can't wait to watch.-In the final segment, find out why Saturday's soccer final in the Asian Games meant so much to one player. Also, in the midst of a tough season, was it the best idea for the Chicago Fire to travel overseas? Get all of this and more packed into 45 minutes on this week's episode of ESPN Soccer Today!

Did we just witness the match of this World Cup? Steve Davis will tell you why he thinks France vs. Argentina was the game of the tournament. Also, we break down what happened to Germany, have a lightning round of quick hitting topics, and Tyler explains why he isn't disappointed that Messi and Ronaldo are out of the tournament.

On this week's episode of Soccer Today:-Germany escapes disaster.-What's wrong with Argentina?-France got something right.-Ridiculous moments from the World Cup and MORE!

September 8: The Fallout from the USMNT vs Mexico

This week we go in hard on the U.S. national team. examining the clunker vs. Mexico. What does it mean for the US style of play, for manager Gregg Berhalter's designs and what does it mean for a few players in the national team pool? We also look at Major League Soccer’s ongoing, maddening policy of playing matches during the international break. It’s all on episode Episode 428 of Soccer Today. The show is presented by Toyota.

Ahead on this week's episode of ESPN Soccer Today:-It was a big weekend around MLS with a lot of implications for playoff positioning. There was also a major record broken and player who could leave a Western Conference contender. Tyler and Steve have you covered on all the MLS news.-Across the pond, the Bundesliga season got underway which means plenty of Americans were in action. With a couple large friendlies looming at the beginning of next month, what will it take USMNT fans to turn the page?-Is artificial turf a problem in MLS? A new soundbite from Zlatan Ibrahimovic has reignited the debate between grass and turf.

© 2020 OwlTail All rights reserved. OwlTail only owns the podcast episode rankings. Copyright of underlying podcast content is owned by the publisher, not OwlTail. Audio is streamed directly from FC Dallas servers. Downloads goes directly to publisher.