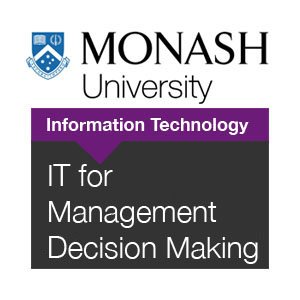 FIT5094 IT for Management Decision Making

A podcast of lectures and tutorial sessions looking at the use of information technology to support managerial decision making.

This week concludes the semester with a look at the issue of governance and the sourcing of decision support for managers.  The argument is made that the need for DSS to adapt and change means that governance approaches for this kind of technology need to be different to other kinds of IT resources.The lecture concludes with a summary of the semester and discussion of the exam.

This week's lecture looks at the large scale systems often used in today's organisations to formally provide support to managerial decision makers.  In addition to BI systems themselves, we also look at their pre-cursor: executive information systems (EIS).

Data warehouses are a technology that provides the data infrastructure for the development of a variety of systems that are used to support management decision-making (most notably business intelligence systems, but personal DSS can also make use of them).  As such, they are not decision support systems in and of themselves, but rather provide an integrated repository of high-quality data sourced from various organisational systems and other sources.The lecture looks at data modelling techniques for data warehousing (dimensional modelling) as well as development models (SDLC variations) and architecture models (enterprise warehouses versus various data mart structurtes).

This week we look at a personal DSS technique called Systems Dynamics.  This is a modelling approach that allows decision analysts to simulate dyamic relationships between variables in a decision situation.  Aside from covering a specific decision analysis technique, the lecture is intended to give insight into the kinds of engagements a personal DSS developer would undertake, as distinct from business intelligence practitioners.

This week is a turning point in the unit as we turn our attention to the information systems topics of IT for management support.  This week's lecture addresses the problems of managing the development process for a DSS - in particular why evolutionary development methods are important.  We look at seminal work by Peter Keen, as well as work by Sprague and Carlson.  We also look at some Monash projects that address the topic of evolutionary development, and the Monash Personal DSS development method.

This week's lecture continues with our examination of descriptive theories of decision making, looking at the concept of cognitive biases.  A taxonomy of different biases is presented, and the argument is made that the theory is a useful tool for systems analysts grappling with the problem of how to initiate the design process for decision support systems.

Last week's lecture dealt with normative models of decision-making: models that describe how people should make decisions if they are to be considered rational.  This week we look at models that describe how people really make decisions.  We look at two specific models: Simon's model based on his concept of bounded rationality, and the 'MRT' model from Mintzberg, Raisinghani and Theoret.Both of these models are what are known as 'phase' theorems - treating decision making as a series of phases broadly including understanding the nature of the decision situation, searching for or developing options and then selection of a specific course of action.

This week we begin looking at the task of making decisions and theories that help to explain them.  Our focus this week is on normative models of rational choice - normative in the sense that they outline a standard of how decisions should be made.  Next week we'll turn our attention to descriptive theories that highlight how people actually don't make decisions like this in real life.The models that we look at include the dominant theory of rational decision-making - the Rational Choice Model and the concept of subjective expected utility.  We look at how these theories can be deployed during decision analysis, as well as question some of the assumptions of the model.

When designing any information system, a key requirement is to understand both the user and the task that the system is required to support.  With IT used for management support, this requires understanding the nature of managers, management and the different kinds of information needs associated with managing.  We look at why managers are significantly different to other kinds of IT users and argue that IT has a fairly limited (albeit important) role to play in managerial work.

© 2020 OwlTail All rights reserved. OwlTail only owns the podcast episode rankings. Copyright of underlying podcast content is owned by the publisher, not OwlTail. Audio is streamed directly from Rob Meredith servers. Downloads goes directly to publisher.